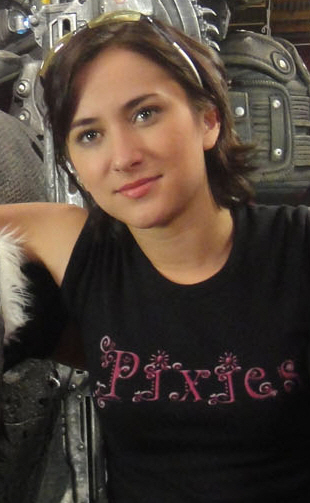 Zelda Rae Williams (born July 31, 1989)[2][3][4] is an American actress and the daughter of Robin Williams and Marsha Garces Williams.

Zelda was born in New York City[5] to Robin Williams and his second wife, Marsha.[6] Robin Williams stated that he named her after Princess Zelda of The Legend of Zelda video game series.[7][8][9][10] Her mother is of Filipino and Finnish descent.[11][12] Zelda, the older of Williams's children by his second wife, has a younger brother, Cody, and an older half-brother, Zachary Pym "Zak" Williams.[13]
Read more...

She made her acting debut at age 5. At 15, Williams acted in the 2004 film House of D opposite her father and late actor Anton Yelchin as the latter's young first love, Melissa Loggia.[6]

In June 2011, both Zelda and Robin were featured in a television commercial for the Nintendo 3DS game The Legend of Zelda: Ocarina of Time 3D.[14] On October 25, 2011, she was the special guest host at the London Zelda Symphony Concert at the Hammersmith Apollo, marking the 25th anniversary of the Zelda Series. On November 17, 2011, subscribers to Nintendo emails received an email of her and her father playing the new game The Legend of Zelda: Skyward Sword for the Wii console. She appears in an interview with Nintendo representatives in which she says that one of her favorite things to do in her free time is play Super Smash Bros. Melee with her friends, always playing as the character Sheik.

She appeared in People magazine's 100 Most Beautiful People issue for 2007.[6] She appears in the Wynter Gordon music video for "Buy My Love" and has a cameo in the Cobra Starship music video "You Make Me Feel", alongside her father.[15]

Williams has described herself as an avid athlete[16][page needed] and video game player, and a fan of her namesake The Legend of Zelda series. She has stated that The Legend of Zelda: Majora's Mask is her favorite game and had voiced support of its release on the 3DS by supporting Operation Moonfall until Nintendo finally announced the game on November 5, 2014.[17]