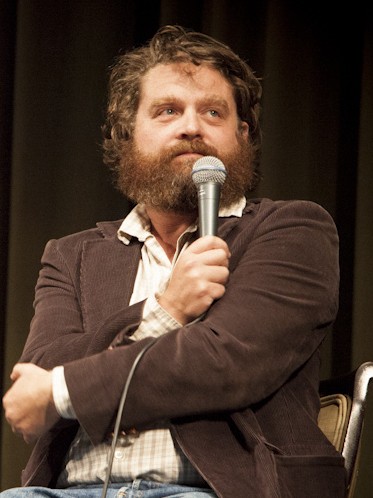 Galifianakis is the host of the Emmy Award-winning talk show Between Two Ferns with Zach Galifianakis on the Funny or Die website. He currently stars in the FX series Baskets.

Galifianakis was born in Wilkesboro, North Carolina.[3] His mother, Mary Frances (née Cashion), was a community arts center owner, and his father, Harry, a heating oil vendor.[4] His mother is of Scottish ancestry, and his paternal grandparents, Mike Galifianakis and Sophia Kastrinakis, were emigrants from Crete, Greece.[5][6] Galifianakis was baptized in his father's Greek Orthodox church.[7][8][9][10] He has a younger sister, Merritt, and an older brother, Greg.[11] His cousin is Washington Post cartoonist Nick Galifianakis.[12] His uncle, a politician, is also named Nick Galifianakis. Galifianakis attended Wilkes Central High School, and subsequently attended but did not graduate from North Carolina State University, where he was a communication major.[13] While in college, he worked at a public access station. He taught a waltz class in 1991 where he crossed paths with Mary J. Blige.[14]
Read more...

He began acting on television, guest-starring in Boston Common and joined Saturday Night Live as a writer but lasted only two weeks.[15] Galifianakis co-starred in the film Out Cold, and had small roles in Corky Romano, Below, Bubble Boy, Heartbreakers, Into the Wild, Super High Me, Little Fish Strange Pond and Largo.

Galifianakis on Inside Joke in New York City in 2006

In September 2001, he appeared in one episode of Comedy Central Presents. It included a stand-up routine, a segment with a piano, and a cappella group The Night Owls (introduced as his "12 ex-girlfriends") singing "Eternal Flame" by The Bangles while he made jokes. In 2002, he hosted his own VH1 talk show called Late World with Zach. It featured many of his friends and regular performers from the LA comedy and music venue Largo where he appeared frequently during this time period. One episode featured Largo regulars Jon Brion and Rhett Miller as musical guests. He played Davis in the Fox drama series Tru Calling.[7] He appeared many times on Jimmy Kimmel Live! and played Frisbee in four episodes of Reno 911!.

Galifianakis played Alan Finger on the Comedy Central show Dog Bites Man, a fake news program that caught people during candid moments thinking they were being interviewed by a real news crew. He also guest-starred in the episode of the Comedy Central show The Sarah Silverman Program as Fred the Homeless Guy. He also had a recurring guest role as a doctor on the animated Adult Swim show Tom Goes to the Mayor and appeared in several episodes of Tim and Eric Awesome Show, Great Job! in a recurring role as Tairy Greene. In 2006, Galifianakis appeared in Fiona Apple's music video for the song "Not About Love", where he is seen lip-synching the lyrics to the song. A year later, Kanye West employed Galifianakis and indie rock musician Will Oldham for similar purposes in the second version of the video for his song "Can't Tell Me Nothing". In June 2006, Galifianakis released the single "Come On and Get It (Up in 'Dem Guts)",[16] a comedic hip-hop dance song which features Apple's vocals.

Galifianakis, Patton Oswalt, Brian Posehn and Maria Bamford, are the four Comedians of Comedy, a periodic packaged comedy tour in the style of The Original Kings of Comedy and the Blue Collar Comedy Tour. They chose to perform at live rock clubs as opposed to comedy clubs to try to reach a different audience. Much of the tour was taped and has been featured in both a short-lived TV series on Comedy Central and a full-length movie that has appeared at SXSW and on Showtime. On February 22, 2008, he made an appearance on the Jackassworld.com: 24 Hour Takeover. He interviewed various members of the Jackass cast. Galifianakis starred in first leading role in the independent film Visioneers which played in select cities in 2008.[17] The film which was released on direct-to-DVD. That same year, Galifianakis appeared in a web video series of advertisements for Absolut vodka, along with Tim Heidecker and Eric Wareheim, creating a parody of the Golden Girls in which one has a deep anger issue, breaking the fourth wall in exasperation and outright violence on the set.[18] He also completed the pilot Speed Freaks for Comedy Central.

Zach's 2006 stand-up concert film Zach Galifianakis Live at the Purple Onion was one of the first original programs from Netflix.[19]

Between Two Ferns with Zach Galifianakis

Galifianakis played Alan Garner in the hit comedy The Hangover and earned the MTV Movie Award for the Best Comedic Performance.[25] He was also prominently advertised in subsequent films that featured him in supporting roles, such as G-Force, Youth in Revolt and Up in the Air.

Galifianakis starred in the HBO series Bored to Death and hosted Saturday Night Live on March 6, 2010 during the show's 35th season, during which he shaved his beard mid-show for a sketch, and closed the show wearing a fake one.[26] He hosted again on March 12, 2011 and shaved his head this time, in a Mr. T-like hairstyle, which was allegedly supposed to be used for a sketch that never aired due to time constraints.[27]

In 2010, he starred in several films, including Dinner for Schmucks, It's Kind of a Funny Story, and Due Date.[28] On October 29, 2010, while debating marijuana legalization on the show HBO's Real Time with Bill Maher, Galifianakis appeared to have smoked marijuana on live television;[29] host Bill Maher denied that it was real marijuana in an interview with Wolf Blitzer during an episode of The Situation Room. In 2011, he reprised his role for The Hangover Part II, which was set in Thailand[30] and voiced Humpty Dumpty in Puss in Boots. Galifianakis starred alongside Will Ferrell in Jay Roach's 2012 political comedy The Campaign.[31] He received critical praise for his performance in the 2014 film Birdman or (The Unexpected Virtue of Ignorance), in which he starred with Michael Keaton, Emma Stone and Edward Norton. In 2017, Galifianakis voiced The Joker in The Lego Batman Movie.[32]

In August 2012, Galifianakis married Quinn Lundberg, co-founder of the Growing Voices charity, at the UBC Farm in Vancouver, British Columbia. On September 7, 2013, Lundberg gave birth to their first child, a boy, and Galifianakis missed the premiere of his film Are You Here to attend the birth.[33] He and his wife welcomed a second son in November 2016.[34]

Lundberg's cousin, Charlie Clark, is the mayor of Saskatoon, Saskatchewan. On the day of the election, Galifianakis made a video endorsing Clark's campaign.[35][36]

In January 2014, Galifianakis and A Night of a Thousand Vaginas co-star Sarah Silverman announced their intention to raise $20,000 to help fund the Texas Abortion Fund, part of a nationwide network of funds set up to assist women in obtaining abortions in states whose legislatures had placed restrictions on the practice. The fundraiser was set up in response to the passage of Texas H.B. 2, which established several restrictions that forced a majority of the state's abortion clinics to close.[37]

Galifianakis owns a farm in Sparta[38] in northeastern Alleghany County, North Carolina, and splits his time between the farm and his work. He said, "My farm is a place that I get to think clearly and pretend to know what I am doing."[39]

Galifianakis befriended a homeless woman in her 80s who was living in a Santa Monica laundromat for 18 years. Galifianakis got her an apartment across the street from the laundromat. The story was revealed in the 2015 documentary Queen Mimi.[40]