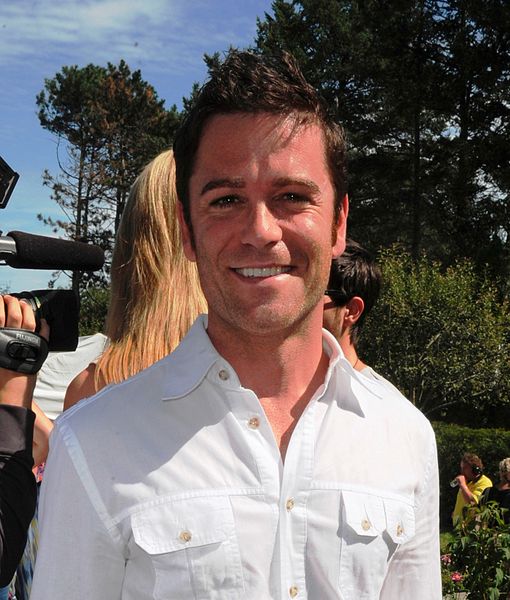 Yannick D. Bisson (born May 16, 1969) is a Canadian film and television actor and director best known to international audiences for playing Detective William Murdoch on the series Murdoch Mysteries.

Bisson was born in Montreal, Quebec, and is of French and English ancestry.[1] He moved to Toronto, Ontario, as a teenager and his acting career began when he was still in high school. His father, noting his son's interest in acting, encouraged him to reply to a newspaper advertisement seeking "child actors".[2]
Read more...

Bisson's first major role was in the CBC's critically acclaimed 1984 movie of the week Hockey Night, alongside Megan Follows and Rick Moranis. He starred in the Canadian television series Learning the Ropes from 1988-89. From 1994-97, he starred in the syndicated action series High Tide, co-starring Rick Springfield. He moved back from Los Angeles to Vancouver, British Columbia in 1998 when he was cast as the lead in CBC'S Nothing Too Good for a Cowboy. From 2000-04, he had a recurring role as attorney Brian Tedrow on the Showtime drama Soul Food.[citation needed]

He starred as the FBI agent Jack Hudson in the PAX TV series Sue Thomas: F.B.Eye[3][4] and in the short-lived CBC drama Nothing Too Good for a Cowboy.[5]

He appeared on Falcon Beach in season two as well as in several Lifetime cable movies, such as Crazy for Christmas and I do (but I don't), and the Disney Channel movie Genius.[6] Bisson was a guest star on Flashpoint[7] and starred in the television movies Brothers by Choice and Keshan. He appeared as Jon in all of the Roxy Hunter movies to date. Bisson is featured in a series of commercials for CIBC. He starred in the 2001 TV movie Loves Music, Loves to Dance based on the book by Mary Higgins Clark. He provided the voice of Ferdie in the children's animated series Maxie's World.[citation needed]

Bisson plays the lead in the CBC Television drama series Murdoch Mysteries[8] and made his directorial debut with the show's fourth-season episode "Buffalo Shuffle".[9]

Starting on December 30, 2013, Bisson starred as a preschool teacher in The Adventures of Napkin Man on CBC Television.[10]

Bisson received the ACTRA Toronto Award of Excellence in 2017 for his lifetime of work.[12][13]

Bisson is married to actress Chantal Craig[16][17] a former fitness instructor who currently works as a television content creator and writer.[18] She now goes by the name Shantelle Bisson[citation needed] and has become an author.[citation needed] They met in high school and married when Bisson was 21.[1] They have three daughters: Brianna, Dominique and Mikaela.[19][20]

Bisson is also an avid bicycle collector and enjoys cycling in any free time possible. The actor enjoys biking as a way to relax and ground himself when his life starts to get hectic.[21]

Bisson formerly worked as a builder between acting jobs to support his family.[22]

Report a problem
Write to Yannick Bisson at FanPal • 2022