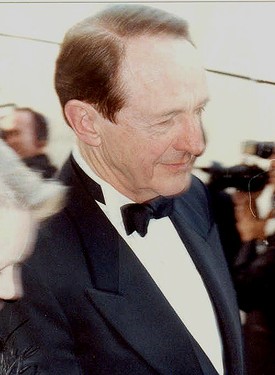 William Joseph Schallert[1] (July 6, 1922 - May 8, 2016) was an American character actor who appeared in dozens of television shows and movies over a career that spanned almost 60 years.[2]

William Schallert was born in Los Angeles, California, the son of Edwin Francis Schallert, a longtime drama critic for the Los Angeles Times, and Elza Emily Schallert (née Baumgarten), a magazine writer and radio host.[1] He began acting while a student at the University of Southern California in Los Angeles but left to become an Army Air Corps fighter pilot in World War II. He returned to UCLA after the war and graduated in 1946.[3][4] In 1946, he helped found the Circle Theatre with Sydney Chaplin and several fellow students. In 1948, Schallert was directed by Sydney's father, Charlie Chaplin, in a staging of W. Somerset Maugham's Rain.[5]

Schallert appeared in supporting roles on numerous television programs starting in the early 1950s, including four episodes (and three different characters) in Dick Powell's Zane Grey Theatre between 1958 and 1961. He was in three episodes of The Rifleman and four episodes of Gunsmoke : season 3, episode 16 "Twelfth Night" in 1957, season 4, episode 16 "Gypsum Hills Feud" in 1958, and as Col. Grant in season 7, episode 27 "Wagon Girls" in 1962, and banker Ezra Thorpe in "The Money Store" season 14 ,episode 14. Schallert portrayed farmer Sam Becker in a 1961 episode of The Andy Griffith Show, whose newborn son is delivered by Andy. He appeared in The Partridge Family as a very humble folk-singing guitar player in "Stage Fright", in 1971. He appeared three times as Major Karl Richmond on NBC's Steve Canyon, starring Dean Fredericks in the title role.[citation needed]

Schallert also appeared in several movies. One of his early cinematic roles was a brief uncredited performance as a police detective in The Reckless Moment (1949) with Joan Bennett and James Mason. He had roles in The Man from Planet X (1951) with Robert Clarke, The Tarnished Angels (1958) with Robert Stack, Blue Denim (1959) with Brandon deWilde, Pillow Talk (1959) with Doris Day and Rock Hudson, Speedway (1968) with Elvis Presley, The Jerk (1979) with Steve Martin, Teachers (1984) with Nick Nolte, and Innerspace (1987), in which he played Martin Short's doctor. Schallert also played (uncredited) an ambulance attendant in the early minutes of the 1950s sci-fi classic Them! (1954). He was a founding member of the Circle Players at The Circle Theatre, started in 1946, now known as El Centro Theatre.[citation needed]

Among eight appearances on the syndicated western anthology series Death Valley Days, Schallert in 1955 portrayed American Civil War General Jesse Lee Reno in the episode "Reno". In the story line, two veterans of the Mexican War who served under Reno (played by Frank Griffin and Stanley Clements), honor him with the naming of the second-largest city in Nevada.[6]He appeared as Sam Clemens in a 1962 episode, "The $275,000 Sack of Flour."

Schallert starred in Philbert, an innovative 1964 television pilot for ABC, which combined live-action camera work and animation. Created by Warner Bros. animator Friz Freleng and directed by Richard Donner, ABC backed out of the series shortly before full production was to begin, although the completed pilot was released in theaters by Warner Brothers as a short subject.[citation needed]

Schallert was probably best known as Martin Lane on The Patty Duke Show. He also appeared as a wise teacher, Mr. Leander Pomfritt, on The Many Loves of Dobie Gillis and as "The Admiral" on Get Smart. On the two former shows he worked opposite actress Jean Byron. Schallert made three guest appearances on CBS's Perry Mason between 1957-1962, including the role of Donald Graves in the series' fifth episode "The Case of the Sulky Girl" and as Dr. Bradbury in the 1961 episode "The Case of the Misguided Missile". He played the role of Nilz Baris in the Star Trek episode "The Trouble with Tribbles"; and much later he portrayed Varani, a Bajoran musician, in the Star Trek: Deep Space Nine episode "Sanctuary".

Schallert played the role of Carson Drew in the television series The Hardy Boys/Nancy Drew Mysteries (1977-1979), featuring Pamela Sue Martin as Nancy Drew. In addition to his onscreen performances, Schallert did voice-over work for numerous television and radio commercials over the years. Among these were a recurring role as "Milton the Toaster" in animated commercials for Kellogg's Pop-Tarts.[7] He had the distinction of appearing in both the original movie version of In the Heat of the Night (1967) and the later NBC TV version in 1992. In 2004, TV Guide recognized Schallert's portrayal of Martin Lane on The Patty Duke Show as No. 39 on its list of "50 Greatest TV Dads".[5]

Schallert served as president of the Screen Actors Guild (SAG) from 1979 to 1981, and afterwards remained active in SAG projects, including serving as a Trustee of the SAG Pension and Health Plans since 1983, and of the Motion Picture and Television Fund since 1977. (His former co-star and television daughter, Patty Duke, also served as SAG president from 1985 to 1988.) During Schallert's tenure as SAG President, he founded the Committee for Performers with Disabilities, and in 1993, he was awarded the Ralph Morgan Award for service to the Guild.

Schallert continued to work steadily as an actor in later life, appearing in a 2007 episode of How I Met Your Mother, the HBO television movie Recount (2008) as U.S. Supreme Court Associate Justice John Paul Stevens, the HBO series True Blood and his distinctive voice brought him work for commercial and animation voiceovers. Appearances in 2009 included a guest role on Desperate Housewives on March 15, in which he played the role of a small newspaper editor; he also appeared in an episode of According to Jim. More recently, he appeared in the January 21, 2010 pilot episode of The Deep End on ABC as a retiring CEO with Alzheimer's disease. He also made an appearance on Medium on the February 5, 2010 episode and a cameo on the June 26, 2011 season premiere of True Blood as the Mayor of Bon Temps. He played Max Devore in the A&E adaptation of Bag of Bones.

In 2010, Schallert made a series of public service announcement videos with Patty Duke and other castmates from The Patty Duke Show for the Social Security Administration, which can be found at www.ssa.gov.[8] His last television appearance came in 2014 on an episode of the sitcom 2 Broke Girls.

In a 2014 interview, Schallert said that he was suffering from peripheral neuropathy, forcing him to wear leg braces while effectively confining him to a wheelchair. He said about his condition: "They help me stay balanced if I use a walker, but it’s just easier to get around in a wheelchair". While not ruling out working on stage in the future, Schallert said "working in film or TV would be too difficult now. Besides, I did my share!"[9]

Schallert died on May 8, 2016 at his home in Pacific Palisades at the age of 93, six weeks after the death of his on-screen daughter Patty Duke on March 29.[11]