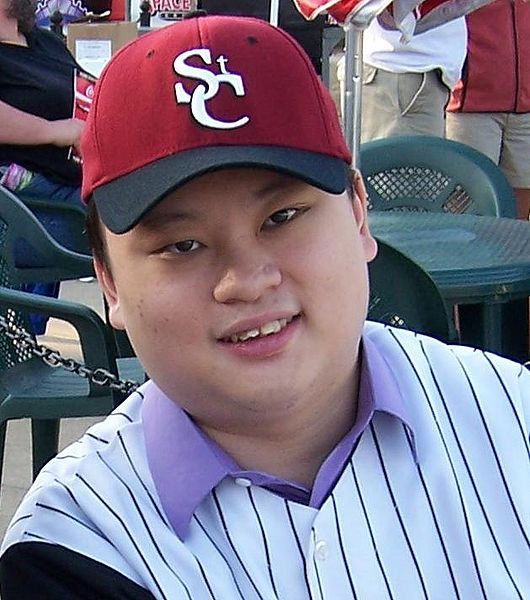 William James Hung, also known as Hung Hing Cheong, is a Hong Kong-born American former singer who gained fame in early 2004 as a result of his unsuccessful audition performance of Ricky Martin's hit song "She Bangs" on the third season of the television series American Idol.

At the time of his audition, Hung was a civil engineering student at UC Berkeley. After his spirited audition to be the next American Idol, he inadvertently won the support of many fans. Hung voluntarily left university to pursue a music career. His recording career was marked by constant negative critical reaction, and his fame became the subject of much controversy as both he and his fans were accused of promoting and endorsing racial stereotypes against Asians, as he was perceived to lack musical talent and be celebrated only for embodying these stereotypes.

He brought his own career as a musician to an end when in 2011 he accepted a job opportunity as a technical crime analyst for the Los Angeles County Sheriff's Department, and decided to pursue law enforcement instead of music. Since then, Hung has reflected positively on his pop music career.

Originally from Sha Tin, Hong Kong, Hung moved to Camden, New Jersey in 1993 and graduated from the John H. Francis Polytechnic High School in Los Angeles. He was a student at University of California, Berkeley, and later dropped out to pursue his music career.

While studying civil engineering at the University of California, Berkeley, Hung auditioned for the third season of American Idol in San Francisco in September 2003, becoming the final auditioner on the January 15, 2004 show.

"I want to make music my living," said Hung, before he started singing and dancing to Ricky Martin's "She Bangs". As judges Randy Jackson and Paula Abdul tried to restrain their laughter, judge Simon Cowell dismissed Hung's performance, remarking "You can't sing, you can't dance, so what do you want me to say?", to which Hung replied, "Um, I already gave my best, and I have no regrets at all." Jackson and Abdul applauded his positive attitude, with Abdul remarking, "That's the best attitude yet." Hung's response to Cowell's criticism starkly contrasts with the often confrontational rejoinders of other contestants. Hung added, "...you know, I have no professional training of singing and dancing," eliciting mock surprise from Cowell, who replied, "No? Well, this is the surprise of the century." Hung was not admitted through to the next round.

Hung performing at Haas Pavilion in 2006

Remixes of Hung's audition performance topped song request lists at a number of radio stations. An online petition to get Hung back to American Idol included more than 100,000 signatures by late February. Hung was brought back to American Idol as part of a mid-season special titled Uncut, Uncensored and Untalented, airing March 1, 2004. The special documented what it was like to experience the audition process and, in Hung's case, emerge as an inadvertent celebrity. Hung was crowned the Artichoke King of 2006 in Castroville, California's Artichoke Festival, an honor previously bestowed on Marilyn Monroe.[4]

William Hung was offered a $25,000 advance on a record deal from Koch Entertainment in 2004, and released three albums on that label in 2004 and 2005. His first album was titled Inspiration and was produced by Giuseppe D. It was recorded over a March 2004 weekend with Hung singing vocals over karaoke music. To promote it, Hung performed before nearly 20,000 fans during half-time at a Golden State Warriors game on April 6 and performed "She Bangs", included on the album, on such shows as The Tonight Show with Jay Leno. The album received highly negative reviews,[5][6][7] but ultimately went on to sell about 200,000 copies and reached Number One on Billboard's Top Independent Album Chart.[8][9] His two follow-up albums were far less successful, as Hung for the Holidays (a Christmas album) only sold 35,000 copies, despite a national promotion campaign including appearances on The Howard Stern Show, and Miracle: Happy Summer from William Hung (another karaoke cover album) only sold 7,000.[9] In a February 2006 interview, he said he was working on a 5 or 6-track fourth album,[10] though with his retirement in 2011, it is not likely such an album will ever be released.

Hung appeared in commercials for the search engine Ask.com, the Game Show Network (spoofing Freddie Mercury and singing an off-key "We Are the Champions"), as well as the mobile phone service provider Cingular Wireless.[citation needed] He also appeared to sing "Take Me Out to the Ballgame" in May 2004 at the Rogers Centre for the Toronto Blue Jays.[11]

His first movie, a low-budget Hong Kong period comedy called Where is Mama's Boy (2004), was released in January 2005. Hung played a good-natured village kid who sells Chinese pancakes to pay his mother's medical bills. His character gets discovered as a singer, and helps a woman protect her business from her jealous, conniving elder sister. In the film, Hung played opposite veteran Hong Kong actress Nancy Sit and parodied his own American Idol performance with the song "Siu Beng" (Cantonese) ("Chinese Pancake"), an allusion to his American Idol audition song, "She Bangs." Despite solid financial backing and the involvement of Nancy Sit, the film was a box office flop.

In 2011, Hung became a technical crime analyst for the Los Angeles County Sheriff's Department, and retired from music. Hung remains optimistic about his new career path, and states he does not regret that his music career has ended. "I showed that even the Average Joe could succeed," he remarked on his short-lived time as a pop star.[9]

Commentator Emil Guillermo claimed that Hung may not have gained as much attention had he been of another race, and his popularity may be derived from his being a representation of the Asian stereotype, characterized by nerdiness, bucked teeth, studiousness, speaking with a strong "fresh off the boat" accent, and lacking singing talent or rhythm. Documentary filmmaker James Hou commented, "As Asian Americans, we look through this racial lens, and we see this guy who embodies all the stereotypes we're trying to escape from."[13]

Some analysts have argued that Hung's career arose out of mockery, and that the media exploited him as a joke rather than as a talented or inspirational figure.[14] Ron Lin, former editor in chief of the UC Berkeley's Daily Californian asserts: "It's really difficult for Asian American males to break through and (Hung) may not be the most appealing example."[15]

Amber Eliza Watts suggested that Hung's cult following derived from him being the antithesis of everything Idol represented, with his lack of musical talent and odd looks, and how unlike other audition failures he was not arrogantly expecting to be made a pop star, he just wanted to sing.[16] In a 2008 American Idol extra, in response to the question, "Why do you think it is that people gravitate towards William Hung so much?", Hung stated, "I believe it's my attitude and charisma, I tell people constantly, media, everywhere I go, just never give up on your dream."

Hung's music video, She Bangs, has been viewed over 2 million times on YouTube.[23]