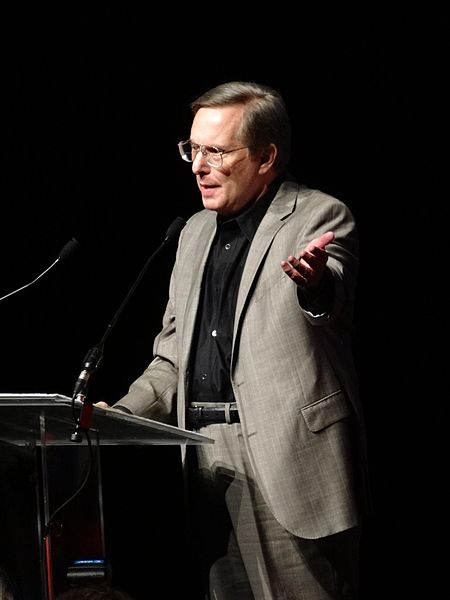 William Friedkin (/ˈfriːdkɪn/; born August 29, 1935)[2] is an American film and television director, producer and screenwriter closely identified with the "New Hollywood" movement of the 1970s.[3][4] Beginning his career in documentaries in the early 1960s, he is perhaps best known for directing The French Connection (1971) and The Exorcist (1973), the former of which won five Academy Awards, including Best Picture, Best Adapted Screenplay and Best Director. Some of his other films include the pioneering queer drama The Boys in the Band (1970), the international suspense thriller Sorcerer (1977), the highly controversial 1980 crime film Cruising (1980),[5][6] the action thriller To Live and Die in L.A. (1985), the psychological horror film Bug (2006), and the dark comedy Killer Joe (2011).

Friedkin was born in Chicago, Illinois, the son of Rachael (née Green) and Louis Friedkin. His father was a semi-professional softball player, merchant seaman, and men's clothing salesman. His mother, whom Friedkin called "a saint," was an operating room registered nurse.[2] His parents were Jewish emigrants from Ukraine.[7] His grandparents, parents, and other relatives fled Ukraine during a particularly violent anti-Jewish pogrom in 1903.[8] Friedkin's father was somewhat uninterested in making money, and the family was generally lower middle class while he was growing up.[2] According to film historian Peter Biskind, "Friedkin viewed his father with a mixture of affection and contempt for not making more of himself."[2] According to his memoir, The Friedkin Connection, Friedkin had the utmost affection for his father.

Friedkin attended public schools in Chicago. He enrolled at Senn High School, where he played basketball well enough to consider turning professional.[9] Friedkin was not a serious student and barely received grades good enough to graduate,[10] which he did at the age of 16.[11] According to Friedkin, this was because of social promotion and not because he was bright.[12]

Friedkin began going to movies as a teenager,[9] and has cited Citizen Kane as one of his key influences. Several sources claim that Friedkin saw this motion picture as a teenager,[13] but Friedkin himself says that he did not see the film until 1960, when he was 25 years old. Only then, Friedkin says, did he become a true cineaste.[14] Among the movies which he saw as a teenager and young adult were Les Diaboliques, The Wages of Fear, and Psycho (which he viewed repeatedly, like Citizen Kane). Televised documentaries, such as his Second City documentary A Tale of Two Cities, 1960's Harvest of Shame, also were important in his developing sense of cinema.[9]

He began working in the mail room at WGN-TV immediately after high school.[15] Within two years (at the age of 18),[16] he started his directorial career doing live television shows and documentaries.[17] His efforts included The People vs. Paul Crump (made with Bill Butler in 1962) which won an award at the San Francisco International Film Festival and contributed to the commutation of Crump's death sentence.[16][18] Its success helped Friedkin get a job with producer David L. Wolper.[16]

As mentioned in Friedkin's voice-over commentary on the DVD re-release of Alfred Hitchcock's Vertigo, Friedkin directed one of the last episodes of The Alfred Hitchcock Hour in 1965, called "Off Season".[19] Hitchcock admonished Friedkin for not wearing a tie while directing.[20]

In 1965, Friedkin moved to Hollywood and two years later released his first feature film, Good Times starring Sonny and Cher. 'Which I am telling you, is unwatchable.'[21] Several other "art" films followed, including the adaptation of Mart Crowley's The Boys in the Band and most notably The Birthday Party, based on an unpublished screenplay by Harold Pinter, which he adapted from his own play. Friedkin, however, did not want to be known as an art house director, but rather for action and serious drama through stories about an America upended by crime, hypocrisy, the occult, and amorality. All of which he mounted up into his films to reflect what was going on in an America that was changing in the wake of Vietnam, the Sexual Revolution, and Watergate.

In 1971, his The French Connection was released to wide critical acclaim. Shot in a gritty style more suited for documentaries than Hollywood features, the film won five Academy Awards, including Best Picture and Best Director.

Friedkin followed up with 1973's The Exorcist, based on William Peter Blatty's best-selling novel, which revolutionized the horror genre and is considered by some critics to be one of the greatest horror movies of all time.[citation needed] The Exorcist was nominated for 10 Academy Awards, including Best Picture and Best Director. It won the Best Screenplay and Best Sound.

Following these two pictures, Friedkin, along with Francis Ford Coppola and Peter Bogdanovich, was deemed one of the premier directors of New Hollywood; In 1973, the trio announced the formation of an independent production company at Paramount, The Directors Company. Whereas Coppola directed The Conversation and Bogdanovich, the Henry James adaptation, Daisy Miller, Friedkin abruptly left the company, which was soon closed by Paramount.[22] But Friedkin's later movies did not achieve the same success. Sorcerer (1977), a $22 million American remake of the French classic Wages of Fear, co-produced by both Universal and Paramount, starring Roy Scheider, was overshadowed by the blockbuster box-office success of Star Wars, which had been released exactly one week prior. Friedkin considers it his finest film, and was personally devastated by its financial and critical failure (as mentioned by Friedkin himself in the documentary series The Directors (1999)).

Sorcerer was shortly followed by the crime-comedy The Brink's Job (1978), based on the real-life Great Brink's Robbery in Boston, Massachusetts, which was also unsuccessful at the box-office. In 1980, he directed an adaptation of the Gerald Walker crime thriller Cruising, starring Al Pacino, which was protested against even during its making and remains the subject of heated debate. The film was critically assailed, and was a financial disappointment.[23]

Friedkin suffered a major heart attack on March 6, 1981. He had a genetically-caused defect in his circumflex left coronary artery, and nearly died. He spent months in rehabilitation.[24]

Throughout the 1980s and 1990s, Friedkin's films received mostly lackluster reviews and moderate ticket sales. Deal of the Century (1983), starring Chevy Chase, Gregory Hines and Sigourney Weaver, was sometimes regarded as a latter-day Dr. Strangelove, though it was generally savaged by critics. However, his action/crime movie To Live and Die in L.A. (1985), starring William Petersen and Willem Dafoe, was a critical favorite and drew comparisons to Friedkin's own The French Connection (particularly for its car-chase sequence), while his courtroom-drama/thriller Rampage (1987) received a fairly positive review from Roger Ebert despite major distribution problems. He next directed the horror film The Guardian (1990) and then the thriller Jade (1995), starring Linda Fiorentino; the latter film received a somewhat favorable response from critics and audiences. Friedkin even said that Jade was the favorite of all the films he had made,[25] as is Sorcerer.[26]

In 2000, The Exorcist was re-released in theaters with extra footage and grossed $40 million in the U.S. alone. Friedkin's involvement in 2007's Bug resulted from a positive experience watching the stage version in 2004. He was surprised to find that he was, metaphorically, on the same page as the playwright and felt that he could relate well to the story.[27] The film won the FIPRESCI prize at the Cannes Film Festival.

Later, Friedkin directed an episode of the TV series CSI: Crime Scene Investigation titled "Cockroaches," which re-teamed him with To Live and Die in L.A. star William Petersen. He directed again for CSI's 200th episode, "Mascara."

In June 2010, author William Peter Blatty, promoting his latest novel, revealed that Friedkin had committed to direct the feature film adaptation of his thriller, Dimiter.[28] This would mark almost forty years since their previous collaboration, The Exorcist, not counting the failed collaboration between the two on The Exorcist III. The idea for the book itself actually came to Blatty while sitting in Friedkin's office in 1972 during the first film's production, as he read an article concerning the then atheist-run state of Albania executing a priest for baptizing a newborn infant.[29] He had worked on it on and off ever since 1974, and, upon its completion, sat down with Friedkin for a one-on-one interview in The Huffington Post a few days after Blatty named Friedkin as attached to direct. According to the author, his friend and director had been eager to adapt the story.

In 2011, Friedkin directed Killer Joe, a black comedy written by Tracy Letts, and starring Matthew McConaughey, Emile Hirsch, Juno Temple, Gina Gershon, and Thomas Haden Church. Killer Joe premiered at the 68th Venice International Film Festival, prior to its North American debut at the 2011 Toronto International Film Festival. It opened in U.S. theaters in July 2012, to some favorable reviews from critics but did poorly at the box office, possibly because of its restrictive NC-17 rating.

In April 2013, Friedkin published a memoir, The Friedkin Connection.[30] He was presented with a lifetime achievement award at the 70th Venice International Film Festival in September.[31]

Friedkin has been to an array of unrealized projects over the years, ranging from The Ripper Diaries about the manhunt of Jack the Ripper. A film about the account of the Florence Maybrick murder trial. Battle Grease,[32] to an adaptation of the Frank De Felitta suspense novel Sea Trial.[33] A film about the murder of Gianni Versace and the killing spree of his murderer, Andrew Cunanan entitled, The Man Who Killed Versace which was written by Frederic Raphael and to be produced by Cruising producer Jerry Weintraub and was to star Sergio Castellitto as Versace and Freddie Prinze, Jr. as Cunanan. A horror thriller A Safe Darkness, the cop thriller Bump City and the UFO thriller The Devil's Triangle.[34] It was also reported that Friedkin is to direct an HBO movie about the life of the provocative entertainer, Mae West starring Bette Midler entitled Mae West in Sex as West based on her memoirs written by Harvey Fierstein.[35] Also, Friedkin is talks to directing Don Winslow's crime novel, The Winter of Frankie Machine.[36]

While he was filming The Boys in the Band in 1970, Friedkin began a relationship with Kitty Hawks, daughter of director Howard Hawks. It lasted two years, during which the couple announced their engagement, but the relationship ended about 1972.[46] Friedkin began a four-year relationship with Australian dancer and choreographer Jennifer Nairn-Smith in 1972. Although they announced an engagement twice, they never married. They did, however, have a son, Cedric, born on November 27, 1976.[47]

Friedkin and his second wife, Lesley-Anne Down, also had a son, Jack, born in 1983.[41] Friedkin was raised Jewish, but became an agnostic later in life.[48] However, during an appearance and Q&A at a 40th anniversary screening of The Exorcist at the 2013 Dallas International Film Festival, Friedkin revealed that he "believes strongly in God" and "the teachings of Jesus" and other religious figures, and that we are "in God's hands."[49]