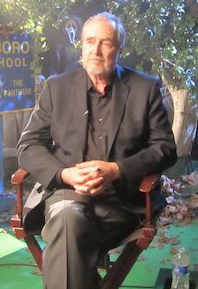 Wesley Earl Craven (August 2, 1939 - August 30, 2015) was an American film director, writer, producer, and actor. He was known for his pioneering work[1][2][3] in the genre of horror films, particularly slasher films, where his impact on the genre was considered prolific and influential.[4][5] Due to the success and cultural impact[6] of his works in the horror film genre, Craven has been called a "Master of Horror".[3][7][8][9][10]

He is best known for creating A Nightmare on Elm Street and Scream, featuring the characters of Freddy Krueger and Ghostface respectively. Some of his other films include The Last House on the Left, The Hills Have Eyes, Swamp Thing, The Serpent and the Rainbow, The People Under the Stairs, Vampire in Brooklyn, and Red Eye.

Craven was born in Cleveland, Ohio, the son of Caroline (née Miller) and Paul Eugene Craven.[11][12] He was raised in a strict Baptist family.[13] Craven earned an undergraduate degree in English and psychology from Wheaton College in Illinois and a master's degree in philosophy and writing from Johns Hopkins University.[14]

Craven briefly taught English at Westminster College and was a humanities professor at Clarkson College of Technology (later named Clarkson University) in Potsdam, New York.[15] He additionally taught at Madrid-Waddington High School in Madrid, New York.[16] During this time, he purchased a used 16 mm film camera and began making short movies. When his friend Tom Chapin informed him of a messenger position at a New York City post-production company run by his brother, future folk-rock star Harry Chapin, Craven moved to Manhattan.[16] His first creative job in the film industry was as a sound editor for Chapin's firm.[15]

Recalling his early training, Craven said in 1994, "Harry was a fantastic film editor and producer of industrials. He taught me the Chapin method : 'Nuts and bolts! Nuts and bolts! Get rid of the shit!'" Craven afterward became the firm's assistant manager, and broke into film editing with You've Got to Walk It Like You Talk It or You'll Lose That Beat (1971).[16]

Craven left the academic world for the more lucrative role of pornographic film director.[17] In the documentary Inside Deep Throat, Craven says on camera he made "many hardcore X-rated films" under pseudonyms. While his role in Deep Throat is undisclosed, most of his early known work involved writing, film editing, or both.[17] Craven's first feature film as director was The Last House on the Left, which was released in 1972.[15] Craven expected the film to be shown at only a few theaters, which according to him "gave me a freedom to be outrageous, and to go into areas that normally I wouldn't have gone into, and not worry about my family hearing about it, or being crushed."[18] Ultimately the movie was screened much more widely than he assumed leaving him ostracized due to the content of the film.[18]

After the negative experience of Last House, Craven attempted to move out of the horror genre, and began writing non horror films with his partner Sean S. Cunningham, none of which attracted any financial backing.[19] Finally, based on advice from a friend about the ease of filming in the Nevada deserts, Craven began to write a new horror film based on that locale.[19] The resulting film, The Hills Have Eyes, cemented Craven as a "horror film director" with Craven noting "It soon became clear that I wasn't going to do anything else unless it was scary,"[19]

Craven frequently collaborated with Sean S. Cunningham. In Craven's debut feature, The Last House on the Left, Cunningham served as producer. They pooled all of their resources and came up with $90,000.[citation needed] Later, in Craven's best-known film, A Nightmare on Elm Street (1984), Cunningham directed one of the chase scenes, although he was not credited.[15] Their characters, Freddy Krueger and Jason Voorhees, appeared together in the slasher film Freddy vs. Jason (2003) with Cunningham acting as producer, while screenwriter Victor Miller is credited as "Character Creator". Later, in The Last House on the Left remake (2009), Cunningham and Craven share production credits.[20]

Craven had a hand in launching actor Johnny Depp's career by casting him in A Nightmare on Elm Street, Depp's first major film role.[21]

Although known for directing horror/thriller films, he had worked on two films which are outside this genre: Music of the Heart (1999), and as one of the 22 directors responsible for Paris, je t'aime (2006).[17]

Craven created Coming of Rage, a five-issue comic book series, with 30 Days of Night writer Steve Niles.[22] The series was released in digital form in 2014 by Liquid Comics with a print edition scheduled for an October 2015 debut.[22]

Craven's works tend to share a common exploration of the nature of reality. A Nightmare on Elm Street, for example, dealt with the consequences of dreams in real life.[23] New Nightmare has actress Heather Langenkamp play herself as she is haunted by the villain of the film in which she once starred.[24] At one point in the film, the audience sees on Wes Craven's word processor a script he has written, which includes the conversation he just had with Heather—as if the script were being written as the action unfolds. The Serpent and the Rainbow portrays a man who cannot distinguish between nightmarish visions and reality.[24]

In Scream, the characters frequently reference horror films similar to their situations, and at one point, Billy Loomis tells his girlfriend that life is just a big movie. This concept was emphasized in the sequels, as copycat stalkers re-enact the events of a new film about the Woodsboro killings (Woodsboro being the fictional town where Scream is set) occurring in Scream.[15] Scream included a scene mentioning an urban legend about Richard Gere and a sex act involving a hamster.[25] Craven stated in interviews that he received calls from agents telling him that if he left that scene in, he would never work again.[26][27] The last film that he directed before his death was Scream 4.[17]

During his career, Wes Craven was nominated for and won several awards, including the Saturn Award.[28]

In 1977, he won the critic's award at the Sitges Film Festival for his film The Hills Have Eyes.[29] The Gérardmer Film Festival granted him the Grand Prize in 1997 for Scream.[30] In 2012, the New York City Horror Film Festival awarded Craven the Lifetime Achievement Award.[31]

Craven designed the Halloween 2008 logo for Google[32] and was the second celebrity personality to take over the YouTube homepage on Halloween.[33]

Craven had a letter published in the July 19, 1968, edition of Life, praising that periodical's coverage of contemporary rock music, in particular Frank Zappa's.[34]

Craven's first marriage, to Bonnie Broecker, produced two children: Jonathan Craven (born 1965) and Jessica Craven (born 1968). Jonathan is a writer and director.[15] Jessica was a singer-songwriter in the group the Chapin Sisters. The marriage ended in 1970. In 1982, Craven married a woman who became known professionally as actress Mimi Craven. The two later divorced, with Wes Craven stating in interviews that the marriage dissolved after he discovered it "was no longer anything but a sham".[35] In 2004, Craven married Iya Labunka; she frequently worked as a producer on Craven's films.[36]

Craven was an atheist, once telling FANGORIA magazine that "Formally, I don't believe in God" and that "I believe religions have done much more harm than they've done good." [38]

Many actors paid tribute to him, including David Arquette, Johnny Depp, Adrienne Barbeau, Angela Bassett, Courteney Cox, Scott Foley, Sarah Michelle Gellar, Kadeem Hardison, Jamie Kennedy, Heather Langenkamp, Rose McGowan, Cillian Murphy, Mitch Pileggi, Kristy Swanson and Amanda Wyss.[40][41][42][43][44][45] Depp stated, "Wes Craven was the guy who gave me my start, from my perspective, for almost no reason in particular. I read scenes with his daughter when I auditioned for the part. At the time, I was a musician. I wasn't really acting. It was not anything very near to my brain or my heart, which is pretty much how it remains to this day. But Wes Craven was brave enough to give me the gig based on his daughter's opinion, I guess she had read with a bunch of actors, and after the casting sessions, she said, 'No, that's the guy.' I always think of her for putting me in this mess, and certainly Wes Craven for being very brave to give me this gig. But he was a good man — so rest in peace, old Wes."[40] Robert Englund, one of Craven's most frequent acting collaborator said Craven was "a brilliant, kind, gentle and very funny man."[43] Neve Campbell, who starred in Scream's franchise, said, "We lost a great deal of magic yesterday. I'm devastated to hear of Wes's passing. My life wouldn't be what it is without him. I will be forever grateful for his brilliant direction, his wicked sense of humour and his consummate kindness and friendship. He has entertained us all for decades and inspired so many to follow in his path. I loved Wes dearly and will miss him always. Thank you Wes!!!".[44]

The 10th episode of Scream was dedicated in his memory.[46]

Report a problem
Biography of Wes Craven at FanPal • 2020