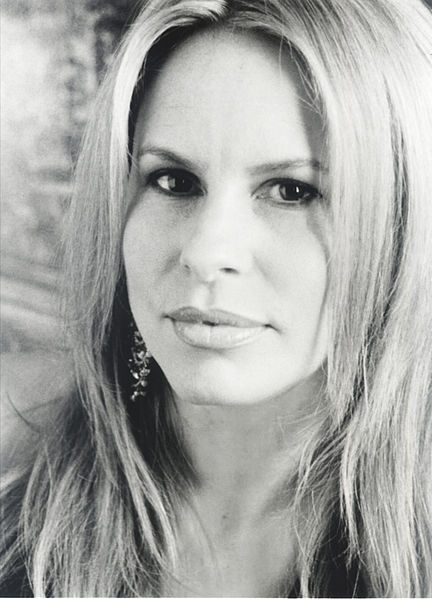 Vonda Shepard (born July 7, 1963) is an American singer, songwriter, and actress. She appeared as a regular in the television show Ally McBeal, as a resident performer in the bar where the show's characters drank after work. Her version of Kay Starr’s Christmas classic "(Everybody's Waitin' for) The Man with the Bag," after it was featured on a season 4 episode of Ally McBeal, became a popular holiday song.[1][2][3] She plays piano, bass, and guitar.

Vonda Shepard was born in New York City. Her family relocated to California when she was a child. She played piano from an early age. Her father is Richmond Shepard, a mime and improvisational actor. Vonda has three sisters.[4]

After performing as a backing singer for many years she was eventually given her own recording contract. Shepard's first chart appearance was in 1987, when she recorded a duet with Dan Hill entitled "Can't We Try." Before this, she had tried out for the part of Michael J. Fox's sister in Light of Day, but she lost the part to Joan Jett. She was also poised to sing on Peter Cetera's duet "The Next Time I Fall," but he picked Amy Grant instead. She released her first self-titled album in 1989, but with little fanfare. The album did yield one chart single, "Don't Cry Ilene," a middle-tempo piano-driven jazz-R&B flavored song dealing with the break-up of a relationship between a black woman and a white man, arising from adult peer pressure. The track is sung from the perspective of the woman's white female friend, who harbors a desire to have the man for herself, but keeps her distance out of respect for her friend. The song peaked at Number 17 on the Billboard Hot Adult Contemporary chart and stayed on the charts for 12 weeks.[5]

After her third album, Vonda was signed up to appear on Ally McBeal after the show's creator, former attorney David E. Kelley, spotted her. While on the show she recorded two full soundtrack albums and was featured on two other Ally McBeal compilations. The songs that Shepard recorded for the Ally McBeal soundtrack albums were mainly covers of old songs with lyrics that paralleled what was happening in the title character's life on-screen. However, "Searchin' My Soul," which became the album's biggest hit single after Kelley chose it for the show's titles theme, was an original selection jointly written and composed by Vonda and Paul Howard Gordon. Since her appearances in the show, Shepard has released two more studio albums and a live album.

Vonda married music producer Mitchell Froom in 2004; they had their first child in 2006. She is also the stepmother to Froom's daughter, Ruby, from his marriage to Suzanne Vega.

Vonda provided vocals for "I Need You," whose music had been composed by James Newton Howard, for the 2010 film Love & Other Drugs, which starred Jake Gyllenhaal and Anne Hathaway.[citation needed]