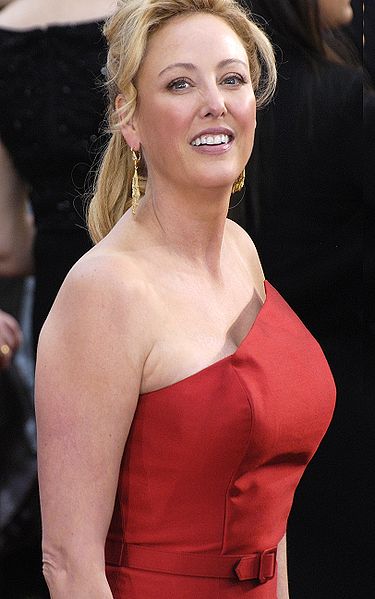 She starred as Kimble Hookstraten in the first season of the ABC political drama series Designated Survivor.[3]

Madsen was born in Chicago, Illinois, the daughter of Elaine Madsen (née Elaine Loretta Melson), who became an Emmy Award-winning filmmaker and author, and Calvin Madsen, a fireman.[4] After Madsen's parents divorced in the late 1960s, when the children were young, her mother left a career in finance to pursue a career in arts, encouraged by film critic Roger Ebert.[5] Madsen's siblings are Cheryl Madsen, an entrepreneur, and actor Michael Madsen. Her paternal grandparents were Danish, and her mother has English, Irish, Scottish, German and distant Native American ancestry.[6] Madsen is a graduate of New Trier High School in Winnetka, Illinois.[7]

Madsen later attended the Ted Liss Acting Studio in Chicago, and Harand Camp Adult Theater Seminar in Elkhart Lake, Wisconsin. Of her experience with Liss, she said: "I had wanted to join his class since I was 12. It was well worth the wait because I don't think I could have got that sort of training anywhere else especially in the United States... I always wanted to make a real career out of acting."[8]

Madsen made her film debut when she was 22, acting in a bit part she landed as Lisa in the teen sex comedy Class. She next appeared in Kenny Loggins' music video for "I'm Free (Heaven Helps the Man)" from the Footloose soundtrack.

Madsen at the 81st Academy Awards

Madsen first became popular with audiences in 1986 with her portrayal of a Catholic schoolgirl who fell in love with a boy from a prison camp in Duncan Gibbons' Fire with Fire. As beauty queen Dixie Lee Boxx, she was the sexy love interest of minor-league baseball manager Cecil "Stud" Cantrell (William Petersen) in the HBO television movie Long Gone (1987). Also in 1987, she appeared in the music video for "I Found Someone", by Cher. She played a secretary in the 1988 comedy film Hot to Trot. She also starred in the 1992 horror film Candyman.

Madsen appeared in a small role in the Francis Ford Coppola drama The Rainmaker (1997) starring Matt Damon. Film critic Roger Ebert said that Madsen had a "strong scene",[10] while reviewer James Berardinelli noted that "the supporting cast is solid, with turns from... Virginia Madsen as a witness for the plaintiff".[11] Madsen had a critically acclaimed performance as a supporting actress in Sideways (2004), directed by Alexander Payne. The role catapulted her onto the Hollywood A-list.[12]

Her first major role after Sideways was opposite Harrison Ford in Firewall. She later appeared in Robert Altman's A Prairie Home Companion, in a key role as the angel. She co-starred with Jim Carrey in The Number 23 and Billy Bob Thornton in The Astronaut Farmer; both films released in North America on February 23, 2007. She voiced Queen Hippolyte, mother of Wonder Woman, in the 2009 animated film Wonder Woman.

In 1988, Madsen appeared as Maddie Hayes' cousin in the final season of the ABC drama series Moonlighting. She has since made numerous television appearances, including Star Trek: Voyager, CSI: Miami, Dawson's Creek, The Practice, Frasier and other series. She was also co-host of the long-running television series Unsolved Mysteries in 1999, during the show's eleventh (also second and final) season on CBS. She starred opposite Ray Liotta in the short-lived CBS crime drama series Smith. She also had a recurring role in the final season of the USA Network comedy-drama series Monk.

In 2010, she landed the starring role of Cheryl West in the ABC drama series Scoundrels. In December 2010, it was announced that she would be joining the cast in the NBC science fiction/action series The Event.[13] In 2012, she joined the cast of the AMC western drama series Hell on Wheels as Mrs. Hannah Durant, first appearing in episode eight of season 2, "The Lord's Day". In 2013, Madsen began appearing on Lifetime's Witches of East End as Penelope Gardiner, the main villainess of the first season.

In 2008, she formed her own film production company called Title IX Productions.[14] Her first project was a film made with her mother titled I Know a Woman Like That. The film is a documentary about the lives of older women. On the creation of the film, she said her mother's active lifestyle was an inspiration to start filming.

My mother's level of activity, of productivity, was exactly why I thought a project like this would work. Originally, when we put the idea together, she had said, "I'm far too busy. I'm going to Holland, and then I'm going here and there and I'm writing my book." But that's really what it's about.[15]

Her second project is titled Fighting Gravity and is about the inability of female ski jumpers to obtain recognition in Olympic competition.[16]

Madsen was formerly married to actor and director Danny Huston after meeting on the set of Mr. North. They were married in 1989 and divorced in 1992.[17] Madsen was formerly in a long term relationship with Antonio Sabàto Jr., with whom she had one son, Jack Antonio (born 1994).[18]