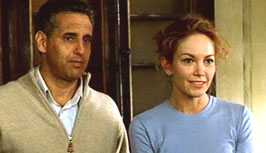 Vincent Riotta (born 14 of October 1960) is an English-born stage and film actor.

Riotta is of Italian descent. He studied at the Royal Academy of Dramatic Art. He went on to perform in various stage plays, such as Shakespeare's Romeo, which was held at the Young Vic, Tennessee Williams' A Streetcar Named Desire, held at the Leicester Haymarket. Also, the twin roles of The Corsican Brothers at the Abbey in Dublin, and the lead role of Fridays at Seven at the Court Theatre in West Hollywood.

Riotta's film credits include the independent mafia film Al Capone, for which he won the Best Actor award at the 1995 Barcelona Film Festival for his portrayal of the title character. In 2002, he played the lead role of Rico Morales in the drama Bella Bettien. He also holds many cameo appearances to his name in such high-profile films as Captain Corelli's Mandolin, starring Nicolas Cage and Penélope Cruz. However, universally he is probably best recognised as one of the lead male roles in the 2003 romantic-comedy Under The Tuscan Sun, starring Diane Lane and fellow Italian actor Raoul Bova. In the film, he plays Frances Mayes' (Diane Lane) first love interest upon arriving in Italy; a kind, well-reserved and married estate agent from whom she receives emotional support throughout the film. To the contrary, on the commentary of Under the Tuscan Sun, director Audrey Wells states that his character's persona was merely something he invented, as in reality he is boyishly energetic.

Because of his frequent roles of portraying Italian men, critics and viewers often mistake him for being from Italy, when in fact he was born and brought up in Britain to Italian immigrants. He is fluent in Sicilian. He is married to casting director Teresa Razzauti. They live in London with their daughter, Emma Riotta.

Report a problem
Write to Vincent Riotta at FanPal • 2020