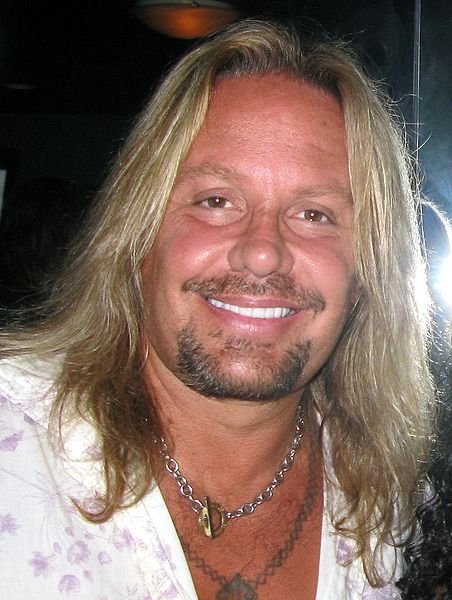 Neil was born in Hollywood, California to Shirley (née Ortiz) and Clois "Odie" Wharton. He has Mexican ancestry on his mother's side and Native American ancestry on his father's.[3] During the 1960s, his family moved around southern California from Inglewood to Watts, before finally settling in Glendora, attending Sunflower Intermediate School and later Royal Oak High School. As well as having an interest in music while a teenager, Neil was also interested in surfing, basketball, baseball, football and wrestling.
Read more...

Neil was discovered while performing with his band Rock Candy in 1979, and joined Mötley Crüe in 1980. Neil had been friends with Tommy Lee in high school. Mötley Crüe was looking for a lead vocalist at the time and were impressed by Neil after hearing him through Lee. Mötley Crüe released its first album, Too Fast for Love, in 1981.[4] The band then began a string of hit releases throughout the decade—1983's Shout at the Devil, which established the band as a big act in rock and roll, 1985's Theatre of Pain, 1987's hit Girls, Girls, Girls, and their highest-selling album, 1989's Dr. Feelgood—establishing the quartet as one of the biggest hard rock/metal bands of the '80s. Following the band's first compilation album Decade of Decadence 81-91 Mötley Crüe parted ways with Vince Neil in February 1992.

Exposed, was Neil's first solo album and was released in 1993. The album debuted at #13 on the Billboard charts.[5] The album featured Stevens, who subsequently played all bass and guitar tracks on "Exposed", Dave Marshall, Robbie Crane, and Vik Foxx. The band eventually went on tour, opening for Van Halen.

In September 1995, Neil released Carved in Stone, an industrial-oriented album produced by the Dust Brothers. The album was recorded and was put on hold while Neil was dealing with the illness of his daughter Skylar. The album charted at #139 on The Billboard 200.[6] The song "Skylar's Song" was released as a single for the album. The album sold fewer than 100,000 copies in the US, and Neil's contract with Warner Bros. Records eventually came to an end. The album was re-released in 2004.

Vince Neil on stage with Mötley Crüe in 2007

Vince Neil has toured his solo band, which consisted of Slaughter members Jeff Blando and Dana Strum, as well as drummer Zoltan Chaney.

The band came back into the spotlight after their Behind the Music episode aired on VH1 in December 1998 and became the highest rated in the series. A DVD was issued with ten extra minutes of footage in December 1999.

By 1997, Neil's solo career and Mötley's fortunes were declining, so the four reunited that year.[7] "They admitted they couldn't do it without me," he recalled, "and I wasn't selling records the way Mötley Crüe had."[8] They released Generation Swine, which debuted at #4 on the Billboard charts. Tension soon erupted, however, this time prompting Tommy Lee to leave. The other members replaced him with Randy Castillo and recorded New Tattoo in 2000. The renewed band went on hiatus when Castillo died from cancer in 2002.

Mötley's fortunes got a boost when Neil and Lee put aside their differences to tour in support of the 2005 compilation Red, White & Crüe. Dubbed Carnival of Sins, the tour featured acrobats, fire breathers and a midget as part of the overall circus atmosphere the band created.

Mötley Crüe released their most recent album, Saints of Los Angeles, in 2008, featuring all the original members.

Vince released his third solo album, Tattoos & Tequila, in 2010. It is Neil's first solo release in seven years, since the live album Live at the Whisky: One Night Only in 2003. The album is a soundtrack to the book Neil released in the same year, "Tattoos & Tequila: To Hell and Back with One of Rock's Most Notorious Frontmen". Each song on the album corresponds with a chapter in the book. The album titled track was released as a single for the album.

In a 2016 interview with Billboard, Neil revealed that he was scheduled to play at the presidential inauguration, but later stated that he was uninvited after Donald Trump's victory.[12]

In 1998, Mötley Crüe opened a store on Melrose Avenue in Los Angeles called, "S'Crüe", which stocks clothes from both Sixx and Neil's clothing lines (Outlaw and Bad Bones), along with CDs, the Mötley Brüe drink and other items. The store closed in January 1999, with the band deciding to sell the items online.

In 2006, Neil opened his own tattoo parlor called Vince Neil Ink. The shop is located on the Las Vegas Strip.

In 2005, Neil created the "Off The Strip Poker Tournament", which takes place in Las Vegas.

In 2007, Neil launched his own brand of tequila called Tres Rios. Neil debuted the tequila at the Food Network South Beach Wine & Food Festival in February 2007.

Mötley Crüe were on tour in the U.S. Crüe Fest. Mötley Crüe announced that they will play the entire Dr. Feelgood album every night of Crüe Fest 2 to celebrate the album's 20th anniversary.

Neil was the owner of the Las Vegas Outlaws of the Arena Football League,[19] but after 14 weeks of the season, the team was taken over by the league.

In 1989, Neil had a small role for Police Academy 6: City Under Siege, which showed him being protected by Lieutenant Moses Hightower (Bubba Smith). The scene was filmed, but didn't make the cut.[20]

In 1990, Neil had a small part in the film The Adventures of Ford Fairlane playing Bobby Black, lead vocalist of the fictional rock band that consisted of Carlos Cavazo, Randy Castillo, and Phil Soussan. Opening sequences of the film featured the band playing at Red Rocks Amphitheater, where Neil's character makes a grand entrance by swooping on stage via zip-line. He then proceeds to die onstage under suspicious circumstances. Black's misfortunes continue even in death when at his funeral a mêlée takes place resulting in his cylindrical plexiglass casket rolling down a hill (obviously containing a dummy of Neil).

In 2002, Neil was one of the cast members on the first season of The Surreal Life. In 2004, Neil appeared on the special Remaking Vince Neil, which showed him trying to recharge his solo career. He also recorded the single "Promise Me" produced by Desmond Child. The song was for sale on iTunes for a brief period, but a solo album never surfaced.

In 2004, Neil played a tattoo artist in an episode of the CBS sitcom Still Standing.

In 2009, Neil worked on a pilot for an A&E reality TV show. According to Neil, the program would follow him and his family after his parents moved in with him. As Neil told Eddie Trunk, "My wife hasn't talked to my mom since the wedding," which took place January 9, 2005, in Las Vegas.

In 2010, he was cast on ABC's Skating with the Stars as a celebrity contestant who skated with professional ice skater Jennifer Wester.[21]

In 2012, Neil participated in flight training in Henderson, Nevada for the PBS television series The Aviators, as reported by the Las Vegas Sun.[22]

In 2017, Neil was a cast member on The New Celebrity Apprentice until his elimination in task 7.[23]

In early 1993, he began dating actress and Playboy Playmate Heidi Mark after a blind date arranged by her makeup artist. The two were engaged within two months, and married in 2000. After just 15 months of marriage, and several attempts at reconciliation, they divorced in 2001.[26]

Neil married his fourth wife, Lia Gerardini, in January 2005. The ceremony was officiated by MC Hammer, an ordained minister and fellow cast member on The Surreal Life.[27] In 2010, Neil announced their separation.[28]

On August 15, 1995, Neil and Ruddell's daughter, Skylar Neil, died of cancer at the age of 4.[29][30] He founded the Skylar Neil Memorial Fund in her honor. Since that time, Neil and the foundation have raised awareness and funding for various children's illnesses. The Skylar Neil Memorial Foundation has donated millions of dollars to The T.J. Martell Foundation, and it sponsors an annual golf tournament to raise money for children with cancer.[31] In the summer of 2011 Neil hosted a series of benefits called Rockin' The Red Carpet that benefitted MUSIC for RELIEF as part of his tour with Mötley Crüe, Poison and the New York Dolls.[32][33][34][35][36][37] [38]

In late 1984, Finnish hard rock band Hanoi Rocks was on their second American tour and a first one ever to reach California. The two gigs meant to be held in Los Angeles sold out in twenty minutes. On the day they arrived in Los Angeles, December 8, Hanoi Rocks drummer Nicholas "Razzle" Dingley and the other members of the band (with the exception of singer Michael Monroe, who was recovering from a fractured ankle) visited Neil's home and spent the day at Redondo Beach. After partying for hours, Neil and Razzle decided to take a trip to a local liquor store in Neil's De Tomaso Pantera. Neil, who was drunk, lost control of the car and hit an oncoming vehicle. The two occupants of the other car were seriously injured and suffered brain damage,[39] and Dingley was killed. Neil was charged with vehicular manslaughter and driving under the influence of alcohol in connection with the crash. His blood alcohol level was 0.17, well above the California legal limit at that time of 0.10.[40] In July 1986, Los Angeles County Superior Court Judge Edward Hinz, Jr. sentenced Neil to 30 days in jail, five years probation, $2.6 million in restitution to the victims of the crash and 200 hours of community service. Neil got out of jail in 15 days for good behavior; Mötley Crüe dedicated their third studio album, Theatre of Pain, to Razzle.[41]

Neil was arrested in 2002 for punching record producer Michael Schuman to the ground in a nightclub parking lot. Neil was ordered to pay restitution and complete community service.[42]

In 2003, Neil was arrested again after accusations that he assaulted a sex worker at the Moonlight BunnyRanch by grabbing her around the throat and throwing her against a wall.[43] On April 9, 2004, Neil pleaded no contest to battery charges and he was sentenced to a 30-day jail suspension, 60 days anger management, and was fined $1,000 plus court fees of $132.[44]

On December 15, 2004, an arrest warrant for misdemeanor assault was issued for Neil after a fight during a show on October 30 where he left a soundman unconscious for 45 minutes.[45] Police had given the singer a criminal-trespass warning before he left the club and headed to Houston for a Halloween show.

In 2007, Neil was arrested for suspicion of DUI in Las Vegas after police spotted him making some erratic moves in his Ferrari. Neil later worked out a deal with prosecutors where he pleaded guilty to reckless driving in exchange for them to drop the DUI charge.[46]

In June 2010, Neil was arrested on suspicion of drunk driving in Las Vegas after having allegedly smashed a fan's camera[47] and was released on $2,000 bond.[48] On January 26, 2011, Neil plead guilty to drunk driving and was sentenced to 15 days in the Clark County jail and 15 days under house arrest.[49]

In March 2011, Neil was charged with battery and disorderly conduct after an altercation with ex-girlfriend, Alicia Jacobs.[50] On May 2, 2011, Neil's attorneys plead not guilty on his behalf during an arraignment and he was ordered to stay away from Jacobs then was scheduled to appear in court on August 8.[51] On August 8, 2011, Neil’s trial was rescheduled for November 7 due to an unexplained emergency.[52][53]

Neil pursued a part-time career in Motorsport via Indy Lights during the 1992 season with P.I.G. Racing. He started four races finishing three of them and all point scoring positions. Also that year he took part in the celebrity race at the Gold Coast Indycar event.[59] He has also been a participant in the Toyota Pro/Celebrity Race.