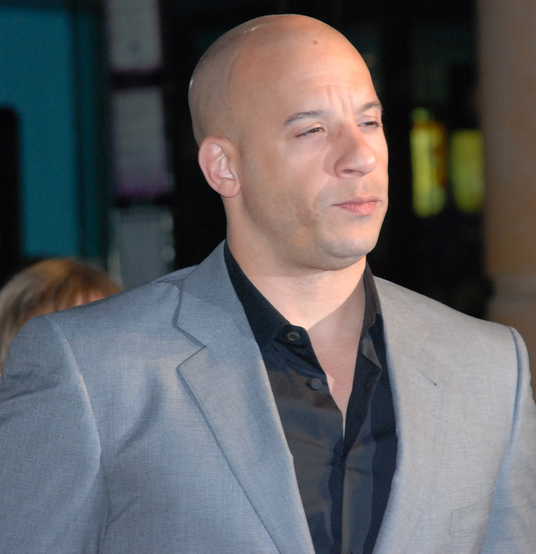 Diesel has also starred in the comedy The Pacifier (2005) and the crime drama Find Me Guilty (2006). His voice-acting work includes The Iron Giant (1999) and the video game spin-offs from the Chronicles of Riddick franchise, as well as Groot in the Marvel Studios films Guardians of the Galaxy (2014), Guardians of the Galaxy Vol. 2 (2017), and Avengers: Infinity War (2018). He wrote, directed, produced and starred in a short film titled Multi-Facial and the feature-length drama film Strays. He is the founder of the production companies One Race Films, Racetrack Records and Tigon Studios.

Diesel was born Mark Sinclair in Alameda County, California, with his twin brother, Paul.[2][3] His mother, Delora Sherleen (Sinclair) Vincent, is an astrologer.[4][5] Diesel has stated that he is "of ambiguous ethnicity".[6] His mother's background includes English, German, and Scottish.[7] He has never met his biological father, and has stated that "all I know from my mother is that I have connections to many different cultures".[8] Diesel has self-identified as "definitely a person of color",[9] and has stated that his parents' relationship would have been illegal in parts of the United States due to anti-miscegenation laws.[10] He was raised in New York City by his Caucasian mother and African-American stepfather, Irving H. Vincent, an acting instructor and theater manager.[3][9][11]

Diesel made his stage debut at age seven when he appeared in the children's play Dinosaur Door, written by Barbara Garson. The play was produced at Theater for the New City in New York's Greenwich Village. His involvement in the play came about when he, his brother and some friends had broken into the Theater for the New City space on Jane Street with the intent to vandalize it. They were confronted by the theater's artistic director, Crystal Field, who offered them roles in the upcoming show instead of calling the police.[12][13][14] Diesel remained involved with the theater throughout adolescence, going on to attend NYC's Hunter College, where studies in creative writing led him to begin screenwriting. He has identified himself as a "multi-faceted" actor[15] as a result of early difficulties finding roles due to his mixed heritage.[15][16]

Diesel at the premiere for Fast & Furious in 2009

Diesel's first film role was a brief uncredited appearance in the drama film Awakenings (1990). He then wrote, directed, produced, and starred in the short drama film Multi-Facial (1994), a semi-autobiographical film which follows a struggling multiracial actor stuck in the audition process. The film was selected for screening at the 1995 Cannes Festival. Diesel made his first feature-length film, Strays (1997), an urban drama in which he played a gang leader whose love for a woman inspires him to try to change his ways. Written, directed, and produced by Diesel, the film was selected for competition at the 1997 Sundance Festival, leading to an MTV deal to turn it into a series. He was then cast in Steven Spielberg's 1998 Oscar-winning film Saving Private Ryan on the poignancy of his performance in Multi-Facial.

In 1999, he provided the voice of the title character in the animated film The Iron Giant.[17]

Diesel had a major role in the drama thriller Boiler Room (2000). He got his breakthrough leading role as the anti-hero Riddick in the science-fiction film Pitch Black later that year. Diesel attained action hero stardom with two box office hits: the street racing action film The Fast and the Furious (2001), and the action thriller xXx (2002). In 2004, Diesel reprised his role as Riddick in The Chronicles of Riddick, which was a box office failure considering the large budget.[18] He also voiced the character in two spin-off video games. In a change from his previous action hero roles, in 2005, he played a lighthearted role in the comedy film The Pacifier, which became a box office success.[19]

In 2006, he chose a dramatic role playing real-life mobster Jack DiNorscio in Find Me Guilty. Although he received critical acclaim for his performance,[20] the film did poorly at the box office grossing only $2 million against a budget of $13 million.[21] Later that year, Diesel made a cameo appearance in The Fast and the Furious: Tokyo Drift, reprising his role from The Fast and the Furious.

In 2007, Diesel was set to produce and star as Agent 47 in the film adaptation of the video game Hitman, but eventually pulled back and served as executive producer on the film instead. In 2008, he starred in the science-fiction action thriller Babylon A.D. Diesel returned to The Fast and the Furious series, alongside all the actors from the original film, in Fast & Furious, which was released in April 2009.

Diesel reprised his role as Dominic Toretto in installments five through eight of The Fast and the Furious franchise, Fast Five (2011), Fast & Furious 6 (2013), Furious 7 (2015), and The Fate of the Furious (2017).[22][23] He reprised his role as Riddick in the third film of The Chronicles of Riddick series, simply titled Riddick (2013). In August 2013, Diesel received a star on the Hollywood Walk of Fame.[24] He voiced Groot in the 2014 Marvel Cinematic Universe film Guardians of the Galaxy.[25] He starred in the supernatural action film The Last Witch Hunter (2015).[26] In 2016, Diesel appeared as a supporting character in Ang Lee's war drama Billy Lynn's Long Halftime Walk.

Diesel also reprised his role of Groot once again in the 2018 film Avengers: Infinity War. He has said, " think there’s gonna be a moment that we’re all waiting for, and whether you know it or not, you are waiting to see and get down."[33]

Diesel is set to portray the Valiant Comics character Bloodshot in the film of the same name.[34] He is also set to appear in an updated film adaptation of the television series Kojak.[26]

Diesel is noted for his recognizably deep voice; he has said that his voice broke around age 15, giving him a mature-sounding voice on the telephone.[35]

Around 2001, he dated his Fast and the Furious co-star, Michelle Rodriguez.[36]

Diesel and his current partner, Mexican model Paloma Jimenez, have three children: daughter Hania Riley[37] (born April 2008),[38] son Vincent Sinclair (born 2010),[39] and daughter Pauline, whose arrival he announced in March 2015.[40] She is named in honor of his friend and Fast & Furious franchise co-star, Paul Walker, who died in November 2013.[41] He is also the godfather of Walker's daughter, Meadow Rain Walker. His daughter Hania studies Brazilian jiu-jitsu and judo.[42]

Diesel said in 2006 that he prefers to maintain his privacy regarding his personal life, stating: "I'm not gonna put it out there on a magazine cover like some other actors ... I come from the Harrison Ford, Marlon Brando, Robert De Niro, Al Pacino code of silence."[43] He has expressed his love for the Dominican Republic, and how he relates to its multicultural facets.[44] He is acquainted with its former president, Leonel Fernández, and appeared in one of Fernández's earlier campaign ads. Los Bandoleros, a short film directed by Diesel, was filmed in the Dominican Republic.[45]

Diesel has played Dungeons & Dragons for over 20 years,[46] and wrote the foreword for the commemorative book 30 Years of Adventure: A Celebration of Dungeons & Dragons. In the 30th anniversary issue of Dragon magazine, it was revealed that Diesel had a fake tattoo of his character's name, Melkor, on his stomach while filming xXx.[citation needed] Canadian video game designer and developer Merritt k created the 2015 Twine game (ASMR) Vin Diesel DMing a Game of D&D Just For You based on his D&D fandom.[47][48][49][50]