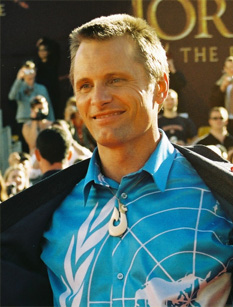 Mortensen received international attention in the early 2000s with his role as Aragorn in the epic film trilogy The Lord of the Rings. In 2005, Mortensen won critical acclaim for David Cronenberg's crime thriller A History of Violence.[2] Two years later, another Cronenberg film, Eastern Promises (2007), earned him further critical acclaim and a nomination for the Academy Award for Best Actor. A third teaming with Cronenberg in A Dangerous Method (2011) resulted in a nomination for the Golden Globe Award for Best Supporting Actor - Motion Picture. Other well-received films have included Appaloosa (2008) and Far from Men (2014). He received a second Best Actor nomination in 2017 at the 89th Academy Awards for his role in Captain Fantastic.[3]

Aside from acting, Mortensen's other artistic pursuits include fine arts, photography, poetry, and music. In 2002, he founded the Perceval Press to publish the works of little-known artists and authors.

Mortensen was born in New York City on October 20, 1958, the son of Grace Gamble (née Atkinson; July 8, 1928 - April 25, 2015) and Viggo Peter Mortensen Sr. (May 8, 1929 - March 2, 2017). His mother was American, while his father was Danish; they met in Norway.[4] His maternal grandfather was a Canadian from Nova Scotia,[5] and his maternal grandmother's family was from New England.[6][not in citation given] The family moved to Venezuela, then Denmark, and eventually settled in Argentina in the provinces of Córdoba, Chaco, and Buenos Aires, where Mortensen attended primary school and acquired a fluent proficiency in Spanish while his father managed poultry farms and ranches.[7] He was baptized Lutheran.[8]

When Mortensen was 11, his parents divorced and he and his mother returned to New York, where he spent the rest of his childhood, graduating from Watertown High School in Watertown in 1976.[9][10] He then attended St. Lawrence University in Canton, earning a bachelor's degree in Spanish Studies and Politics in 1980. Upon graduating, he lived in England and Spain, then moved back to Denmark, where he took various jobs such as driving trucks in Esbjerg and selling flowers in Copenhagen.[11][12] He eventually returned to the United States to pursue an acting career.[13]

Mortensen made his first film appearance playing an Amish farmer in Peter Weir's Witness (Mortensen had actually acted in at least one prior film, The Purple Rose of Cairo, but his scenes were deleted from the final cuts). Also in 1985, he was cast in the role of Bragg on Search for Tomorrow. Mortensen's 1987 performance in Bent at the Coast Playhouse, Los Angeles, won him a Dramalogue Critics' Award. Coincidentally, the play, about homosexual concentration camp prisoners, was originally brought to prominence by Ian McKellen, with whom Mortensen later costarred in The Lord of the Rings. In 1987, Mortensen guest starred as a police detective on the hit series Miami Vice.

Mortensen at the premiere of The Lord of the Rings: The Return of the King, December 1, 2003.

Another major mainstream breakthrough came in 1999, when Peter Jackson cast him as Aragorn in The Lord of the Rings film trilogy. According to the Special Extended Edition DVD of The Lord of the Rings: The Fellowship of the Ring, Mortensen was a last-minute replacement for Stuart Townsend, and would not have taken the part of Aragorn had it not been for his son's enthusiasm for the J. R. R. Tolkien novel. In The Two Towers DVD extras, the film's swordmaster, Bob Anderson, described Mortensen as "the best swordsman I've ever trained." Mortensen often performed his own stunts, and even the injuries he sustained during several of them did not dampen his enthusiasm. At one point during shooting of The Two Towers, Mortensen, Orlando Bloom, and Brett Beattie (scale double for John Rhys-Davies) all had painful injuries, and during a shoot of them, running in the mountains, Peter Jackson jokingly referred to the three as "the walking wounded." Also, according to the Special Extended Edition DVD of The Lord of the Rings: The Return of the King, Mortensen purchased the two horses, Uraeus and Kenny, whom he rode and bonded with over the duration of the films. He received critical acclaim for his portrayal of Aragorn, and was ranked No. 15 on a 2015 survey of "The 100 Greatest Movie Characters" conducted by Empire.[15]

In 2004, Mortensen starred as Frank Hopkins in Hidalgo, the story of an ex-army courier who travels to Arabia to compete with his horse, Hidalgo, in a dangerous desert race for a contest prize.

In 2005, Mortensen starred in David Cronenberg's movie A History of Violence as a family man revealed to have had an unsavory previous career. He was nominated for a Satellite Award for Outstanding Actor in a Motion Picture for this role. In the DVD extras for A History of Violence, Cronenberg related that Mortensen is the only actor he had come across who would come back from weekends with his family with items he had bought to use as props on the set.

Interviewed by eTalk Daily at the 2005 Toronto International Film Festival, for A History of Violence

In 2006, he starred as Captain Diego Alatriste in the Spanish language film Alatriste, based on the series of novels The Adventures of Captain Alatriste, written by the Spanish writer Arturo Pérez-Reverte.

In September 2007, the film Eastern Promises, directed by David Cronenberg, was released to critical acclaim for the film itself and for Mortensen's performance as a Russian gangster on the rise in London. His nude fight scene in a steam room was applauded by Roger Ebert: "Years from now, it will be referred to as a benchmark."[16] Mortensen's performance in Eastern Promises resulted in his winning the Best Performance by an Actor in a British Independent Film award from the British Independent Film Awards.[17] He was also nominated for an Academy Award for Best Actor.[18]

In 2009, Mortensen performed in The People Speak, a documentary feature film that uses dramatic and musical performances of the letters, diaries, and speeches of everyday Americans, based on historian Howard Zinn's A People's History of the United States.

While it was reported in April 2009 that Mortensen had, at least temporarily, retired from film acting,[19] Mortensen said he was misquoted. In a 2012 interview, he denied that he ever said he was retiring, only that he didn't have "plans to do another movie" at the time and that he was "taking a little break now. I don't have anything lined up."[20]

In 2009 he joined the cast of The Road, a film adaptation of the Cormac McCarthy novel of the same name,[21] and collaborated with David Cronenberg for a third time on A Dangerous Method.[22]

After two years, Mortensen returned to theatre in 2011, starring in Ariel Dorfman's Purgatorio in Madrid.[23]

Mortensen starred in the 2016 film Captain Fantastic, for which he received his second Academy Award nomination.

With part of his earnings from The Lord of the Rings, Mortensen founded the Perceval Press publishing house—named after the knight from the legend of King Arthur—to help other artists by publishing works that might not find a home in more traditional publishing venues.[24]

Perceval Press is also the home of Mortensen's many personal artistic projects in the area of fine arts, photography, poetry, song, and literature (see below).

Mortensen is also an author, with various books of poetry, photography, and painting published. His bibliography includes:

Mortensen is a painter and photographer. His paintings are frequently abstract and often contain fragments of his poetry therein. His paintings have been featured in galleries worldwide, and many of the paintings of the artist he portrayed in A Perfect Murder are his own.

Mortensen experiments with his poetry and music by mixing the two art forms. He has collaborated with guitarist Buckethead on several albums, mostly released on his own label (Perceval Press) or TDRS Music. Viggo was first introduced to Buckethead's work while working on sounds for an educational CD on Greek mythology. The finished product included a guitar part by Buckethead, which caught Viggo's ear and led him to initiate contact with the guitarist. The collaboration grew from there.[25]

Mortensen is featured on The Lord of the Rings: The Return of the King soundtrack, singing "Aragorn's Coronation" (the name of the extended version of this song in the 3rd original sound track is "The Return of the King"), the words by Tolkien and the music composed by Mortensen. In the extended DVD edition of the first Lord of the Rings movie, The Fellowship of the Ring, he sings the song "The Lay of Beren and Lúthien". His poems are written in English, Danish, and Spanish.

Following his appearance in the Lord of the Rings trilogy, in 2006 he was granted an honorary doctorate by his alma mater, St. Lawrence University.[5][26]

On October 13, 2006, he was awarded the Gold Medal of the Province and the City of León, Spain.

In 2017 he received his second Best Actor nomination in the 89th Academy Awards for his role in Captain Fantastic.[3]

Mortensen holds dual American and Danish citizenship.[1] He speaks fluent Danish, English, French and Spanish; he is also conversational in Italian, and understands Norwegian and Swedish. He has stated that he was raised speaking English and Spanish, and sometimes feels more comfortable expressing himself in Spanish.[28] He also has some knowledge of Catalan; twice, when receiving a prize in Catalonia, he made a short speech in Catalan.

Mortensen met actress and singer Exene Cervenka in 1986 on the set of the comedy Salvation! The couple married on July 8, 1987. On January 28, 1988, Cervenka gave birth to a son named Henry Blake Mortensen. Mortensen and Cervenka lived in Idaho for three years.[29] They separated in 1992 and divorced in 1997.[30] Since 2009, he has been in a relationship with Spanish actress Ariadna Gil and currently lives in Spain with her.

Mortensen has expressed a liking of association football, ice hockey and baseball. His favorite soccer players are Diego Maradona and Héctor "Bambino" Veira, and his favorite teams include Argentine club San Lorenzo de Almagro,[31] English team Fulham FC, Turkish side Beşiktaş[32] and both the Argentine and Danish national teams. He is a fan of the Montreal Canadiens and wore a Canadiens shirt underneath his costume throughout the filming of the Lord of the Rings trilogy.[33] During the 100th anniversary celebrations of the Montreal Canadiens, Mortensen introduced one of his idols, Guy Lafleur, to the crowd at the Bell Centre in Montreal.[34] He is also a fan of the New York Mets and, in an interview promoting 2009 film The Road, was seen wearing apparel indicating his support of the Australian Football League's Collingwood Magpies.[35] While appearing on the Late Show with David Letterman, he held a sign supporting the New York Giants.

Mortensen was a good friend of Icelandic painter Georg Guðni Hauksson until the latter's death in 2011. He had long been an admirer of Georg Guðni's work as a landscape artist, and the two published books together as well as maintaining a close friendship.[36] He was one of the signees of the "Toronto Declaration" protesting against spotlighting Tel-Aviv at the Toronto International Film Festival in 2009. Mortensen has owned property in Sandpoint, Idaho, and spends time there when not filming movies.[37]

Mortensen first endorsed Senator Bernie Sanders for President in the 2016 U.S. presidential election.[38] When Sanders lost the nomination, he endorsed Green Party candidate Jill Stein.[39] He wrote an open letter just before Election Day 2016 where he listed the reasons he disagreed with Hillary Clinton and could not support her in the race against Donald Trump, though he also thought that Clinton would be elected president in the end. He went on to narrate a viral documentary, The Revolution Televised, about the 2016 presidential election and the protests in the aftermath of the Democratic National Convention.[citation needed]

With anthropologists Federico Bossert and Diego Villar, Mortensen has written several works related to ethnography of natives in South America,[41] specifically in Argentina, Brazil, Paraguay, and Uruguay. Some of the published books co-authored by Mortensen are Sons of the Forest and Skovbo.