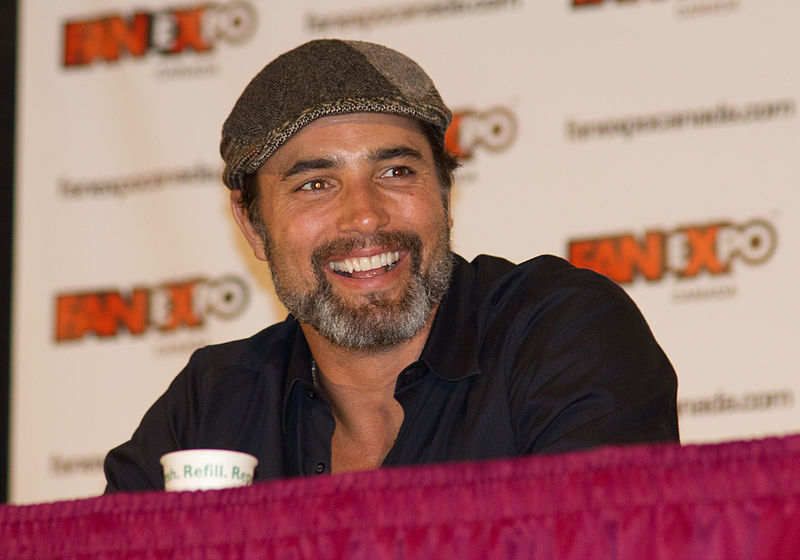 Victor Webster (born February 7, 1973) is a Canadian actor. He is known for being the second actor to play Nicholas Alamain on the NBC daytime soap Days of Our Lives from 1999-2000, the mutant Brennan Mulwray in Mutant X, Coop the cupid on Charmed and detective Carlos Fonnegra in Continuum.

Victor Webster was born in Calgary, Alberta, the son of Roswitha, a hair stylist, and John ("Jack") Webster, a police officer.[1] As a teenager, his behavior often got him into trouble. To find a more productive outlet, he started studying martial arts and eventually became a teacher of this, earning an undefeated record as an amateur kickboxer and a heavyweight black belt. Meanwhile, his early interest in acting was demonstrated in his involvement with numerous school plays and theater classes.[citation needed]
Read more...

Webster worked as a stockbroker and in import/export.[citation needed] He appeared in Cosmopolitan magazine's "All About Men" 1998 special issue. He began to pursue acting opportunities in the late 1990s. In 1999 he landed a part on the NBC daytime soap opera, Days of Our Lives. After leaving Days, he was cast as one of the leads in the nationally syndicated SF-action series Mutant X (2001), which ran for three seasons. In 2002, he was listed as one of People magazine's "50 Most Eligible Bachelors".

Webster appeared in the film Bringing Down the House and made guest appearances on other TV shows, including a 2003 role on HBO's Sex and the City, while working on Mutant X. Since Mutant X, Webster has continued to alternate between television and theatrical film roles. In 2006 he appeared in the final episodes of Charmed, portraying Coop, a cupid who married Phoebe Halliwell (played by Alyssa Milano) in the final episode of the series.

In 2009, Webster had a recurring role as Caleb Brewer on the Melrose Place relaunch. He appeared on the season 5 episode "Parasite" of Criminal Minds playing a con artist-turned-serial killer. He also guest-starred in the 2009 murder mystery Harper's Island. He had a small role in the 2010 Tyler Perry film Why Did I Get Married Too. In 2011, he had a recurring role on Castle as Kate Beckett's boyfriend, Josh Davidson. In the 2013 remake of Embrace of the Vampire, he played the lead male vampire Stefan. On Girlfriends' Guide to Divorce, he played Carl, a gigolo. In the 2016 Hallmark original movie Summer Villa, he's a chef.[2]