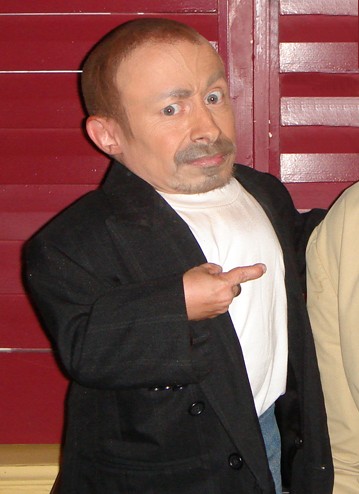 Verne Jay Troyer (January 1, 1969 - April 21, 2018) was an American actor, comedian, and stunt performer best known for playing Mini-Me in the Austin Powers film series. He was notable for having been only 2 ft 8 in (81 cm) tall, the result of cartilage-hair hypoplasia;[1][2] this made him one of the shortest men in the world.

Troyer was born in Sturgis, Michigan, the son of Susan, a factory worker, and Reuben Troyer, a repair technician.[3] He had two siblings, Davon and Deborah. He stated that his parents "never treated me any different than my other average-sized siblings. I used to have to carry wood, feed the cows and pigs and farm animals".[4] Troyer was initially raised Amish, but his parents left the faith when he was a child.[5] During his childhood, Troyer spent much time visiting Amish relatives[6] in Centreville, Michigan. He graduated from Centreville High School in 1987, and a plaque was dedicated to him in 2003.[7]

Troyer's film career began when a former president of Little People of America contacted him, looking for someone of a "certain size" to serve as a stunt double for the infant character "Baby Bink" in John Hughes' film Baby's Day Out (1994).[8] He gained further work as a stunt double with some minor comedic roles in several films of the 1990s, including Dunston Checks In, Jingle All the Way (both 1996), Men in Black (1997),[9] and My Giant (1998).[10]

Troyer first met with Jay Roach to discuss portraying Mini-Me in the Austin Powers series,[11] directed by Roach and starring co-creator Mike Myers, before filming for the series' second film began. Myers was impressed with Troyer's performance, rewriting the script for Austin Powers: The Spy Who Shagged Me (1999) to give Mini-Me more screen time and remove the character's death.[12] Troyer reprised the role three years later in Austin Powers in Goldmember (2002), and collaborated again with Myers on The Love Guru (2008).[9]

After reaching a large audience as Mini-Me, Troyer portrayed the goblin Griphook in Harry Potter and the Philosopher's Stone (2001),[13][14] and played the role of Percy in Terry Gilliam's fantasy film The Imaginarium of Doctor Parnassus (2009).[15] He also made several appearances as himself in reality television series, including The Surreal Life (2005), Welcome to Sweden (2007),[9] and the sixth series of the British Celebrity Big Brother (2009).[16]

He reportedly married model Genevieve Gallen on February 22, 2004,[citation needed] but filed for an annulment the next day. Although the couple's engagement was much reported, Troyer and his attorney denied that the pair ever had any formal wedding plans, saying that Gallen had fabricated the story for her own financial gain.[17][better source needed]

On June 25, 2008, a private home video was leaked of Troyer and his former live-in girlfriend, Ranae Shrider, having sex. The video, filmed in 2008 in Beverly Hills, California, and Shrider's hometown of Fort Cobb, Oklahoma,[18] was leaked to the public by Shrider and TMZ.[19] Kevin Blatt, the man responsible for brokering the deal for Paris Hilton's sex tape in 2003, tried to sell the video. Troyer, through his long-time attorney, Ed McPherson, sued TMZ, Blatt, and online rental company SugarDVD, for invasion of privacy and copyright infringement.[20]

In May 2015, Troyer, his girlfriend Brittney Powell, and her son Tyson appeared on Celebrity Wife Swap, where she switched places with Hines Ward's wife.[21]

In early April 2018, Troyer was admitted to a hospital after an incident in his home.[22][23] He had previously been admitted to rehab to undergo treatment for alcoholism.[23][24]

On April 21, 2018, Troyer died at the age of 49. No cause was immediately released.[25][26][27] His death was reported as a possible suicide to the coroner, who found very high alcohol levels in his body, suggesting and later confirming alcohol poisoning as the cause.[28][29] His death was later ruled a suicide.[30]

Report a problem
Biography of Verne Troyer at FanPal • 2021