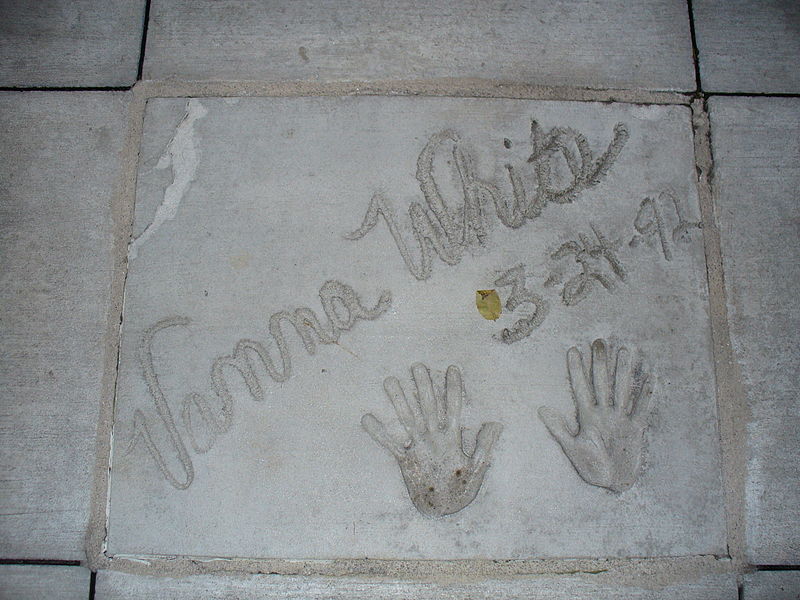 Vanna White (born Vanna Marie Rosich[1]; February 18, 1957) is an American television personality and film actress known as the hostess of Wheel of Fortune since 1982.

White was born Vanna Marie Rosich, in Conway, South Carolina,[3] the daughter of Joan Marie and Miguel Angel Rosich.[4] Her parents divorced when she was an infant,[1] and White took the name of her stepfather, Herbert Stackley White Jr., a former real estate broker in what is now North Myrtle Beach, South Carolina.[5]
Read more...

Before her appearance on TV in 1980, White was a contestant in the Miss Georgia 1978 pageant. White's first appearance in a game show was on the June 20, 1980, episode of The Price Is Right, in which she was among the first four contestants. She did not make it onstage, but the clip of her running to Contestants' Row was rebroadcast as part of The Price Is Right 25th Anniversary Special in August 1996 and also was featured on the special broadcast Game Show Moments Gone Bananas. After Wheel of Fortune hostess Susan Stafford left in October 1982, White was selected as one of three substitute hostesses (along with Vicki McCarty and Summer Bartholomew) to co-host the show. On December 13, 1982, White became the regular hostess. Her 1987 autobiography, Vanna Speaks!, was a best-seller.[6] Also in 1987, she was featured in a Playboy pictorial, showing photos taken of her by her boyfriend (before her career on Wheel of Fortune) wearing see-through lingerie.

In 1988, she appeared in the NBC television film Goddess of Love, in which she played Venus; Betsy Palmer co-starred as Juno. The film was panned universally by critics, with TV Guide joking that White's acting was "wheely" bad. Film historian Leonard Maltin added that the picture was "bottom-of-the-barrel yet, on its own terms, a must-see".[citation needed]

She has made cameo appearances on television shows such as L.A. Law, 227, Super Mario Bros. Super Show, Simon and Simon, The King of Queens, and Full House; and in films such as Naked Gun 33⅓: The Final Insult (1994) and Double Dragon (1994). She also appeared as Doris in the horror movie Graduation Day in 1981. It is an American slasher film directed by Herb Freed and produced by Troma Entertainment.

She guest-starred on Married...With Children; in a gender-bending parody of the film Indecent Proposal, White had the Robert Redford role while Al Bundy had that of Demi Moore. She served as guest timekeeper for WrestleMania IV. In 1992, the Guinness Book of World Records recognized White as "television's most frequent clapper". In 1996, she was the main narrator and singer in the CD release of Leslie Bricusse's "Santa's Last Ride".

On April 20, 2006, she was honored with a star on the Hollywood Walk of Fame, with Pat Sajak, Merv Griffin, and Alex Trebek as key witnesses.

White dated Playgirl centerfold/Chippendales-dancer-turned-actor John Gibson in the 1980s, and they eventually became engaged. In 1986, Gibson was killed in a plane crash. White married restaurant owner George Santo Pietro in December 1990.[8] White first became pregnant in September 1992, and announced her pregnancy on an episode of Wheel of Fortune where "Vanna's pregnant" was the answer to a puzzle. She miscarried shortly after the episode's taping.[9] White later had a son, Nicholas, born in 1994[10] and a daughter, Giovanna (Gigi), born in 1997,[11] from her marriage to Santo Pietro. The couple divorced in November 2002.

From 2004 to 2006, she was engaged to businessman Michael Kaye, senior partner in a large leveraged buyout fund based in southern California. The two never wed.[12]

White is a crochet and knitting enthusiast and has a line of yarns called "Vanna's Choice" through Lion Brand Yarns.[13]

In 1993, White sued the Samsung Electronics corporation over its use of a humorous ad featuring a robot turning letters on a game show, alleging a violation of her personality rights. The lower court's decision in Samsung's favor was reversed by the United States Court of Appeals for the Ninth Circuit,[14] and the Ninth Circuit denied a rehearing; Judge Kozinski issued a dissent.[14] The U.S. Supreme Court denied certiorari.[14] White ultimately was awarded $403,000 in damages.