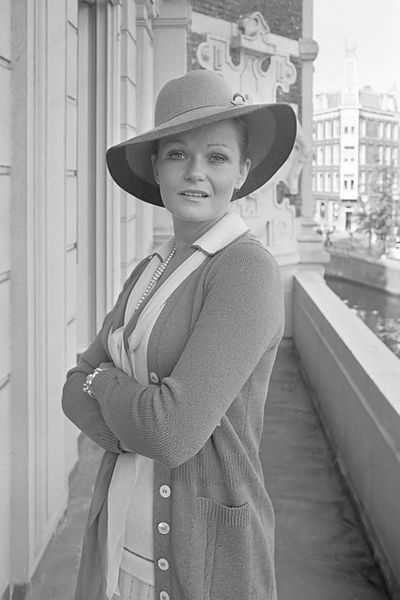 Valerie Ritchie Perrine (born September 3, 1943) is a retired American actress and model. For her role as Honey Bruce in the 1974 film Lenny, she won the BAFTA Award for Most Promising Newcomer to Leading Film Roles, the Cannes Film Festival Award for Best Actress, and was nominated for the Academy Award for Best Actress. Her other film appearances include Superman (1978), The Electric Horseman (1979), and Superman II (1980).

Perrine began her career as a Las Vegas showgirl. She played soft-core pornography actress Montana Wildhack in Kurt Vonnegut's Slaughterhouse-Five (1972). Perrine was photographed for a pictorial layout in the May 1972 issue of Playboy, later appearing on the cover in August 1981. She then became the first actress to purposely display herself nude on American television by completely baring her breasts during the May 4, 1973, PBS broadcast of Bruce Jay Friedman's Steambath on Hollywood Television Theater. (She was seen taking a shower from the side totally undressed.) Only a few PBS stations nationwide carried the program. Later in 1973, she appeared in the episode "When the Girls Came Out to Play" of the romantic anthology television series Love Story (1973).

In 1975, Perrine was nominated for the Academy Award for Best Actress and the Golden Globe for Best Motion Picture Actress (Drama) and won the Best Actress Award at the Cannes Film Festival for her role as comedian Lenny Bruce's wife, stripper Honey Bruce, in Bob Fosse's Lenny (1974).

She was Carlotta Monti in the biopic W.C. Fields and Me (1976). She played Miss Eve Teschmacher, moll of criminal mastermind Lex Luthor, in Superman (1978). For this role, she was nominated for the 1979 Saturn Award for Best Supporting Actress. She reprised her role as Miss Teschmacher in Superman II (1980).

Perrine played Charlotta Steele, ex-wife of a rodeo champion played by Robert Redford, in The Electric Horseman (1979). Her career grew uneven after an appearance in Can't Stop the Music (1980), for which she was nominated for a Razzie Award for Worst Actress. This film has since become a cult classic. In 1982, she played the role of Marcy, the wife of a corrupt police officer, in The Border with Jack Nicholson. In the years since then, Perrine has worked in lower-profile projects, although she did have a small supporting role in the 2000 Mel Gibson film What Women Want. In 1995, Perrine made a guest appearance on the series Homicide: Life on the Street, playing an ex-wife of Richard Belzer's Detective John Munch.

Perrine was born in Galveston, Texas, the daughter of Winifred "Renee" (née McGinley), a dancer who appeared in Earl Carroll's Vanities, and Kenneth Perrine, a Lieutenant Colonel in the U.S. Army.[1] Her mother was Scottish (of Irish descent), from Helensburgh in Dunbartonshire.[2] Owing to her father's career, Perrine lived in many locations as the family moved to different posts.