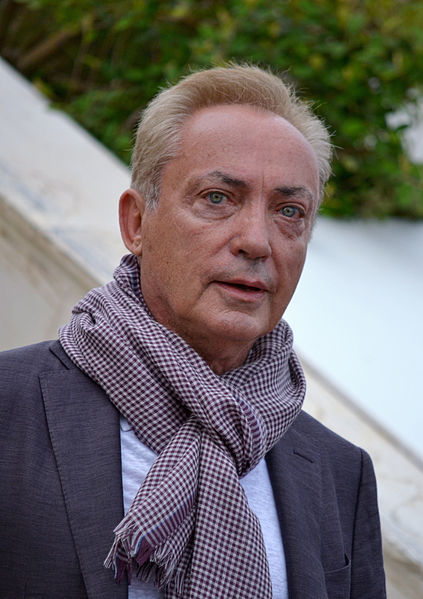 Kier was born in Cologne, near the end of World War II. The hospital where he was born was bombed moments after his birth.[3] In his youth he worked as an altar boy[4] and cantor. He moved to the United Kingdom to learn the English language.[1]
Read more...

Udo Kier at the press conference of Don't Worry, He Won't Get Far on Foot at Berlinale 2018

In 1966, Kier was cast in the lead role for the film Road to St. Tropez.[5][6] An early starring role in Andy Warhol's Frankenstein (1973) led to a string of art-house, low-budget, and mainstream horror films, including a number of vampire-themed pictures Die Einsteiger (1985), Blade (1998), Modern Vampires (1998), Shadow of the Vampire (2000), Dracula 3000 and Bloodrayne (2005). He has also become notorious for his work with cult directors, including Rainer Werner Fassbinder, Walerian Borowczyk, Gus Van Sant, Christoph Schlingensief, and Dario Argento (whose classic Suspiria (1977) he was featured in). He has appeared in all of Lars von Trier's movies since 1987's Epidemic (with the exceptions of The Idiots, The Boss of it All and Antichrist).

His most famous Hollywood roles include his appearance as Ron Camp in Ace Ventura: Pet Detective (1994),[7] Curly in Barb Wire, as a NASA flight psychologist in Armageddon,[8][9] and as Ralfi in the film Johnny Mnemonic. His music video work includes Madonna's "Deeper and Deeper" from the album Erotica,[10] Korn's "Make Me Bad", Eve's "Let Me Blow Ya Mind", and "Die Schöne und das Biest" by defunct German band Rauhfaser.

He has also worked extensively as a voice actor, starring as the psychic Yuri in Command & Conquer: Red Alert 2 and its expansion, Yuri's Revenge, playing the villainous Lorenzini in the 1996 film The Adventures of Pinocchio, and later reprising his role in the 1999 sequel The New Adventures of Pinocchio. He also voiced Professor Pericles in Scooby-Doo! Mystery Incorporated.

A documentary on his life and career entitled ICH-UDO...der Schauspieler Udo Kier (ME-Udo...the actor Udo Kier) was filmed for ARTE, the French-German culture channel in Europe, and released in 2012.[11] In 2013, the documentary won the New York Festival "Finalist Certificate".[12]