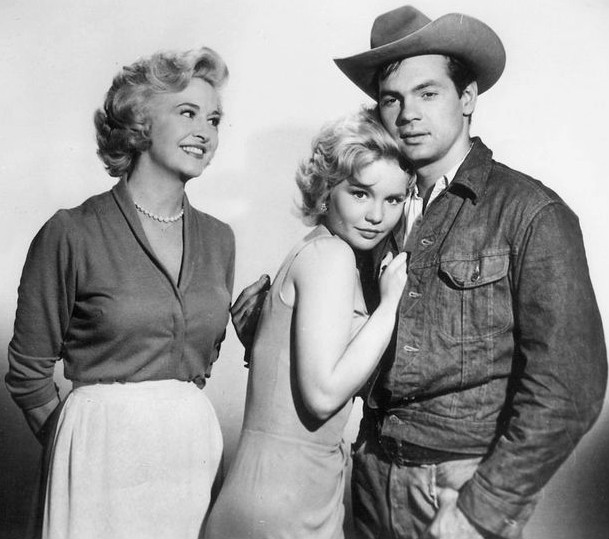 Tuesday Weld (born Susan Ker Weld; August 27, 1943) is an American actress. She began acting as a child, and progressed to mature roles in the late 1950s. She won a Golden Globe Award for Most Promising Female Newcomer in 1960. Over the following decade she established a career playing dramatic roles in films.

Her work, often as a featured performer in supporting roles, was acknowledged with nominations for a Golden Globe Award for Play It as It Lays (1972), a nomination for Academy Award for Best Supporting Actress for Looking for Mr. Goodbar (1977), an Emmy Award for The Winter of Our Discontent (1983), and a BAFTA for Once Upon a Time in America (1984). Since the late 1980s, her acting appearances have been infrequent.

Weld was born Susan Ker Weld in New York City. Her father, Lathrop Motley Weld, was a member of the Weld family of Massachusetts; he died in 1947 at the age of 49, shortly before his daughter's fourth birthday. Her mother, Yosene Balfour Ker, daughter of the artist and Life illustrator William Balfour Ker, was Lathrop Weld's fourth and final wife.[1][2] Susan Ker Weld had two siblings, Sarah King Weld (born 1935) and David Balfour Weld (born 1937).[3] Weld had her name legally changed to Tuesday Weld on October 9, 1959.[4]
Read more...

Left in financial difficulty by her husband's death, Weld's mother put Susan to work as a model to support the family. As the young actress told Life in 1971:

My father's family came from Tuxedo Park, and they offered to take us kids and pay for our education, on the condition that Mama never see us again. Mama was an orphan who had come here from London, but so far as my father’s family was concerned, she was strictly from the gutter. I have to give Mama credit—she refused to give us up… So I became the supporter of the family, and I had to take my father’s place in many, many ways. I was expected to make up for everything that had ever gone wrong in Mama’s life. She became obsessed with me, pouring out her pent-up love—her alleged love—on me, and it's been heavy on my shoulders ever since. Mama still thinks I owe everything to her.[3]

Her name became Tuesday, an extension of her childhood nickname, "Tu-Tu", so named by her young cousin, Mary Ker, who could not pronounce "Susan". She officially adopted her name in October 1959.[5]

Using Weld's résumé from modeling, her mother secured her an agent. Weld made her acting debut on television at the age of 12, and her feature film debut that year in a bit role in the 1956 Alfred Hitchcock crime drama The Wrong Man.[6]

The pressures of her career resulted in a nervous breakdown at age nine, alcoholism by age 12, and a suicide attempt about the same time.[3]

On TV she appeared in an episode of Goodyear Playhouse, "Backwoods Cinderella". She understudied on Broadway in The Dark at the Top of the Stairs.

Weld was cast in a support role in the Paul Newman-Joanne Woodward comedy Rally Round the Flag, Boys! (1958) made by 20th Century Fox. At Columbia, Weld was in The Five Pennies (1959), playing the daughter of Danny Kaye. She guest starred a number of times on The Adventures of Ozzie and Harriet (1958-59).

Weld's performance in Flag Boys impressed executives at Fox who signed her to a long term contract.[7] They put her in the CBS television series The Many Loves of Dobie Gillis, being paid $35,000 for one year.[8] Weld played Thalia Menninger, the love interest of Dobie Gillis (played by Dwayne Hickman), whose rivals for Thalia's affection included Milton Armitage (played by Warren Beatty). Although Weld was a cast member for only one season, the show created considerable national publicity for her,[9] and she was named a co-winner of a "Most Promising Newcomer" award at the Golden Globe Awards.[10][7]

At Columbia she had a leading role in a teen film, Because They're Young (1960), starring Dick Clark. She was second billed in Sex Kittens Go to College (1960) made by Albert Zugsmith at Allied Artists. She made a second film for Zugsmith, The Private Lives of Adam and Eve, made in 1959 but not released for two years later.

At Fox she played Joy, a free-spirited university student in High Time, starring Bing Crosby and Fabian Forte. She sang a love song to Fabian in the season opener of NBC's The Dinah Shore Chevy Show on October 9, 1960. Four weeks later, on November 13, Weld returned to the network as a guest star in NBC's The Tab Hunter Show. She guested in "The Mormons" for Zane Grey Theatre (1960).

For Fox, Weld was in Return to Peyton Place (1961), in the part played by Hope Lange in the original. Her portrayal of an incest victim was well received but the film was less successful than its predecessor.[3] She supported Elvis Presley in Wild in the Country (1962), along with Lange. Weld had an off-screen romance with Presley.[11]

Fox also used her as a guest star on Follow the Sun ("The Highest Wall") and Adventures in Paradise ("The Velvet Trap"). On November 12, 1961, she played a singer, Cherie, in the seventh episode of ABC's television series Bus Stop, produced by Fox, with Marilyn Maxwell and Gary Lockwood. It was an adaptation of the play by William Inge with Weld in the role originated on screen by Marilyn Monroe.

Weld's mother was scandalized by her teen daughter's affairs with older men, such as actor John Ireland, but Weld resisted, saying, "'If you don't leave me alone, I'll quit being an actress—which means there ain't gonna be no more money for you, Mama.' Finally, when I was sixteen, I left home. I just went out the door and bought my own house."

She was Stanley Kubrick's first choice to play the role of Lolita in his 1962 film of the same name, but she turned the offer down, saying: "I didn't have to play it. I was Lolita."[12]

In 1963, Weld starred along with Jackie Gleason and Steve McQueen in "Soldier in the Rain", written by Blake Edwards.

Tuesday Weld in 1964. She is seen here alongside David Janssen in the TV series The Fugitive.

In 1963, Weld guest-starred as Denise Dunlear in The Eleventh Hour, in the episode "Something Crazy's Going on the Back Room" alongside Angela Lansbury. She was in "The Legend of Lylah Clare" for The DuPont Show of the Week (1963), directed by Franklin J. Schaffner.

In 1964 she appeared in the title role of the episode "Keep an Eye on Emily" on Craig Stevens's CBS drama, Mr. Broadway. In the same year she appeared in "Dark Corner", an episode of The Fugitive.

Weld appeared with Jackie Gleason and Steve McQueen in the 1963 comedy Soldier in the Rain; her performance was well received, but the film was only a minor success. That same year she and former co-star Dwayne Hickman appeared in Jack Palance's circus drama The Greatest Show on Earth on ABC, in separate episodes. She could also be seen in episodes of Mr Broadway (1964) and The Fugitive (1964) playing a blind woman.

Weld appeared in 1965 in the successful Norman Jewison film The Cincinnati Kid, opposite Steve McQueen. There was some controversy when she refused to meet the local governor at a fund-raiser for hurricane victims, jumping out of a car in view of 70,000 people.[13] The film was a big hit.

Weld got a star role in Lord Love a Duck (1966), with Roddy McDowall, Ruth Gordon and Harvey Korman. Weld received excellent reviews but the film was a box office disappointment.

She followed it playing Abigail in a TV adaptation of The Crucible (1967), opposite George C Scott and Colleen Dewhurst. After guest starring on Cimarron Strip (1967) Weld had the star role in Pretty Poison (1968), co-starring Anthony Perkins. The film became a cult success.

Around this time Weld became famous for turning down roles in films that succeeded at the box office, such as Bonnie and Clyde, Rosemary's Baby, True Grit, Cactus Flower and Bob & Carol & Ted & Alice.[12] In a 1971 interview with the New York Times, Weld explained that she had chosen to reject these roles precisely because she believed they would be commercial successes: "Do you think I want a success? I refused 'Bonnie and Clyde' because I was nursing at the time, but also because deep down I knew it was going to be a huge success. The same was true of 'Bob and Carol and Fred and Sue' or whatever it was called. It reeked of success."[12]

The films Weld did make included I Walk the Line (1970), opposite Gregory Peck; A Safe Place (1971), co-starring Jack Nicholson and Orson Welles and directed by Henry Jaglom; and Play It as It Lays (1972), again with Perkins, for which she was nominated for a Golden Globe Award.[14]

Weld began to work again in television, starring in Reflections of Murder (1974) and F. Scott Fitzgerald in Hollywood (1975) where she played Zelda Fitzgerald.

Weld attracted attention as the favored, out-of-control Katherine in Looking for Mr. Goodbar (1977) and was nominated for an Academy Award for Best Supporting Actress; later she appeared in Who'll Stop the Rain (1978) opposite Nick Nolte; and the comedy Serial (1980).

In feature films Weld had a good support part in Michael Mann's acclaimed 1981 film Thief, opposite James Caan. She played Al Pacino's wife in Author! Author! (1982) and co-starred with Donald Sutherland in the TV movie The Winter of Our Discontent (1983). This performance earned her an Emmy nomination.

In 1984 she appeared in Sergio Leone's gangster epic Once Upon a Time in America, playing a jeweler's secretary who is in on a plan to steal a shipment of diamonds. During the robbery her character goads Robert De Niro's character, David "Noodles" Aaronson, into "raping" her with her complicity.

Weld was reunited with Tony Perkins in an episode of Mistress of Suspense (1990).

In 1993 she played a police officer's neurotic wife in Falling Down, starring Michael Douglas and Robert Duvall. She had small roles in Feeling Minnesota (1996), Investigating Sex (2001) and Chelsea Walls (2001).

Weld has been married three times. She was married to screenwriter Claude Harz, from 1965 until their divorce in 1970. They had a daughter, Natasha, in 1966.[15] Weld told Guy Flatley of The New York Times in 1971:

Mama hated my husband—she's a jealous lover, you know. She's hated all the men I've ever been involved with. But I really felt that what I had been doing up to that time with my life was probably wrong, that maybe what I should be was a housewife. Our marriage lasted 5 years; it was just another one of my mistakes.[3]

She married British actor, musician and comedian Dudley Moore in 1975. In 1976 they had a son, Patrick, an actor, director and editor, but they divorced in 1980. Five years later, she married Israeli concert violinist and conductor Pinchas Zukerman; they too divorced in 1998.

Offhand references to Weld sometimes appear in fiction and music. Some works, though, have been more directly inspired by her: