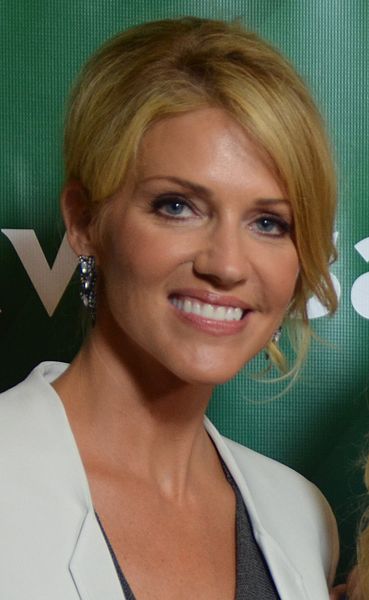 Helfer was born in rural Donalda, Alberta, to Dennis and Elaine Helfer.[2] She studied at William E. Hay Composite High School in Stettler, Alberta. She lived and worked on the family's grain farm with her three sisters—Trina, Tammy, and Tara. She was discovered at age 17 by a modeling agency scout while standing in line at a local movie theatre.[2] She is of German, English, Swedish and Norwegian descent.[3][not in citation given]
Read more...

In 1992 she won Ford Models' Supermodel of the World contest. Helfer retired from fashion modelling in 2002 and claimed all her shoots since then are related to projects or product endorsements. She has appeared in ad campaigns for Ralph Lauren, Versace, Chanel, and Giorgio Armani.[4]

Helfer has walked for top fashion shows, such as Carolina Herrera, Christian Dior, Claude Montana, Givenchy, John Galliano, and Dolce & Gabbana.[4] Helfer has appeared on the covers of Flare, Amica, ELLE, Cosmopolitan, Marie Claire, and Vogue, among others.[4] She also regularly appeared in photo shoots by Maxim magazine, was the magazine's wall calendar girl for 2005, and was ranked #57 on the Maxim's Hot 100 Women of 2007.[5] Helfer was also featured as the cover model for the February 2007 issue of Playboy.[6]

Helfer relocated to Los Angeles in 2002 to pursue a full-time acting career.[7] Her first acting assignment was a co-starring role as Sarah on the television series Jeremiah. She later played a model named Ashleigh James on the May 16, 2002, episode of CSI: Crime Scene Investigation ("The Hunger Artist"). In 2002, she played "Eva" in the independent film White Rush.[8]

In 2003, she played Number Six on Battlestar Galactica. In 2004, she portrayed Farrah Fawcett in the telefilm Behind the Camera: The Unauthorized Story of Charlie's Angels.[9] Concurrent with her role in Battlestar Galactica, Helfer began producing and hosting Canada's Next Top Model on May 31, 2006.[10] She appeared in Spiral and The Green Chain later the same year.[11]

In October 2006, it was announced that Helfer would not return to host the second season of Canada's Next Top Model so she could concentrate on Battlestar Galactica.[12] Helfer also played a major role in Electronic Arts Command & Conquer 3: Tiberium Wars, as the high-level Nod general Kilian Qatar, along with her Battlestar Galactica co-star, actress Grace Park.[13] She also starred in the episode "Roadkill" on the second season of Supernatural.

Helfer had a recurring role on CBS' Two and a Half Men. She played Gail, best friend of Charlie's (Charlie Sheen) fiancée Chelsea (Jennifer Taylor). When Chelsea finds out that her friend is recovering from a breakup, she says she should do so at Charlie's house.[14] Shortly after Chelsea and Charlie begin a trial separation, Gail begins a sexual relationship with Charlie.

In 2003, the television series Battlestar Galactica was used as the basis for a three hour miniseries on the Sci Fi channel. The project was written and produced by Ronald D. Moore and directed by Michael Rymer. Helfer played the role of Number Six, a humanoid Cylon operative. She continued that role as a regular cast member in the TV series, which completed its fourth and final season on March 20, 2009. Due to the special nature of the Number Six character - there are many "copies" of Number Six with distinct personalities - Helfer has, in effect, played numerous roles on the series. In 2009, she reprised her role as Number Six in Battlestar Galactica: The Plan - a television movie that tells the story of the series from the Cylons' point of view. In 2012, she voiced a prototype Cylon in the prequel Battlestar Galactica: Blood & Chrome.

In August 2008 Helfer appeared on the stage of NVISION 08, an event sponsored by NVIDIA, where she discussed her role in Battlestar Galactica as well as the use of computer graphics on the show.[15] Helfer appeared as Chuck’s Season 2 secret agent "handler" in the NBC series Chuck,[16] and as Michael Westen's Season 2 nemesis in the USA Network series Burn Notice as "Carla". She appears as herself in Old 97's music video for their song, "Dance with Me".

She guest starred in "Resonance", the second episode of Warehouse 13 as FBI Agent Bonnie Belski on Syfy. She made a guest appearance in the pilot episode of Fox's 2009 mid-season series Human Target. She has played several prominent video game roles in recent years; including Kilian Quatar in Command & Conquer 3: Tiberium Wars, Veronica Dare in Halo 3: ODST and EDI, the ship-borne artificial intelligence aboard the Normandy SR-2 in Mass Effect 2 and Mass Effect 3. She voices Sarah Kerrigan in StarCraft II: Wings of Liberty as well as the expansion sets Starcraft II: Heart of the Swarm and Starcraft II: Legacy of the Void. Helfer voices the Black Cat in The Spectacular Spider-Man and she reprises the role in Spider-Man: Web of Shadows and Ultimate Spider-Man.[8]

Helfer joined the cast of Jerry Bruckheimer's TNT drama, Dark Blue,[17] as FBI Special Agent Alex Rice. The show was cancelled in November 2010 because of its very low ratings.[18] In October 2010 she made a guest appearance on Lie to Me.[19]

In 2011 she starred in The Black Keys' music video for "Howlin' for You".[20] She made guest appearances in No Ordinary Family (2011),[21] and Franklin & Bash (2011).[22] In 2011, Helfer starred as Morgana, a necromancer, in the TV series pilot 17th Precinct from Ron Moore with Galactica's co-stars James Callis and Jamie Bamber.[23] In October 2011 she got the lead role in the TV Pilot Scent of the Missing as Susannah, a K-9 Search and Rescue Volunteer.[24] In November 2011, she appeared in the Hallmark TV movie Mistletoe Over Manhattan.[25] For 2012, she signed for the recurring role of Alex Clark in the new NBC TV Series The Firm.[25] On May 16, 2012, she appeared in the two-part finale of season 7 of the CBS series Criminal Minds, in which she led a team of bank-robbing serial killers. She guest starred in the second season of the Jane Espenson scripted romantic comedy web series, Husbands.[26]

In 2014 she played Molly Parker on ABC's Killer Women, a remake of Argentinian drama Mujeres Asesinas, with producer Sofia Vergara.[8] Also in 2014 she played Viondra Denniger, the steward and wife of the captain of the titular starship of the miniseries Ascension on its long journey carrying people to populate a new world. Helfer voiced Sonya Blade in the fighting game, Mortal Kombat X, which was released in April 2015.

In 2015, she appeared in the series finale of Falling Skies as the Espheni Queen, the leader of the alien race that had invaded Earth and devastated humanity. She also played Louise, a woman attending a doll convention, in the web series Con Man.

In 2016, Helfer was added to the main cast for Season 2 of the Fox TV series Lucifer, playing the lead character's mother who is also the exiled wife of God.[27]

Helfer at Pre-Emmy party in September 2008

She was married to Jonathan Marshall, a lawyer whom she met at a mutual friend's birthday party.[3] They separated in May 2017 and Helfer filed for divorce in January 2018.[28]

She has four artificial discs in her back and two in her neck, resulting from an incident in which a piece of luggage was dropped on her head while sitting on a commercial airliner, and two in her lower back from mishaps while doing her own stunts.[29]

She co-founded the charity web site "Acting Outlaws"[30] with former Battlestar Galactica co-star Katee Sackhoff, which is open for donations for different causes and charity events.[31] She is also involved in various causes, from animal rescue[32] to the oil spill in the Gulf of Mexico.[33] In 2014, she appeared in a PETA video campaign, encouraging cat owners to keep their pets indoors.[34]