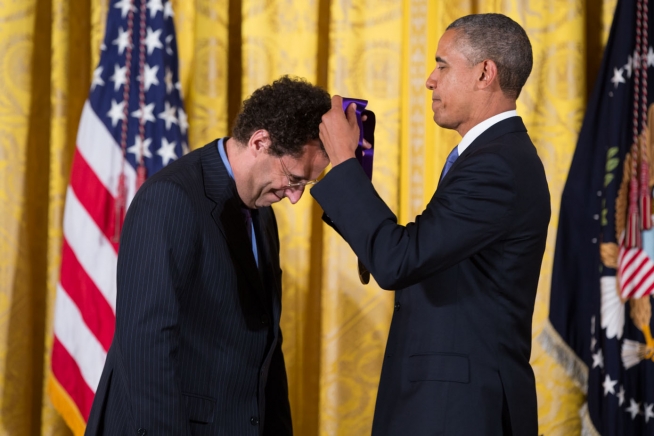 Anthony Robert Kushner (born July 16, 1956) is an American playwright and screenwriter. He received the Pulitzer Prize for Drama in 1993 for his play Angels in America. He co-authored with Eric Roth the screenplay for the 2005 film Munich, and he wrote the screenplay for the 2012 film Lincoln. Both films were critically acclaimed, and he received Academy Award nominations for Best Adapted Screenplay. He received a National Medal of Arts from President Barack Obama in 2013.[1]

Kushner was born in Manhattan, the son of Sylvia (née Deutscher), a bassoonist, and William David Kushner, a clarinetist and conductor.[2][3] His family is Jewish, descended from immigrants from Russia/Poland.[4][5][6][7][8] Shortly after his birth, Kushner's parents moved to Lake Charles, Louisiana, the seat of Calcasieu Parish where he spent his childhood. During high school Kushner was active in policy debate. In 1974, Kushner moved back to New York to begin his undergraduate college education at Columbia University, where he received a Bachelor of Arts degree in Medieval Studies in 1978.[9] He attended the Tisch School of the Arts at NYU, graduating in 1984. During graduate school, he spent the summers of 1978-1981 directing both early original works (Masque of the Owls and Incidents and Occurrences During the Travels of the Tailor Max) and plays by Shakespeare (A Midsummer Night's Dream and The Tempest) starring the children attending the Governor's Program for Gifted Children (GPGC) in Lake Charles.

Kushner's best known work is Angels in America (a play in two parts: Millennium Approaches and Perestroika), a seven-hour epic about the AIDS epidemic in Reagan-era New York, which was later adapted into an HBO miniseries for which Kushner wrote the screenplay. His other plays include Hydriotaphia, Slavs!: Thinking About the Longstanding Problems of Virtue and Happiness, A Bright Room Called Day, Homebody/Kabul, and the book for the musical Caroline, or Change. His new translation of Bertolt Brecht's Mother Courage and Her Children was performed at the Delacorte Theater in the summer of 2006, starring Meryl Streep and directed by George C. Wolfe. Kushner has also adapted Brecht's The Good Person of Szechwan, Corneille's The Illusion, and S. Ansky's play The Dybbuk.

In the early 2000s, Kushner began writing for film. His co-written screenplay Munich was produced and directed by Steven Spielberg in 2005. In January 2006, a documentary feature about Kushner entitled Wrestling With Angels debuted at the Sundance Film Festival. The film was directed by Freida Lee Mock. In April 2011 it was announced that he was working with Spielberg again, writing the screenplay for an adaptation of historian Doris Kearns Goodwin's book Team of Rivals: The Political Genius of Abraham Lincoln.[15] The screenplay for Lincoln would go on to receive multiple awards, in addition to nominations for Best Adapted Screenplay at the Golden Globes and The Oscars.[16]

In a 2015 interview actress/producer Viola Davis revealed she had hired Kushner to write an as yet untitled biopic about the life of Barbara Jordan that she planned to star in.[17]

In 2016, Kushner worked on a screenplay version of August Wilson's play Fences; the resulting film Fences, directed by Denzel Washington, was released in December 2016.

Kushner is famous for frequent revisions and years-long gestations of his plays. Both Angels in America: Perestroika and Homebody/Kabul were significantly revised even after they were first published. Kushner has admitted that the original script version of Angels in America: Perestroika is nearly double the length of the theatrical version.[18] His newest completed work, the play The Intelligent Homosexual's Guide to Capitalism and Socialism with a Key to the Scriptures, began as a novel more than a decade ago. Said work finally opened on May 15, 2009.

In 2018 it was announced that Kushner was working on a script of a remake of West Side Story for Spielberg to direct.[19]

Kushner speaking at the University of Maryland in 2011.

Kushner's criticism of Israel's treatment of the Palestinians and of the increased religious extremism in Israeli politics and culture has created some controversy with U.S. Jews,[20] including some opposition to his receiving an honorary doctorate at the 2006 commencement of Brandeis University. The Zionist Organization of America unsuccessfully lobbied the university to rescind its invitation to Kushner.[21] During the controversy, quotes critical of Zionism and Israel made by Kushner were circulated. Kushner said at the time that his quotes were "grossly mischaracterized." Kushner told the Jewish Advocate in an interview, "All that anybody seems to be reading is a couple of right-wing Web sites taking things deliberately out of context and excluding anything that would complicate the picture by making me seem like a reasonable person, which I basically think I am."[22] In an interview with the Jewish Independent, Kushner commented, "I want the state of Israel to continue to exist. I've always said that. I've never said anything else. My positions have been lied about and misrepresented in so many ways. People claim that I'm for a one-state solution, which is not true." However, he later stated that he hopes that "there might be a merging of the two countries because geographically kind of ridiculous looking on a map," although he acknowledged that political realities make this unlikely in the near future.[23]

Kushner has even received backlash from family members due to his political views of Israel.[24]

On May 2, 2011, the Board of Trustees[25] of the City University of New York (CUNY), at their monthly public meeting, voted to remove (by tabling to avoid debate) Kushner's name from the list of people invited to receive honorary degrees, based on a statement by trustee Jeffrey S. Wiesenfeld about Kushner's purported statements and beliefs about Zionism and Israel.[26][27] In response, the CUNY Graduate Center Advocate began a live blog on the "Kushner Crisis" situation, including news coverage and statements of support from faculty and academics.[28] Three days later, CUNY issued a public statement that the Board is independent.[29] On May 6, three previous honorees stated they intended to return their degrees: Barbara Ehrenreich, Michael Cunningham and Ellen Schrecker.[11] Wiesenfeld has said that if Kushner would renounce his anti-Israel statements in front of the board of trustees, he would be willing to vote for him.[30] The same day, the board of trustees moved to reverse its decision.[31]

Kushner was quoted in the 2010 book "It All Changed in an Instant: More Six-Word Memoirs" on page 76. His six-word memoir was "At least I never voted Republican."

Kushner and his spouse Mark Harris held a commitment ceremony in April 2003,[32] the first same-sex commitment ceremony to be featured in the Vows column of The New York Times.[33] Harris is an editor of Entertainment Weekly and author of Pictures at a Revolution - Five Movies and the Birth of the New Hollywood.

In summer 2008, Kushner and Harris were legally married at the city hall in Provincetown, Massachusetts.[34]

The stage performance rights to most of these plays are licensed by Broadway Play Publishing Inc.

Report a problem
Write to Tony Kushner at FanPal • 2022