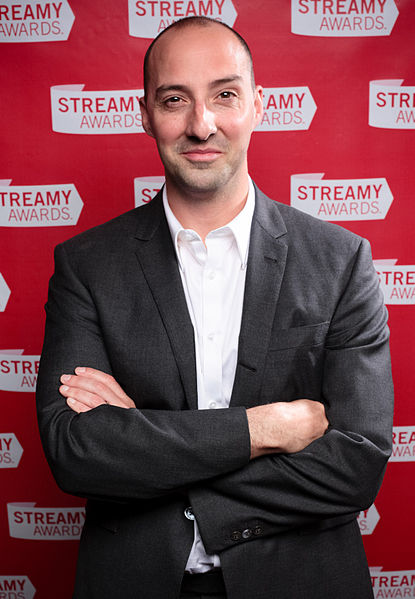 Anthony Hale (born September 30, 1970) is an American actor and comedian. He is known for his role in the Fox comedy series Arrested Development as the neurotic Buster Bluth. Since 2012, he has played Gary Walsh on the HBO comedy Veep, for which he won the 2013 and 2015 Primetime Emmy Award for Outstanding Supporting Actor in a Comedy Series.

Hale was born in West Point, New York. His mother, Rita (née Garnett), worked as a staff assistant to State Representative Kathy Ashe, and his father, Mike Hale, taught nuclear and atomic physics and served in the military.[1][2] Hale grew up in Tallahassee, Florida, where he attended the Young Actors Theatre and participated in numerous theatrical and musical productions. He graduated from Leon High School in 1988. He graduated from Samford University in Birmingham, Alabama, where he became a member of Sigma Chi Fraternity, with a journalism degree in 1992. He completed graduate studies in 1995 from the School of Communication and the Arts of Regent University in Virginia.[3] After graduating, he lived in New York City for nearly ten years. While in New York, Hale helped found The Haven, an artistically minded community of Christians that meets weekly. He also studied acting at The Barrow Group, a New York City theatre company.[4]
Read more...

Hale first obtained his Screen Actors Guild card when he appeared in a commercial for MCI Inc., though it never aired.[5] He made minor guest appearances in TV shows such as Dawson's Creek, The Sopranos, and Sex and the City. He is often recognized for his role in the famous Volkswagen television commercial aired in 1999, in which he danced to the song "Mr. Roboto", which was later spoofed on the Fox sitcom Arrested Development. From 2003 to 2006, and returning to the role in 2013, Hale found success in television when he was cast as Buster Bluth, the hapless, neurotic son with "mother issues" on Arrested Development. Hale also appeared in a season ten episode of MADtv in a parody of COPS, where two British robbers try to stop a domestic dispute among the royal family.

In March 2006, Hale was cast in a co-starring role as the video store owner Simon in the NBC sitcom Andy Barker P.I., starring Andy Richter and co-created by Conan O'Brien.[6] He appeared in minor roles in Stranger Than Fiction and Because I Said So. He was the voice of Furlough in The Tale of Despereaux, an animated children's film released in 2008.[7] Hale had a recurring role as Emmett on Chuck, beginning in October 2008 and ending in January 2010. His departure made room for his starring role on the NBC web series Ctrl, which premiered on July 13, 2009. He appeared in a cameo in the second episode of the first season of Showtime's dramedy United States of Tara, as English teacher Oral Gershenoff. He joined the cast of Numbers in 2009, in the recurring role of Professor Russell Lazlo.

In 2012, Hale starred in the drama comedy Not That Funny. He also guest-starred on NBC's long-running show Law & Order: SVU as Rick Simms, a teacher who gets fired from his job after being accused of inappropriate behavior with a student.[8]

In 2012, Hale was cast in the HBO comedy Veep as Gary Walsh, the personal assistant to Vice President-turned-President Selina Meyer (portrayed by Julia Louis-Dreyfus).[9] On September 22, 2013, Hale won a Primetime Emmy Award for Outstanding Supporting Actor in a Comedy Series for his work in the show's second season. This was his first major award.[10] He earned his second nomination in 2014, but lost the award to Ty Burrell. However, Hale won his second Primetime Emmy Award with his third nomination in 2015, in the same ceremony where Veep won its first Primetime Emmy Award for Outstanding Comedy Series.

In 2017, Hale hosted the 9th Annual Shorty Awards at the PlayStation Theater in New York City. In the same year, Hale was cast in the recurring role of Jerome Squalor on the second season of the Netflix comedy drama series A Series of Unfortunate Events.[11]

Hale married Emmy Award-winning makeup artist Martel Thompson on May 24, 2003.[12] They reside in Pasadena, California with their daughter Loy.[citation needed]