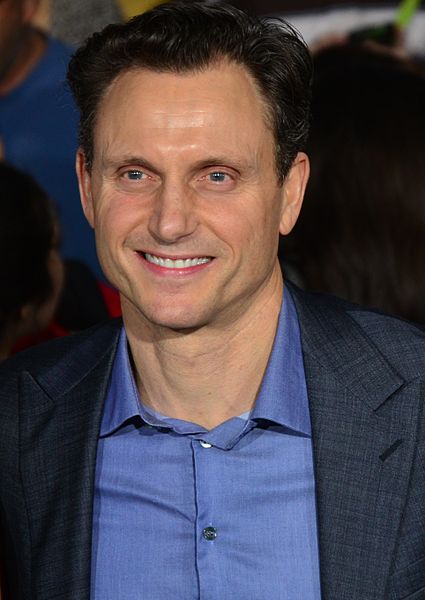 Anthony Howard "Tony" Goldwyn (born May 20, 1960) is an American actor, singer, producer, director and political activist. He portrayed Carl Bruner in Ghost, Colonel Bagley in The Last Samurai, and the voice of the title character of the Disney animated film Tarzan. He starred in the ABC legal/political drama Scandal, as Fitzgerald Grant III, President of the United States from 2012 to 2018.[1]

Goldwyn was born in Los Angeles, California, the son of actress Jennifer Howard and film producer Samuel Goldwyn Jr. Goldwyn's paternal grandparents were mogul Samuel Goldwyn, a Polish Jewish immigrant, from Warsaw, and actress Frances Howard, who was originally from Nebraska.[2] His maternal grandparents were playwright Sidney Howard and actress Clare Eames. One of his maternal great-great-grandfathers was Maryland Governor and Senator William Thomas Hamilton.[3] Goldwyn attended Hamilton College in Clinton, New York, Brandeis University in Waltham, Massachusetts (where he received his Bachelor of Fine Arts degree), and the London Academy of Music and Dramatic Art.
Read more...

Goldwyn at the film premiere of Divergent in March 2014

Following his departure from drama school, Goldwyn began acting in guest star roles in the mid-1980s. Goldwyn is well known for his portrayal of Carl Bruner, friend-turned-betrayer of Patrick Swayze's character Sam Wheat in Ghost. He is also well known for his turn on the comedy series, Designing Women in which he played a young interior designer named Kendall Dobbs who was HIV positive, and asked the women of Sugarbakers to design his funeral. In the HBO miniseries From the Earth to the Moon, Goldwyn played astronaut Neil Armstrong, commander of Apollo 11. He also voiced the title character from the 1999 animated feature film, Tarzan, produced by Walt Disney Feature Animation and reprised the role in the video games Disney's Tarzan Untamed and Kingdom Hearts. He had a recurring role on the NBC-Universal drama Law & Order: Criminal Intent as Frank Goren, brother of lead character Robert Goren, played by Vincent D'Onofrio. He also had acting and directing duties for the first season of Dexter for Showtime (brother John Goldwyn is executive producer).

As a stage actor, Goldwyn has appeared twice in Off-Broadway shows at Second Stage Theatre and on Broadway at Circle in the Square Theatre. At Second Stage Theatre he appeared in Theresa Rebeck's Spike Heels (1992) alongside Kevin Bacon and Julie White. In the summer of 2006 at Second Stage Theatre he starred opposite Kate Burton in another Rebeck play, The Water's Edge. Goldwyn played J. D. Sheldrake, the philandering business executive, in the Broadway musical Promises, Promises starring Sean Hayes and Kristin Chenoweth.[4] The cast recording was released on June 23, 2010, with Goldwyn in three tracks.[5][6]

Goldwyn played Captain von Trapp (opposite Laura Osnes as Maria) in a concert performance of The Sound of Music at Carnegie Hall on April 25, 2012. The benefit included opera singer Stephanie Blythe as the Mother Abbess, Brooke Shields as Baroness Schraeder and Patrick Page as Max.[7]

As a director, Goldwyn has directed four feature films, A Walk on the Moon[8], Someone Like You, The Last Kiss, and Conviction.[9] He has also directed many episodes of television series such as Without a Trace, The L Word, Dexter, Law & Order: Criminal Intent, Grey's Anatomy and Scandal. In 2014, he directed the pilot episode of the WE tv series, The Divide, of which he also served as executive producer along with Oscar-nominated screenwriter Richard LaGravenese.

Goldwyn starred as President Fitzgerald Grant III in the ABC legal/political drama Scandal from 2012 to 2018.

In 2013, Goldwyn was cast in the Lifetime original movie, Outlaw Prophet, as Warren Jeffs.[10] In 2014, he appeared in Divergent as Andrew Prior, Caleb (Ansel Elgort) and Tris' (Shailene Woodley) father. In 2015 he signed on to star in James Gunn's horror thriller film The Belko Experiment.[11]

A former President of the Creative Coalition, Goldwyn is also heavily involved with arts advocacy. He is also a spokesperson of the AmeriCares Foundation. He was an avid supporter of Hillary Clinton and in 2016 directed a commercial featuring his Scandal co-star Kerry Washington, Viola Davis (of How to Get Away with Murder), Ellen Pompeo, and Shonda Rhimes in support of Clinton's presidential campaign.

Goldwyn has been married to production designer Jane Michelle Musky since 1987.[12] They have two daughters.[13] Additionally, Goldwyn's brother John is a former executive of Paramount Pictures and the executive producer of Dexter. His brother Peter is also a film producer and the current President of Samuel Goldwyn Films.