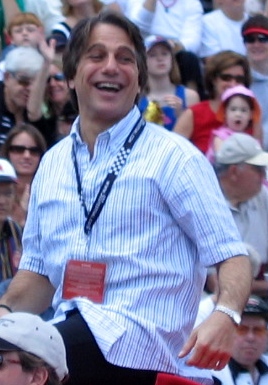 Tony Danza (born Antonio Salvatore Iadanza; April 21, 1951)[1] is an American actor and former professional boxer. He is best known for starring on the TV series Taxi and Who's the Boss?, for which he was nominated for an Emmy Award and four Golden Globe Awards. In 1998, Danza won the People's Choice Award for Favorite Male Performer in a New Television Series for his work on the 1997 sitcom The Tony Danza Show (not to be confused with his 2004-2006 daytime variety talk show of the same name).

Danza was born in Brooklyn, New York,[1] to parents Anne Cammisa (1925-1993) and Matty Iadanza (1920-1983) [2] His mother was a bookkeeper and his father worked as a waste collector in Brooklyn.[1][3] Danza's father was of Italian ancestry and Danza's mother was an immigrant from the town of Campobello di Mazara in the Sicilian province of Trapani.[2][4] He has a younger brother, Matty Jr. (born 1954), a Los Angeles restaurant owner.[5] When Danza was 14, he and his family relocated to Malverne, New York, on Long Island. Danza attended Valley Stream North High School, graduating in 1969.[6] In the first episode of his show Teach: Tony Danza, Danza describes himself as a "bad student" in high school. He earned a bachelor's degree in history in 1972 from the University of Dubuque,[7] which he attended on a wrestling scholarship. In 1975, as a joke, Danza's friends entered him in the New York City Golden Gloves. After knocking out his first six opponents all in the first round, Danza was knocked out in the finals.[8]

During his first year of college, he had the Robert Crumb "Keep on Truckin'" character tattooed on his upper right arm. In a 1985 interview in Us Weekly magazine, Danza remarked, "I was playing pool with a guy who had all these tattoos, and I wanted to be friends."[9] Danza also sports a "Keep Punching" boxing gloves tattoo on his right shoulder as well as "Tracy", his (former) wife's name, on his chest.[10] In college, Danza met and married his first wife.

Danza was a professional boxer with a record of 9-3 (9 knockouts, 7 in the first round), with all but one of his fights, wins and losses, ending in a knockout.[11]

Shortly after his college graduation from the University of Dubuque, Danza was discovered by a producer at a boxing gymnasium in New York.[12] He then earned a spot on the television show Taxi, playing a cab driver and part-time boxer Tony Banta, and later starred on Who's the Boss?, in which he portrayed a former baseball player, housekeeper, and single father Tony Micelli. For his contribution to the television industry, in 1988, Danza was honored with a star on the Hollywood Walk of Fame at 7000 Hollywood Boulevard. Danza also plays the role of a baseball player in Angels in the Outfield (1994).

He was nominated for an Emmy Award[13] for a guest-starring 1998 role in the TV series The Practice. His movie debut was in the comedy The Hollywood Knights (1980), which was followed by Going Ape! (1981). He received critical acclaim for his performance in the 1999 Broadway revival of the Eugene O'Neill play The Iceman Cometh. In 2002, Danza released his debut album The House I Live In as a 1950s-style crooner.[14]

Danza hosted his own TV talk show, The Tony Danza Show, that was produced each weekday morning in his hometown of New York and was syndicated across the US. On May 9, 2005, during a go-kart race with NASCAR star Rusty Wallace, who was a guest on the show, Danza's kart flipped after Wallace accidentally bumped him.[15] Neither he nor Wallace was wearing a helmet at the time, but both were uninjured. Danza returned to go-kart racing on October 20, 2005, to challenge IndyCar driver Danica Patrick, but his brakes malfunctioned and he skidded into a wall, unharmed. His daytime talk show ended in May 2006; the last live episode aired on May 26, 2006.[citation needed]

A Broadway adaptation of 1992 film Honeymoon in Vegas opened on a pre-Broadway run at New Jersey's Paper Mill Playhouse on September 26, 2013, co-starring Danza and Tony nominee Rob McClure, with Gary Griffin directing.[20] Danza was inducted into the Ride of Fame in December 2014, and the double-decker sightseeing bus commemorated his role in the Broadway musical.[21]

In June 2017, Netflix announced that Danza would star in a new series, The Good Cop. Danza will portray "a disgraced, former NYPD officer who never followed the rules." [22][23]

In August 2009, it was reported that Danza would appear in a new A&E reality show Teach: Tony Danza, in which he would co-instruct a 10th grade English class at Northeast High School in Philadelphia. The series was filmed during the 2009-2010 school year and premiered on October 1, 2010. The book I'd Like to Apologize to Every Teacher I Ever Had: My Year as a Rookie Teacher at Northeast High (ISBN 9780307887863), which was released in 2012, was based on his year of teaching.

Danza's first marriage was to Rhonda Yeoman. They wed in 1970 and divorced in 1974. Their son Marc appeared with Tony on Taxi in two episodes as Brian Sims. Tony and Rhonda reconciled in 1983 and had a daughter.[24]

In 2008, Danza and his son Marc published a cookbook, Don't Fill Up on the Antipasto: Tony Danza's Father-Son Cookbook.[27]