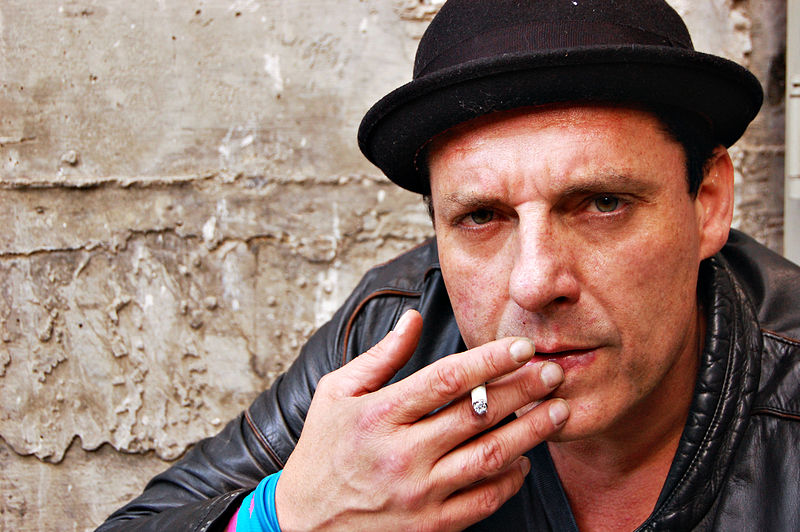 Sizemore was born in Detroit, Michigan. His mother, Judith (née Schannault), was a member of the city of Detroit ombudsman staff, and his father, Thomas Edward Sizemore, Sr., was a lawyer and philosophy professor. He was raised Roman Catholic.[2][3]

One of Sizemore's earliest film appearances was in Oliver Stone's Born on the Fourth of July (1989). Other early roles included Lock Up (1989), Harley Davidson and the Marlboro Man (1991), Point Break (1991), True Romance (1993), Natural Born Killers (1994) and Strange Days (1995). Sizemore starred in the independent drama film Love Is Like That (1993) with actress and model Pamela Gidley and had a supporting role in Kevin Costner's Wyatt Earp (1994) as Bat Masterson. For his performance in Heart and Souls (1993), he was nominated for the Saturn Award for Best Supporting Actor.[5]

A succession of well-received supporting parts followed, notably including his portrayal of Michael Cheritto in the heist film Heat (1995). Sizemore's first major leading role was as Vincent D'Agosta in The Relic (1997). Sizemore had a recurring role on the television series China Beach (1988-1991) as an enlisted man named Vinnie who was in love with Dana Delany's character. Sizemore continued to play leading and character parts in many films, notably Devil in a Blue Dress (1995), Bringing Out the Dead (1999) and Witness Protection (1999). Saving Private Ryan (1998) has proven to be his most commercially successful project to date, bringing in $217,000,000 at the box office.[6]

In the early 2000s, Sizemore appeared in actions films such as Pearl Harbor (2001), starring Ben Affleck, and Ridley Scott's Black Hawk Down (2001). He had a voice role as Sonny Forelli in the video game Grand Theft Auto: Vice City. Sizemore starred in Ticker (2001), an action film directed by Albert Pyun, with Steven Seagal and Dennis Hopper. He also starred in the well-reviewed but short-lived television drama series Robbery Homicide Division (2001); it was cancelled midway through its first season. He appeared prominently in the Mel Gibson-produced Paparazzi (2004) and played an undercover cop in Swindle (2006), opposite Sherilyn Fenn.

That same year, he starred in The Genius Club (2006), playing a terrorist who taunts seven geniuses into solving the world's problems in one night. He went on to a leading role in the action/thriller film Splinter (2006) with Edward James Olmos. The next year, television network VH1 aired a six-episode reality TV series called Shooting Sizemore (2007), depicting the actor's life as he struggled to regain his career in the midst of battling long-standing addictions to methamphetamine and heroin.[7] The series also covered an ongoing legal appeal of his conviction for an assault of former Hollywood madam Heidi Fleiss.[8] In the same year, the actor starred in the Indie drama film Oranges (2007) with Tom Arnold and Jill Hennessy, which was directed by Syrian director and producer Joseph Merhi.

Sizemore performed in two films that screened at the 2008 Sundance Film Festival, Red (2008) and American Son (2008). He was highly prolific that year, starring in The Last Lullaby (2008), The Flyboys (2008) with Stephen Baldwin, action film Stiletto (2008) with Tom Berenger and Michael Biehn, drama film Toxic (2008) with Costas Mandylor, and the Canadian drama A Broken Life (2008) with Ving Rhames.

He went on to appear in five episodes of the television series Crash (2008-2009) with Dennis Hopper and the comedy film Super Capers (2009). Sizemore starred in the indie horror film C.L.A.S.S. (2010) and co-starred with Kyra Sedgwick and Vincent D'Onofrio in the comedy-drama film Chlorine (2013).[9] Sizemore starred alongside martial arts actor Mark Dacascos in the action movie Shadows in Paradise (2010), followed by an appearance as a trucker in an episode of It's Always Sunny in Philadelphia.

Sizemore appeared alongside the Insane Clown Posse in the comedy film Big Money Rustlas (2010) and the drama 513 with Michael Madsen. Sizemore has roles in the films Suing the Devil (2011) and White Knight (2011), as well as the adventure film The Age of Reason (2014). He saw a career resurgence when he was cast as a series regular in the USA Network action program Shooter (2016-), starring Ryan Phillippe. He went on to receive positive notices for the drama thriller Calico Skies (2016).[10][11] In 2017, he appeared as insurance agent Anthony Sinclair in David Lynch's revival miniseries Twin Peaks,[12] and portrayed FBI Agent Bill Sullivan in the drama film Mark Felt: The Man Who Brought Down the White House.[13]

Sizemore married actress Maeve Quinlan in 1996, but divorced in 1999 because of issues associated with his drug problems. In 2010, Sizemore appeared as a patient/castmember on VH1's third season of Celebrity Rehab.[14]

In July 2005, Sizemore became a father when Janelle McIntire gave birth to twins.[15] On October 19, 2005, Vivid Entertainment released The Tom Sizemore Sex Scandal, a sex tape featuring Sizemore and multiple women.[16] In the video, Sizemore claimed to have had sex with Paris Hilton, an allegation that she later denied, claiming it was a ploy by Sizemore to increase sales.[17]

In November 2017, it was revealed by The Hollywood Reporter that Sizemore had been kicked off the set of the film Born Killers in 2003 for allegedly sexually molesting an 11-year-old actress when the film was in production near Salt Lake City, Utah.[18] Sizemore denied any wrongdoing, and was allowed back on the film set after the Salt Lake County prosecutor's office decided against going forward with the case "due to witness and evidence problems."[19] In May 2018, the now 26 year old actress filed a lawsuit against Sizemore, claiming that his alleged abuse caused longstanding emotional problems and seeking at least $3 million. A statement from Sizemore's publicist again denied the abuse, noting that nothing amiss was reported by a Born Killers staff member whose duty was supervising child actors on set.[20]

Sizemore, who has battled drug addiction since he was 15,[21] was convicted in 2003 of assault and battery against his girlfriend, the former "Hollywood Madam" Heidi Fleiss.[22] Sizemore was then sentenced to 7 months in jail and four months in drug treatment for repeatedly failing drug tests while on probation on March 25, 2005.[23] Sizemore was caught attempting to fake the urine test using a Whizzinator.[24][25][26] Fleiss' restraining order against him had lapsed by the time they appeared together in the third season of Celebrity Rehab with Dr. Drew in 2010.[27]

On May 8, 2007, while still on probation for a previous drug conviction, Sizemore was arrested outside the Four Points Sheraton hotel in Bakersfield, California for possession of methamphetamine.[28]

In early 2014, a recording emerged of Sizemore alleging that former girlfriend Elizabeth Hurley had an affair with Bill Clinton in 1998.[29] Under threat of legal action, Sizemore admitted that the allegation was false. He elaborated that the recording was made without his knowledge during a time when he was battling substance abuse.[30]

Sizemore had been approached to appear in the first season of the reality television series Celebrity Rehab with Dr. Drew, but declined. He met with Drew Pinsky about appearing in the second season, sitting in Pinsky's office for two hours, as Pinsky recounted, "sweating and completely high on drugs, talking a million miles an hour, acting like he was going to do it then deciding he didn't want to." Sizemore ultimately decided to appear in the show's third season, but did not appear in the season premiere. Because Heidi Fleiss was also in treatment on the show that season, both she and Sizemore had to consent to appear together. The season premiered in January 2010, with Sizemore's arrival at the clinic chronicled in the third episode, and his reunion with Fleiss was amicable.[27] By the season's end, Fleiss lashed out at Sizemore at their graduation ceremony, taunting him that "the thought of being with would turn women gay."

In February 2017, Sizemore pleaded no contest to two charges of domestic abuse for assaulting his girlfriend, for which he was sentenced to 36 months summary probation, as well as 30 days of community service, as well as being forced to complete a year-long domestic violence program, to abide by two protective orders associated with the charges, and was also ordered to pay various fees. The deal was made by Sizemore to avoid spending 210 days in jail.[31]