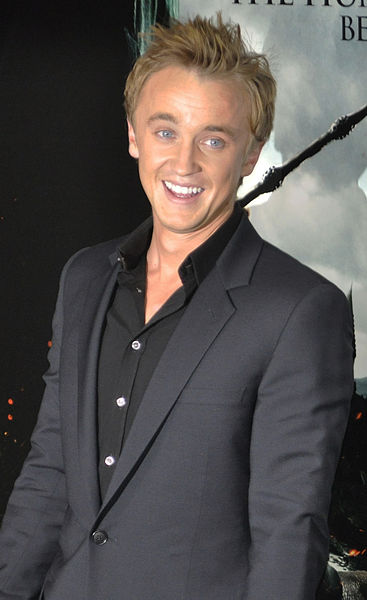 Thomas Andrew Felton[1] (born 22 September 1987)[2] is an English actor and musician. Felton began appearing in commercials when he was eight years old for companies such as Commercial Union and Barclaycard. He made his screen debut in the role of Peagreen Clock in The Borrowers (1997) and he portrayed Louis T. Leonowens in Anna and the King (1999). He rose to prominence for his role as Draco Malfoy in the film adaptions of the best-selling Harry Potter fantasy novels by J.K. Rowling. His performances in Harry Potter and the Half-Blood Prince and Harry Potter and the Deathly Hallows - Part 1 won him two consecutive MTV Movie Awards for Best Villain in 2010 and 2011.

Following the conclusion of the series in 2011, Felton appeared in the 2011 film Rise of the Planet of the Apes, a reboot of the Planet of the Apes series.[3] He had roles in the minor films From the Rough (2011) and The Apparition (2012), starred as James Ashford in the critically acclaimed period drama film Belle (2013), followed by roles in In Secret (2014) and Against the Sun (2014). Felton's 2016 films include the epic biblical drama Risen, alongside Joseph Fiennes, and the period biopic A United Kingdom, alongside David Oyelowo and Rosamund Pike. He portrayed Julian Albert on The Flash.

Felton was born in Epsom, the son of Sharon and Peter Felton. He was educated at West Horsley's Cranmore School until the age of thirteen, after which time he attended The Howard of Effingham School. Felton is a singer and was part of a choir at the age of seven. He was a member of four school choirs and was given the chance to be part of the Guildford Cathedral Choir. He has three older brothers; Ashley, Jonathan and Chris.[4]
Read more...

Felton began acting in adverts for companies such as Commercial Union[5] and Barclaycard.[2] In 1998, he performed the voice of James in the television series Bugs and landed his first feature film role in 1997 when he played the role of Peagreen Clock in Peter Hewitt's film The Borrowers.[6][7] Felton played witness Thomas Ingham opposite Clive Owen in Second Sight in 1999.[6][8] Felton's role of Louis T. Leonowens in the film Anna and the King, starring Jodie Foster, was also filmed in 1999 in Malaysia.[2] Felton made an appearance in the episode "Hide and Seek" of Second Sight 2 followed in 2000.[9] The Guildford Cathedral Choir also offered him a position.[10]

On 11 November 2005, he and Rupert Grint presented Liz Carnell with the Daily Mirror's Pride of Britain Award for all of her work to raise awareness of the dangers of bullying.[11][12] Felton worked on Harry Potter and the Order of the Phoenix throughout 2006. Having read more of the Harry Potter books, Felton reflected: "I have had input into Draco. If they give me a line and I do not think it is something he would say, I suggest changing it. They do listen to you and you do feel a part of it."[13]

On 12 November 2008, Felton appeared alongside Jack Osbourne on Adrenaline Junkie as he participated in various challenges in South Africa, including a 200ft bungee jump on Bloukrans Bridge, took a ride in a helicopter, followed by a parachute freefall and came face-to-face with Great White sharks.

Felton also appeared in Harry Potter and the Half-Blood Prince, the sixth film of the series.

[17] When asked whether he was looking forward to playing a good guy in the future he answered: "No. Well, I don't know. I suppose for now I'm happy with sticking to what he is. But after the Potter legacy is over I look forward to playing a good guy, or someone different anyway; someone not so spiteful."[18] Felton also played the character Simon in the 2009 horror/thriller movie The Disappeared.[19]

Felton posted three music videos on YouTube under an account called "Feltbeats", in which he performs fragments of original songs. Nine songs have been re-recorded and are now available on iTunes: "Time Well Spent," "Time Isn't Healing", "One of These Days", "Under Stars," "Right Place, Right Time," "In My Arms," "All I Need," and "I Will Be There" join the instrumental "Silhouettes in Sunsets." He also recorded an album titled In Good Hands. It includes the six songs "If You Could Be Anywhere", "We Belong", "When Angels Come", "Convinced", "Father of Mine", and "If That's Alright with You".

In November 2010, the film White Other, which Tom played the main character, Ray Marsden, was released. Tom's character Ray is a troubled youth in the "ends" of England and Imelda Staunton, who played Dolores Umbridge in Harry Potter and the Order of the Phoenix and Harry Potter and the Deathly Hallows - Part 1, also makes an appearance as one of the other main roles in the film.[21]

Felton had a cameo role in Get Him to the Greek, released on 4 June 2010.[22] He portrayed the human character Dodge Landon in the 2011 science-fiction film Rise of the Planet of the Apes,[3] and played a paranormal investigator in the thriller film The Apparition (2012).[23]

In 2003, Felton and his brother Chris worked with Joe Babbitt, the St. Lawrence County Angler's Association, the New York State Department of Environmental Conservation Region 6, the Chamber of Commerce, and a diverse group of other organisations to form the World Junior Carp Tournament,[18][26] which involves competitive fishing for ages 11 to 18.[27]