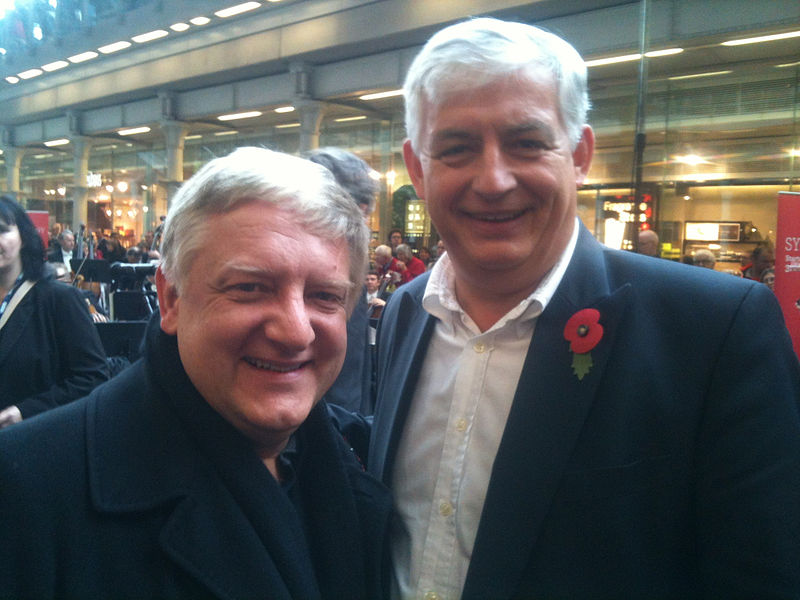 Beale has been described by The Independent as "the greatest stage actor of his generation."[1] He has appeared in Persuasion (1995), The Young Visiters (2003), Dunkirk (2004), The Deep Blue Sea (2011) and as Falstaff in the BBC made-for-television films Henry IV, Part I and Part II (2012). He was part of the main cast of Showtime's Penny Dreadful. More recently, he has appeared in Into the Woods and The Death of Stalin.

Beale was born in Penang, British Malaya, son of Lt-Gen Sir Peter Beale and Julia née Winter, where his father served as an army medic, becoming Surgeon-General of HM Armed Forces.[2] Several members of his family have pursued successful careers in medicine.

It was believed that he gave his first theatre performance at age 14 playing Desdemona in Othello at the independent school Clifton College's Redgrave Theatre. However, Beale has corrected this, stating that his first stage performance was as Hippolyta in A Midsummer Night's Dream at primary school.[3] In the sixth form at Clifton he also performed in Rosencrantz and Guildenstern Are Dead, a play in which he would later star at the National Theatre.

After Clifton, he went to Gonville and Caius College, Cambridge, and obtained a first in English, after which he was offered a place to undertake a PhD. He pursued further studies at Guildhall School of Music and Drama graduating in 1983.

Beale first came to the attention of theatre-goers in the late 1980s with a series of lauded comic performances, that were on occasion extremely camp, in such plays as The Man of Mode by George Etherege and Restoration by Edward Bond at the Royal Shakespeare Company (RSC). He broadened his range in the early 1990s with moving performances as Konstantin in Chekhov's The Seagull, as Oswald in Ibsen's Ghosts, Ferdinand in The Duchess of Malfi and as Edgar in King Lear. At the first annual Ian Charleson Awards in January 1991, he received a special commendation for his 1990 performances of Konstantin in The Seagull, Thersites in Troilus and Cressida, and Edward II in Edward II, all at the RSC.[4]

It was at the RSC that he first worked with Sam Mendes, who directed him there as Thersites in Troilus and Cressida, as Richard III and as a striking Ariel in The Tempest, in the last of which he revealed a fine tenor voice. Mendes also directed him as Iago in Othello at the Royal National Theatre and in Mendes' farewell productions at the Donmar Warehouse in 2002, Chekhov's Uncle Vanya, in which he played the title role, and Twelfth Night, in which Beale played Malvolio. He won the 2003 Laurence Olivier Award for Uncle Vanya.

Since 1995, he has been a regular at the National Theatre, where his roles have included Mosca in Ben Jonson's Volpone opposite Michael Gambon, George in Tom Stoppard's Jumpers and the lead in Humble Boy by Charlotte Jones, a part written specially for him.

In 1997, he played the pivotal role of Kenneth Widmerpool in a television adaptation of Anthony Powell's A Dance to the Music of Time, for which he won the Best Actor award at the British Academy Television Awards in 1998.

In 1999, he was a key part of Trevor Nunn's ensemble, playing in Leonard Bernstein's Candide, Edward Bulwer-Lytton's Money and Maxim Gorky's Summerfolk at the National. In autumn 2006, he played Galileo in David Hare's adaption of Brecht's Life of Galileo and as Face in The Alchemist. From December 2007 to March 2008, he played Benedick in Much Ado About Nothing directed by Nicholas Hytner and from February to July 2008, he played Andrew Undershaft in Hytner's production of Shaw's Major Barbara; he then appeared in Harold Pinter's A Slight Ache and Landscape.

In 2000, he played Hamlet in a production directed by John Caird for the National Theatre, a role for which he was described by The Daily Telegraph as "portly relatively long in the tooth".[5] In 2005, Beale was directed by Deborah Warner as Cassius in Julius Caesar alongside Ralph Fiennes as Antony. That same year, he played the title role in Macbeth at the Almeida Theatre. In 2007, he reprised his 2005 Broadway role as King Arthur in the Monty Python musical Spamalot at the Palace Theatre, London.

In 2008, he made his debut as a television presenter, fronting the BBC series Sacred Music with Harry Christophers and The Sixteen. Various specials and a second series have since been produced; the most recent episode (Monteverdi in Mantua: The Genius of the Vespers) was broadcast in 2015.

In the spring of 2009, Beale and Sam Mendes collaborated on The Winter's Tale and The Cherry Orchard, in which Beale played Leontes and Lopakhin respectively, at the Brooklyn Academy of Music, later transferring to the Old Vic Theatre.[6][7]

From 2009-2010, he played George Smiley in the BBC Radio 4 adaptation of all the John le Carré novels in which Smiley featured. These were aired in nineteen 90-minute or 60-minute full cast radio plays.[8]

From March to June 2010, he played Sir Harcourt Courtly in London Assurance, again at the National. In August 2010 he appeared in the first West End revival of Deathtrap by Ira Levin. In March 2011 he made his debut with The Royal Ballet in Alice's Adventures in Wonderland. In October 2011 he returned to the National to star as Joseph Stalin in the premiere of Collaborators, for which he won Best Actor at the 2012 Evening Standard Awards.

He played the title role in Timon of Athens at the National Theatre from July to October 2012. The production was broadcast to cinemas around the world (as was Collaborators earlier) on 1 November 2012 through the National Theatre Live programme.[10] He starred in a revival of Peter Nichols' Privates on Parade as part of Michael Grandage's new West End season at the Noël Coward Theatre from December 2012 to March 2013.[11]

In 2013, he won the British Academy Television Award (BAFTA) for Best Supporting Actor for his performance as Falstaff in the BBC's The Hollow Crown series of TV films about Shakespeare's historical dramas Richard II; Henry IV, Part 1; Henry IV, Part 2; and Henry V.[12]

He appeared alongside John Simm in Harold Pinter's The Hothouse at the Trafalgar Studios from May to August 2013, directed by Jamie Lloyd.[13]

From January 2014, he played the title role in King Lear at the National Theatre, directed once again by Sam Mendes.[14]

From May to July 2015 he starred in Temple, a new play at the Donmar Warehouse about the 2011 United Kingdom anti-austerity protests.[15] In September and October 2015 he played Samuel Foote in Mr Foote's Other Leg at the Hampstead Theatre.[16] It transferred to the Theatre Royal Haymarket from October 2015 to January 2016.

In 2014 Beale was appointed the Cameron Mackintosh Professor of Contemporary Theatre at Oxford University, based at St Catherine's College.[17]

In November 2016 Beale returned to the Royal Shakespeare Company in Stratford-upon-Avon, to play Prospero in The Tempest.[18] In June 2017 it transferred to the Barbican Centre in London. In July 2018 Beale will return to the National, to star opposite Ben Miles and Adam Godley in The Lehman Trilogy, again directed by Mendes.[19]

Beale is a past president of the Anthony Powell Society,[20] a tribute to his portrayal of Kenneth Widmerpool.[21]

Beale is gay. In the Independent on Sunday 2006 Pink List - a list of the most influential gay men and women in the UK - he was placed at number 30, representing an advance of four positions since the previous year's rankings.[citation needed]

Beale serves as Patron of the following organisations:

Report a problem
Write to Simon Russell Beale at FanPal • 2020