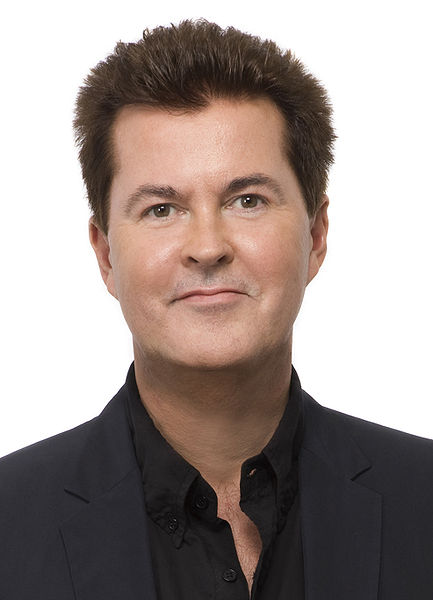 Simon Fuller (born 17 May 1960) is an English entrepreneur, artist manager, film and television producer. He is best known for being the creator of the Idol franchise, which was first seen in the UK under the name Pop Idol, and includes American Idol in the U.S.[1] Fuller is also the executive producer of several shows and films including So You Think You Can Dance, Q'Viva, Spiceworld The Movie, My Generation starring Michael Caine and others.

Fuller was born on 17 May 1960 in Cyprus.[7] He spent some of his childhood in a British Overseas Territory on the island of Cyprus, where his father, a Royal Air Force pilot, had established a school, though later the family moved to Accra, Ghana where his father was the headmaster of the British Military School, Burma Camp. The family moved back to Hastings, East Sussex, where Simon's father became headmaster of the school he attended.[8] He has two brothers, Kim and Mark.

Fuller began his career in 1981 at Chrysalis in A&R (Chrysalis Records) in the UK,[9] where he signed Madonna's first hit 'Holiday' to the company. He started his own management company in London in 1985, 19 Entertainment,[10] eventually selling the business to CKX, Inc. in a cash and stock deal worth over $200 million in March 2005.[11] In 2008 the company delivered a profit of $92.5 million (£66m) into the parent company.[12] Fuller became a director of CKX, a position which gave him creative control over all of CKX's assets including the Elvis Presley Estate, Muhammad Ali's business interests, and other iconic rights properties, until January 2010 when he started a new firm, XIX Entertainment, while continuing to work with CKX/19 as a consultant and executive producer.[13] XIX Entertainment was given a valuation of $100 million and is run from offices in London and Los Angeles.[14][15]

In February 2008 Fuller was presented with the PGA Award by the Producers Guild of America in Hollywood. At the event he was praised for his creativity, entrepreneurship, and charity work by British Prime Minister Gordon Brown and Prince Charles who also thanked Fuller for his support of the Prince's charity The Prince's Trust.[16]

In 2001, Fuller created Pop Idol,[19] a Saturday night prime time TV show that uncovered Will Young whose single Evergreen later became the 'biggest selling single of the century' in the UK.[20] Fuller sold Pop Idol to Fox in the US, and American Idol quickly became a No.1 rated show making stars of its presenter Ryan Seacrest as well as judges Randy Jackson, Paula Abdul and Simon Cowell, as well as many of its performers including Kelly Clarkson, Carrie Underwood and others.[21] And later the show has featured many more high profiled judges including Ellen DeGeneres, Kara DioGuardi, Steven Tyler, Jennifer Lopez, Nicki Minaj, Mariah Carey, and Keith Urban.[22] American Idol has since won many awards and has been credited with originating a new form of reality TV. Fuller has been credited with creating the most valuable TV format in the world with a value of over $8 billion made up of revenue from sponsors, merchandising, telephone, music sales, broadcast and advertising sources. Over 30 million viewers saw David Cook win the seventh season of American Idol in May 2008 and when Fuller re-launched the show in 2011 for its 10th season ratings climbed 20% for the finale event. 122.4 million votes were cast, a record for a reality TV show.[23]

In 2005 Fuller, along with co-creator Nigel Lythgoe, launched So You Think You Can Dance on the Fox network in the USA. The show grew over four seasons to become a regular summer hit. In 2012 Simon Fuller's XIX Entertainment created a new international format with Jennifer Lopez, Marc Anthony and Jamie King named Q'Viva! The Chosen, and described as a celebration of Latin culture that screened in 21 territories reaching over 30 million Spanish speaking TV viewers.[24]

In December 2016 Norwegian state broadcaster NRK announced that it had concluded a deal with Simon Fuller to produce the English language version of the breakout teen drama Skam; Fuller later announced a deal with Facebook to launch SKAM in North America in 2018.[25][26]

In February 2017 Japanese, Indian, German, African and Brazilian news media reported on auditions being staged by Fuller's business XIX for Now United, a real time access global pop group being cast in 14 cities around the world.[27][28]

Simon Fuller has been certified as the most successful British music manager of all time by Billboard magazine,[4] [29] He has managed the career of Annie Lennox since the release of her multi platinum album Diva in 1991. He has managed hit songwriters and producers, most notably Cathy Dennis, who first met Fuller as the singer of D Mob in the 1980s. Under Fuller's guidance Cathy Dennis has become the UK's No. 1 female songwriter with a string of global hits for artists including Kylie Minogue, Britney Spears, Katy Perry, Pink, Will Young and others.[30] In 2002 Fuller's company discovered 19-year-old Amy Winehouse, produced her first award-winning album and signed her to Universal Music. Fuller managed the Spice Girls through the peak of their success and remains in partnership with the five girls today.[31][32] Under Fuller, the Spice Girls rose to chart topper status and went on to sell over 37.5 million records in less than three years.

In 2005, 2006 and 2007 the biggest selling music acts in North America (Kelly Clarkson, Carrie Underwood and Daughtry) were all managed by Simon Fuller.[33]

In October 2016 Simon Fuller announced a joint venture with the 4 original members of the Swedish super group ABBA to involve Mamma Mia 2, new ABBA movie, London ABBA exhibition and the creation of the new digital ABBA.[34]

In 2008 Fuller launched the Victoria Beckham dress collection at New York Fashion Week. Since then Victoria Beckham Limited has grown to become a best selling high-end fashion brand, stocked in 400+ outlets around the world and winning plaudits that include Brand of The Year 2012 and 2014 British Fashion Awards. In 2012 Fuller accompanied Victoria Beckham to launch the business in China.[35]

In February 2012, XIX Entertainment launched a David Beckham bodywear range in 2,500 H&M stores around the world.[36] This was followed in 2015 when Fuller announced a joint venture with Hong Kong-based Global Brands Group Holding Ltd (787) giving Fuller and Beckham ownership of their own apparel business specifically to develop the David Beckham brand and other iconic branded consumer products.[37] The first result of this partnership was the Fall 2016 re-launch of the British heritage menswear label Kent & Curwen, which under Beckham, Fuller and 7 Global ownership currently runs 113 stores in 51 cities worldwide.[38]

In 2009, Fuller took on personal representation of tennis player Andy Murray,[40] guiding him to Grand Slam and Wimbledon wins and later helping the player to establish his own business. In March 2011, Simon Fuller was announced as the manager of British F1 driver Lewis Hamilton[41] and surprised many when he moved Hamilton from McLaren and signed him to a long term contract with the MercedesAMG team. Hamilton won the 2014 F1 World Championship and publicly thanked Fuller,[42] although Hamilton did not renew his deal with Fuller's XIX Entertainment company once it expired at the end of that year.[43] In 2013 it was announced that Fuller was managing 2012 Tour De France winner, Bradley Wiggins, helping him to set up his own pro-cycling team.

In 2014, Fuller and Beckham discussed plan to buy an MLS football team in Miami[44] and later the same year Fuller was revealed as the mastermind behind Beckham's involvement in a new global whisky launch with leading British drinks company Diageo.[45]

Fuller's longterm plan to deliver Beckham's ownership of an MLS team was announced in January 2018 when Miami was confirmed as 25th MLS team.[46]

Simon Fuller has championed many good causes through his working life including The Prince's Trust, Amnesty International, Save the Children, United Nations Foundation, UNICEF, Greenpeace, WWF and Comic Relief. His idea for a philanthropic TV platform Idol Gives Back raised well over $185 million for US and African charities and led to Fuller being honored by UN Secretary General Ban Ki-moon in 2011: "Simon Fuller is an extraordinary leader" he said. "Idol Gives Back is a tremendous initiative in giving Americans a way to save lives around the world".[47]

In 2008 Charles, Prince of Wales, thanked Fuller for his support of The Prince's Trust, stating; "He has been one of the most effective and generous ambassadors for my Trust, which I set up 32 years ago to help the most disadvantaged young people in the United Kingdom. There are many young people in the United Kingdom whose lives have been transformed and, in some cases, saved - literally - thanks to the contribution which Simon has made.".[16] In 2009, Simon Fuller founded Malaria No More UK in London, donating resources and funds to allow the charity to lead the fight against malaria. Fuller remains a passionate ambassador for the cause and has shared his own experience of malaria with the charity.

He married his long-term girlfriend Natalie Swanston in May 2008, and they have three children.

He has a portfolio of real estate including properties in Europe, North America and South America. In 2014, Fuller was awarded an honorary degree by the University of Brighton.[48]

Report a problem
Write to Simon Fuller at FanPal • 2020