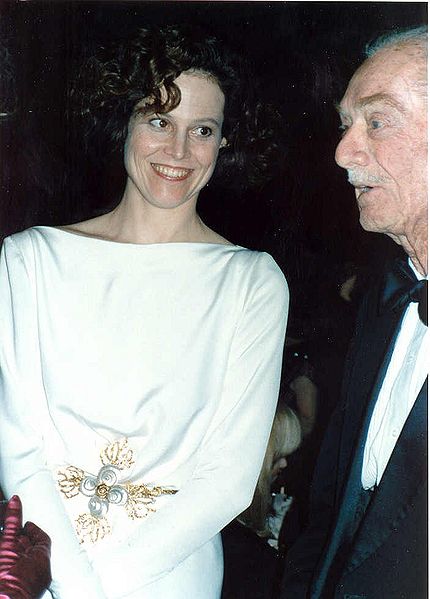 Weaver was nominated for a Drama Desk Award for the 1980 Off-Broadway play Das Lusitania Songspiel, and received a Tony Award nomination for the 1984 Broadway play Hurlyburly. A seven-time Golden Globe Award nominee, she won both Best Actress in Drama and Best Supporting Actress for her work in the films Gorillas in the Mist and Working Girl (both in 1988), becoming the first person to win two acting Golden Globes in the same year.[2] She also received Academy Award nominations for both films.

For her role in the film The Ice Storm (1997), she won the BAFTA Award for Best Actress in a Supporting Role. Additionally, she has received three Emmy Award nominations and won two Saturn Awards.

Weaver was born in Manhattan, New York City, the only daughter of Elizabeth Inglis (née Desiree Mary Lucy Hawkins; 1913-2007), an actress, and NBC television executive and television pioneer Sylvester "Pat" Weaver (1908-2002).[6][7][8] Her uncle, Doodles Weaver (1911-1983), was a comedian and actor. Her mother was English, from Colchester, Essex, and her father, who was American, had English, Scottish, Scots-Irish, and Dutch ancestry, including roots in New England.[9][10] Weaver began using the name "Sigourney Weaver" in 1963 after a minor character (Mrs. Sigourney Howard, Jordan Baker's aunt) in Chapter 3[11] of F. Scott Fitzgerald's novel The Great Gatsby.[12]

Weaver attended the Ethel Walker School, a girls' preparatory school in Simsbury, Connecticut. She also attended The Chapin School and The Brearley School. Sigourney was reportedly 5 ft 10 1⁄2 in (179 cm) tall by the age of 14, although she only grew another inch during her teens to her adult height of 5 ft 11 1⁄2 in (182 cm). In 1967, at the age of 18, Weaver visited Israel and volunteered on a kibbutz for several months.[13]

Weaver attended Sarah Lawrence College. In 1972, she graduated with a B.A. in English from Stanford University,[14][15] where she first began her involvement in acting by living in Stanford's co-ed Beta Chi Community for the Performing Arts.[16] Weaver earned her Master of Fine Arts degree at the Yale University School of Drama in 1974,[17] where one of her appearances was in the chorus in a production of Stephen Sondheim's musical version of The Frogs, and another was as one of a mob of Roman soldiers alongside Meryl Streep in another production.[18] Weaver later acted in original plays by her friend and classmate Christopher Durang. She later appeared in an "Off-Broadway" production of Durang's comedy Beyond Therapy in 1981, which was directed by the up-and-coming director Jerry Zaks.[19]

Weaver with her father Pat Weaver at the 1989 Academy Awards

Weaver's first role is often said to be in Woody Allen's comedy Annie Hall (1977) playing a non speaking role opposite Allen.[20] Weaver appeared two years later as Warrant Officer / Lieutenant Ellen Ripley in Ridley Scott's blockbuster film Alien (1979), in a role initially designated to co-star British-born actress, Veronica Cartwright, until a late change in casting. Cartwright stated to World Entertainment News Network (WENN) that she was in England ready to start work on Alien when she discovered that she would be playing the navigator Lambert in the project, and Weaver had been given the lead role of Ripley.[21]

She reprised the role in the three sequels of the Alien movie franchise, Aliens, Alien 3 and Alien Resurrection. Ty Burr of The Boston Globe states, "One of the real pleasures of Alien is to watch the emergence of both Ellen Ripley as a character and Sigourney Weaver as a star."[22]

In the sequel Aliens directed by James Cameron, critic Roger Ebert wrote, "Weaver, who is onscreen almost all the time, comes through with a very strong, sympathetic performance: She's the thread that holds everything together."[23] She followed the success of Alien appearing opposite Mel Gibson in The Year of Living Dangerously released to critical acclaim and as Dana Barrett in Ghostbusters and Ghostbusters II.

Weaver at the 2008 Tribeca Film Festival premiere of Baby Mama, in which she appears.

By the end of the decade, Weaver appeared in two of her most memorable and critically acclaimed performances. In 1988, she starred as Dian Fossey in Gorillas in the Mist. The same year, she appeared opposite Harrison Ford in a supporting role as Katharine Parker in the film Working Girl. Weaver won Golden Globe Awards for Best Actress and Best Supporting Actress for her two roles that year. She received two Academy Award nominations in 1988, for Best Supporting Actress for her role in Working Girl and Best Actress for Gorillas in the Mist.[24]

She gave birth to her daughter Charlotte Simpson (born on April 13, 1990) taking a few years' break from the movie business and focusing on her family. She returned to the big screen with Alien 3 (1992) and Ridley's Scott's 1492: Conquest of Paradise (1992) in which she played the role of Queen Isabella. In the early 1990s, Weaver appeared in several films including Dave opposite Kevin Kline and Frank Langella. In 1994, she starred in Roman Polanski's drama Death and the Maiden as Paulina Escobar.[25] She played the role of agoraphobic criminal psychologist Helen Hudson in the movie Copycat (1995).[26]

Throughpout the 1990s decade, Weaver also concentrated on smaller and supporting roles such as Jeffrey (1994) with Nathan Lane and Patrick Stewart.[27] In 1997, she appeared in Ang Lee's The Ice Storm.[28] Her role in The Ice Storm as Janey Carver, earned her her another Golden Globe nomination for Best Supporting Actress (1997), and won her a BAFTA Award for Actress in a Supporting Role.[29][30] In 1999, she appeared in Galaxy Quest.[31] Also in 1999, she apperared in A Map of the World, earning her another Golden Globe nomination for Best Actress.[29]

In 2001, Weaver appeared in the comedy Heartbreakers playing the lead role of a con-artist alongside Jennifer Love Hewitt, Ray Liotta, Gene Hackman and Anne Bancroft. She appeared in several films throughout the decade including Holes (2003), the M. Night Shyamalan horror film The Village (2004), Vantage Point (2008), and Baby Mama (2008).

In 2007, Weaver returned to Rwanda for the BBC special Gorillas Revisited, in which Weaver reunites with the Rwandan apes from the film Gorillas in the Mist, some 20 years later.[33]

In 2009, Weaver starred as Mary Griffith in her first made-for-TV movie, Prayers for Bobby, for which she was nominated for an Emmy Award,[34] Golden Globe Award, and Screen Actors Guild Award. She also made a rare guest appearance on television playing herself in season 2 episode of the television series Eli Stone in the fall of 2008.[35] She reunited with Aliens director James Cameron for his film Avatar (2009), with Weaver playing a major role as Dr. Grace Augustine, leader of the AVTR (avatar) program on the film's fictional moon Pandora.[36][37]

Weaver has done voice work in various television series and in animated feature films. In February 2002, she featured as a guest role in the Futurama episode "Love and Rocket", playing the female Planet Express Ship.[38] In 2006, she was the narrator for the American version of the BBC Emmy Award-winning nature documentary series Planet Earth, with the original British series version was narrated by David Attenborough.[39] In 2008, Weaver was featured as the voice of the ship's computer in the Pixar and Disney release, WALL•E.[40][41] In 2008, she voiced a narrating role in the computer-animated film, The Tale of Despereaux (2008), based on the novel by Kate DiCamillo. The film opens with Weaver as narrator recounting the story of the pastel-hued Kingdom of Dor.[42]

Weaver has hosted two episodes of the long-running NBC sketch show Saturday Night Live: once on the 12th-season premiere in 1986, and again, on a season 35 episode in January 2010. In March 2010, she was cast for the lead role as Queen of the Vampires in Amy Heckerling's Vamps.[43] She was honored at the 2010 Scream Awards earning The Heroine Award which honored her work in science fiction, horror and fantasy films.[44]

In May 2010, there were reports that Weaver had been cast for the lead role Margaret Matheson in the Spanish thriller film Red Lights.[45]

In September 2011, it was confirmed that Weaver will be returning to Avatar 2, with James Cameron stating that "no one ever dies in science fiction."[46] In 2014, he revealed that she would be featured in all three sequels.[47]

In 2014, Weaver reprised the role of Ripley for the first time in 17 years by voicing the character in the video game Alien: Isolation. Her character has a voice cameo in the main story, and has a central role in the two DLCs set during the events of Alien, with most of the original cast voicing their respective characters.[48][49]

In 2015, she co-starred in Neill Blomkamp's science-fiction film Chappie, and stated that she would agree to appear in an Alien sequel, provided that Blomkamp directs.[51] On February 18, 2015, it was officially announced that an Alien sequel will be made, with Blomkamp slated to direct.[52] On February 25, 2015, Weaver confirmed that she would reprise her role as Ellen Ripley in the new Alien film.[53] On January 21, 2017, in response to a fan question on Twitter asking what the chances were of his Alien project actually happening, Blomkamp responded "slim".[54][55]

Principal photography for Avatar 2 and Avatar 3 started on September 25, 2017, with Weaver returning; however, she stated that she would portray a different, currently unknown character.[56][57][58] She had to learn both free-diving and scuba diving for the film.[59]

After making Gorillas in the Mist, she became a supporter of the Dian Fossey Gorilla Fund and is now its honorary chairwoman.[62] She was honored by the Explorers Club for this work. Weaver is considered to be an environmentalist.[63]

In October 2006, she drew international attention through a news conference at the start of a United Nations General Assembly policy deliberation. She outlined the widespread threat to ocean habitats posed by deep-sea trawling, an industrial method for catching fish.[64]

On April 8, 2008, she hosted the annual gala of the Trickle Up Program, a non-profit organization focusing on those in extreme poverty, mainly women and disabled people, in the Rainbow Room.[65]

She is a longtime friend of Jamie Lee Curtis, with whom she starred in the romantic comedy You Again (2010). In a 2015 interview together, Curtis admitted to Weaver that she never saw Alien in its entirety because she was too scared.[20] In 2017, Weaver made a cameo in English television series Doc Martin, she revealed that the reason behind her appearance was because of her 40-year friendship with Doc Martin star Selina Cadell.[66]

Weaver has been nominated three times for an Academy Award, three BAFTA Awards (one win) and seven Golden Globe Awards (two wins). She has also earned Tony Award and Drama Desk Award nominations for her work on the stage.