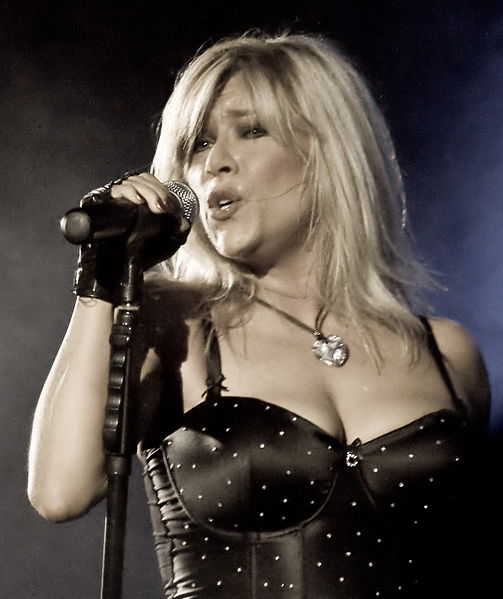 Samantha Karen Fox (born 15 April 1966)[1] is an English singer, songwriter, actress, and former glamour model. In 1983, at age 16, she began appearing as a topless model on Page 3 of British tabloid newspaper The Sun, and continued as a Page 3 girl until 1986. During this time, she became the most popular pin-up girl of her era, as well as one of the most photographed British women of the 1980s.

In 1986, she launched her pop music career with her debut single "Touch Me (I Want Your Body)", which peaked at #1 in 17 countries. In 1988, Fox received a Brit Award nomination for Best British Female Artist.[3] She has also appeared in a number of films and reality television shows, and has occasionally worked as a television presenter.

Samantha Fox is the eldest daughter of actress Carole Ann Wilken and John Patrick Fox. She has a younger sister, Vanessa, and two half-siblings from her father's second marriage, Frederica and Frankie.[4] Fox comes from a family of market traders.

Fox attended St Thomas More Catholic School, Wood Green and took an interest in the theatre from an early age. She first appeared on a theatre stage at age 3, and was enrolled in the Anna Scher Theatre School from age 15.[5] The next year she got her first record deal, with Lamborghini Records.[6]

In 1983, when Fox was 16, her mother submitted several photographs that she had taken of her daughter in lingerie to The Sunday People newspaper's Girl of the Year amateur modelling contest.[5][7] She came in second place out of 20,000 entrants and the photographs drew her to the attention of the newspaper The Sun, which invited her to pose for Page 3.[5][7]

Her parents gave their consent for her to pose topless, and her first Page 3 photograph appeared in the Sun on 22 February 1983.[8] She signed a four-year Page 3 modelling contract with the Sun,[9] and won its "Page 3 Girl of the Year" award for three consecutive years between 1984 and 1986.[10] She is recognized today as the most popular pin-up girl of her era, as well as one of the most-photographed British women of the 1980s.[11]

In 1986, Fox retired from Page 3 modelling, at the age of 20, and transitioned into a career in pop music. In 1995, aged 29, she made a one-off appearance in The Sun to promote Page 3's 25th anniversary. After receiving an overwhelmingly positive reader response, she appeared in the slot every day of that week, with Friday's final topless picture given away as an A3-sized poster. The following year, she appeared in the October issue of Playboy magazine.[12]

In December 2009, her latest compilation album was issued, Greatest Hits, both in single CD and double CD formats.[13] In 2012 her first 4 albums were-re-issued as double deluxe CDs by Cherry Red.

In 1990, she appeared on the American sitcom Charles in Charge as Samantha Steele, a fictional rock star whose agent pushes her to romance Charles (Scott Baio) so the paparazzi will print it in the tabloids. She also featured in two films: It's Been Real, written and directed by Steve Varnom and starring John Altman; and The Match, written and directed by Mick Davis and starring Richard E. Grant, Ian Holm and Tom Sizemore.

In 1995, under the group name 'Sox', Fox took part in A Song for Europe, the UK heat for the Eurovision Song Contest 1995. Her song Go for the Heart finished fourth of the eight shortlisted entries with 65,436 telephone votes and the single went on to reach No. 47 on the UK Singles Chart.[15]

In 2008, Fox and her partner Myra Stratton took part in Celebrity Wife Swap, exchanging with Freddie Starr and his wife Donna. In November 2009, she took part in ITV's I'm a Celebrity...Get Me Out of Here!; she was voted out on day 16. In 2010, she appeared in a celebrity episode of Come Dine with Me with Calum Best, Janice Dickinson, and Jeff Brazier. In 2016, Fox became a participant in Celebrity Big Brother 18, where she just missed out on reaching the final and finished in seventh place.

Fox (left) and her partner Myra Stratton at the 2010 Fate Awards in Belfast, Northern Ireland

Fox's father Patrick, a former carpenter, managed her career until 1991, when she hired accountants to trace over £1 million (£2.0 million today) that she believed he had embezzled from her accounts. She sued her father, who by then had divorced and remarried, and in May 1995, she was awarded a £363,000 (£0.6 million today) court settlement.[16] Patrick Fox died in 2000, at which time they had not spoken for almost a decade.

In 1994, it was reported that Fox had become a born-again Christian;[17] that year she played at the Christian arts festival Greenbelt.[18]

In the late 1980s, Fox became romantically linked with Australian career criminal Peter Foster. They began dating, but she turned down his marriage proposal.[19] She also had a relationship with Paul Stanley, rhythm guitarist and singer of the rock band Kiss.[20][21] Rumours regarding Fox's sexual orientation began to surface in 1999 when she judged a lesbian beauty pageant, and rumours circulated that the woman with whom she resided, Cris Bonacci, the Australian former lead guitarist for the rock band Girlschool, was her lover. The relationship was confirmed later by Bonacci in an interview.[22]

In 2003, Fox made a statement about her personal life:[23][24] "I have slept with other women but I've not been in love before Myra Stratton. People say I'm gay.... I don't know what I am. All I know is that I'm in love with Myra . I love her completely and want to spend the rest of my life with her." Fox said that she had been reluctant to come out because, having already dealt with obsessed fans and stalkers, she feared fans' possible reactions.[25] In 2009, she announced her plans to form a civil partnership with Stratton.[26] In 2015, Stratton died of cancer.[27] She was 60 years old.

In 2011, Fox appeared as part of a campaign for LGBT charity the Albert Kennedy Trust.[29]