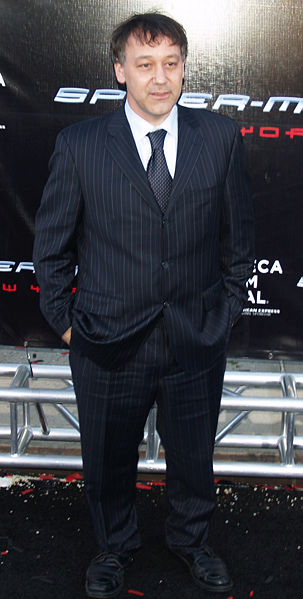 Raimi was born in Royal Oak, Michigan, to a Conservative Jewish family. His ancestors were Jewish immigrants from Russia and Hungary.[2][3][4] He is the older brother of actor Ted Raimi and the younger brother of screenwriter Ivan Raimi. His sister is Andrea Raimi Rubin.[5] Another older brother, Sander Raimi, died at 15 in an accidental drowning; Sam Raimi has said that the trauma knitted the remaining family closer together and "colour everything for the rest of life."[6]

The fourth of five children born to Celia Barbara (née Abrams) and Leonard Ronald Raimi, Raimi grew up in Franklin, Michigan.[7][8] He graduated from Groves High School[9] and later went on to attend Michigan State University, where he majored in English but left after three semesters to film The Evil Dead.[10]

Raimi became fascinated with making films when his father brought a movie camera home one day and he began to make Super 8 movies with his friend Bruce Campbell who he befriended in the year 1975, Bruce Campbell would have been around 17 years old and Sam Raimi would have been around 16. In college, he teamed up with his brother's roommate Robert Tapert and Campbell to shoot Within the Woods (1978), a 32-minute horror film which raised $375,000, as well as his debut feature film It's Murder!. Through family, friends, and a network of investors, Raimi was able to finance production of the highly successful horror film The Evil Dead (1981) which became a cult hit and effectively launched Raimi's career.

He began work on his third film Crimewave (1985), intended as a live-action comic book—the film was not successful, due in part to unwanted studio intervention. Raimi then returned to the horror genre with the seminal Evil Dead II (which added slapstick humor to the over the top horror, showcasing his love of the Three Stooges). With his brother Ivan Raimi (and crediting himself as Celia Abrams), Sam Raimi also wrote Easy Wheels (1989), a parody of the Outlaw biker film genre. A long-time comic book buff, he then attempted to adapt "The Shadow" into a movie, but was unable to secure the rights, so he created his own super-hero, Darkman (1990). The film was his first major studio picture, and while it was only moderately successful, it spawned two sequels. Through it he was still able to secure funding for Evil Dead III, which was retitled Army of Darkness and turned away almost totally from horror in favor of fantasy and comedy elements. Army of Darkness, the final movie in the Evil Dead trilogy, was a box office flop, yet on video became a cult classic.

In the 1990s, Raimi moved into other genres, directing such films as the western The Quick and the Dead (starring Sharon Stone and Gene Hackman), the critically acclaimed crime thriller A Simple Plan (1998) (starring Bill Paxton and Billy Bob Thornton), and the romantic drama For Love of the Game (1999) (starring Kevin Costner). Prior to directing the Spider-Man films, Raimi lobbied to direct Batman Forever when Tim Burton was ousted from the director's chair, but was rejected in favor of Joel Schumacher, whose reputation at the time outshone Raimi's.[11]

Raimi achieved great critical and commercial success with the blockbuster Spider-Man (2002), which was adapted from the comic book series of the same name. The movie has grossed over US$800 million worldwide, spawning two sequels: Spider-Man 2 and Spider-Man 3, both directed by Raimi and each grossing roughly $800 million. After the completion of the third Spider-Man film, he planned on producing two more sequels (although Sony Pictures planned three sequels) but could not find a satisfactory script.

Raimi frequently collaborates with Joel and Ethan Coen, beginning when Joel was one of the editors of Evil Dead. The Coens co-wrote Crimewave and The Hudsucker Proxy with Raimi in the mid-1980s (though Hudsucker was not produced for almost a decade). Raimi made cameo appearances in Miller's Crossing, The Hudsucker Proxy, and with Joel Coen in Spies Like Us. The Coen brothers gave Raimi advice on shooting in snow for A Simple Plan, based on their experiences with Fargo.[citation needed]

He worked in front of the camera in The Stand as a dimwitted hitman, John Carpenter's Body Bags as a gas station attendant, and Indian Summer in what is perhaps his biggest role as a bumbling assistant to Alan Arkin. The film was written by his childhood friend writer-director Mike Binder and shot at the camp that they both attended when they were younger. Raimi also produced the entire The Grudge franchise.[citation needed]

According to Entertainment Weekly, Raimi had expressed an interest in directing a film version of The Hobbit, the prequel to the Lord of the Rings trilogy.[12] In 2008, Guillermo del Toro was selected as the director, with Peter Jackson as the executive producer. Raimi may direct By Any Means Necessary, the next film based on the "Jack Ryan" CIA character created by Tom Clancy for Paramount Pictures. Disney also approached him to direct W.I.T.C.H.: The Movie, based on the popular comic.

Blizzard Entertainment announced on July 22, 2009 that Sam Raimi will be directing a Warcraft film.[13] However at Comic-Con International 2012, it was revealed that he would not be the one directing the World of Warcraft adaptation.[14]

Raimi directed Oz the Great and Powerful, which was released on March 8, 2013 by Walt Disney Pictures.[18] He said he would not be directing the planned sequel.[19][20]

On December 11, 2006, the website SuperHero Hype reported that director Sam Raimi and Michael Uslan would co-produce a new film version of The Shadow for Columbia Pictures. On October 16, 2007, Raimi stated that: "I don't have any news on 'The Shadow' at this time, except that the company that I have with Josh Donen, my producing partner, we've got the rights to 'The Shadow.' I love the character very much and we're trying to work on a story that'll do justice to the character."[21][citation needed]

Raimi, along with Bruce Campbell and Rob Tapert, produced the remake of Raimi's The Evil Dead. First-time feature filmmaker Fede Alvarez wrote and directed, and Diablo Cody was also brought in to revise/rewrite the script.[22] Raimi confirmed plans to write Evil Dead 4 with his brother; it was later specified that this film would be Army of Darkness 2.[23] Alvarez revealed that Raimi would direct the sequel to Army of Darkness.[24] However, in an interview with Erin Darling,[who?] Bruce Campbell announced that Army of Darkness 2 is not happening, saying "It's all internet b.s. There's no reality whatsoever. These random comments slip out of either my mouth, or Sam Raimi's mouth, next thing you know, we're making a sequel."[25]

On February 26, 2016, it was confirmed that Raimi is attached to direct the upcoming film World War 3 for Warner Bros. The film will be based on a possible future inspired by the book The Next 100 Years by George Friedman.[26]

On February 16, 2017, it was reported that Raimi will be directing a thriller about the Bermuda Triangle for Skydance Media, with the script being written by Doug Miro and Carlo Bernard.[27]

In addition to film, Raimi has worked in television, producing such series as Hercules: The Legendary Journeys and its spin-off Xena: Warrior Princess, both featuring his younger brother Ted Raimi and long-time friend Bruce Campbell, American Gothic, Cleopatra 2525, M.A.N.T.I.S., 13: Fear Is Real, Young Hercules, and Jack of All Trades. In 2008, Raimi executive produced a syndicated TV series called Legend of the Seeker, based on Terry Goodkind's best-selling The Sword of Truth fantasy series. He is also the executive producer of Starz original television series Spartacus: Blood and Sand and Spartacus: Gods of the Arena,[28] Spartacus: Vengeance and Spartacus: War of the Damned. He directed the pilot episode of Ash vs Evil Dead for Starz.[29]

Raimi's brother Ted Raimi and his friend Bruce Campbell often appear in on-screen roles in his film and television projects, although some of the appearances are just cameos. The trio have been working together since their college days. Both Ted and Bruce have appeared in all three Evil Dead and Spider-Man movies, as well as Hercules: The Legendary Journeys and Xena: Warrior Princess, which Sam produced. In the Evil Dead films, Campbell plays the recurring lead part of Ash, while Ted played various small parts in each film.

In the Spider-Man films Ted played the featured role of Daily Bugle advertising manager Ted Hoffman, while Bruce Campbell played different roles in each Spider-Man film. In Hercules and Xena, Ted and Bruce played the recurring roles of Joxer and Autolycus respectively. Raimi occasionally appears on-screen in his movies, usually in similar fashion to the cameos made by his idol Alfred Hitchcock: In Spider-Man in the wrestling scene as a silhouette behind a projection screen; in Spider-Man 2 as a passing student whose bookbag hits Peter Parker in the back of the head; as a hitchhiking fisherman accompanied by Robert Tapert in The Evil Dead. Raimi also wears a suit with white shirt and tie on-set in another homage to Hitchcock. An adept fan will also notice Raimi's recurring usage of soda crackers as a back prop.

Raimi often works with film editor Bob Murawski, a fellow Michigan State University alumnus. Among Raimi's films edited by Murawski include the Spider-Man movies, The Gift, and Army of Darkness. Raimi also frequently collaborates with composer Joseph LoDuca, another acquaintance from Michigan who has provided the scores to most of his films.

Raimi has included his old car from his college days, a 1973 yellow Oldsmobile Delta 88 automobile (nicknamed "The Classic"), in every film including The Quick and the Dead ("Somewhere...somewhere hidden. Only I know. I'll never tell"). At Comic-con 2005 Bruce Campbell revealed that a special covered wagon frame had covered the Oldsmobile to maintain the motif of the film. The yellow Oldsmobile also appeared in Drag Me to Hell, driven by the elderly gypsy woman. A bottle of Maker's Mark also appears regularly in his movies. The Classic does not appear in the final cut of For Love of the Game, however. The scene in which it appeared was removed during the editing process.[citation needed]

Other Raimi visual trademarks include:

In the Making The Amazing documentary on the Spider-Man 2 DVD, both Tobey Maguire and Bruce Campbell humorously describe Raimi's penchant for "abusing" actors. To obtain detailed closeups of a character getting hit by debris Raimi stands off-camera throwing items, swinging tree branches, etc., at the actor at the center of the shot. Scenes from the documentary show that Raimi is the one throwing popcorn at Peter Parker during the walk to the wrestling ring in Spider-Man and tossing gold coins around during the bank robbery scene in Spider-Man 2, as well as a passer-by banging their bag into Peter Parker's head as he kneels on the sidewalk of his college's campus being Sam Raimi.

In many of Raimi's movies the camera itself is part of the action onscreen. One of Raimi's most famous sequences involves a point-of-view shot of actor Bruce Campbell being chased through a cabin by an unseen evil force.

Raimi has been married since 1993 to Gillian Dania Greene, daughter of actor Lorne Greene. They have five children, three of whom (daughter Emma Rose and sons Lorne and Henry) appeared as extras in Drag Me to Hell, and in Spider-Man 3 during the movie's final battle.[citation needed]