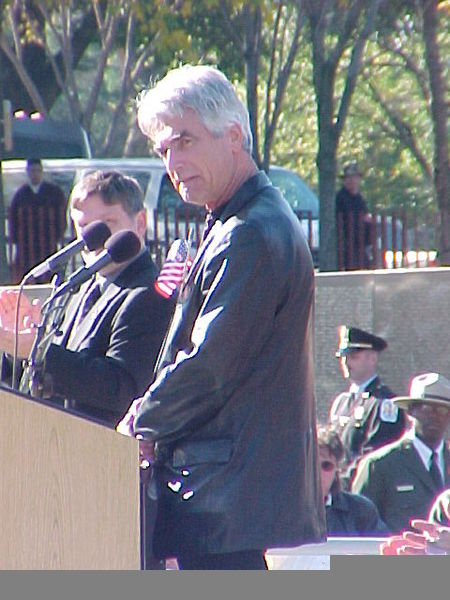 Samuel Pack Elliott (born August 9, 1944) is an American actor. His lanky physique, thick moustache, deep and resonant voice, and Western drawl have led to frequent roles as cowboys and ranchers.[1] His credits include playing Wade Garrett in Road House (1989), The Stranger in The Big Lebowski (1998), Gar in Mask (1985), General John Buford in Gettysburg (1993), Virgil Earp in Tombstone (1993), Command Sergeant Major Basil L. Plumley in We Were Soldiers (2002), and Marvel Comics characters Thunderbolt Ross in Hulk (2003) and The Caretaker in Ghost Rider (2007). In 2018, Elliot received critical acclaim for his performance as Bobby Maine in the remake of A Star Is Born.

Elliott was born in Sacramento, California,[2] to a mother who was a physical training instructor and a father who worked for the Department of the Interior.[3] He moved to Portland, Oregon, with his family during his teenage years, graduating from David Douglas High School. He attended Clark College in Vancouver, Washington, where he completed a two-year program and was cast as one of the leads in Guys and Dolls. The Vancouver Columbian newspaper suggested that Elliott should be a professional actor. Soon after, Elliott declared he was going to Hollywood to become a star.

Elliott is a member of the Sigma Alpha Epsilon fraternity at California State University, Los Angeles. He worked in construction while studying acting and served in the California Air National Guard's 163rd Airlift Wing, based on the Channel Islands.[4] He also lived for a short time in Princeton, West Virginia.[5] He has said that he has heritage from the West, specifically the state of Texas, with a relative who was in the Battle of the Alamo.[1]

Elliott began his career as a character actor; his appearance, voice, and bearing were well-suited to Westerns. In 1969, he earned his first television credit as Dan Kenyon in Judd for the Defense in the episode "The Crystal Maze".[6]

That same year he appeared in the show Lancer in the episode "Death Bait", playing Renslo. Also in this episode was Tom Selleck, his future co-star in a number of TV Western movies, who was making his acting debut. Selleck played Dobie. The two had no scenes together. In 1979, the two actors played brothers in the popular adaptation of Louis L'amour's The Sacketts. Elliot played the oldest brother in the made-for-TV miniseries. [7] [8] Elliot and Selleck teamed again in 1982 in The Shadow Riders, another Louis L'amor adaption.[9]

One of his early roles was as a card player in Butch Cassidy and the Sundance Kid (1969). In the 1970-1971 television season, Elliott starred as Doug Robert for 13 episodes in the hit series Mission: Impossible. In 1976-77, he played the lead character Sam Damon in the miniseries Once an Eagle.

He played Tom Keating in the mini-series Aspen in 1977. He had the starring role as Rick Carlson in the summer sleeper hit Lifeguard (1976). He later played a wife killer in the miniseries Murder in Texas (1981) with his future wife Katherine Ross.[10], and starred with Cheryl Ladd in A Death in California (1985).[11]

Elliott's breakthrough came with his supporting role in Mask (1985). He has made guest appearances on shows such as Felony Squad, Gunsmoke, Lancer, and Hawaii Five-O, and has been featured in many TV movies, including Prancer (1989) and Buffalo Girls (1995), in which he played Wild Bill Hickok.

In 1986, he starred in TV movie Gone to Texas, based on a biography of Sam Houston. The role allowed him to play Houston as both fighter and a man who grew into a skillful political leader; the film depicted his disgrace as governor of Tennessee, his return to his Cherokee Nation friends, and his pivotal role in the liberation of Texas from Mexico in 1836. Elliott played Wade Garrett in Road House (1989) and Virgil Earp in Tombstone (1993). In 1991, Elliott and his wife Katharine Ross starred in the adaptation of the Louis L'Amour novel Conagher (1991).[12]

In 1998, Elliot was named the grand marshal of the Calgary Stampede parade and rode in the procession before an estimated 300,000 spectators.[13] He co-starred in We Were Soldiers, an adaptation of We Were Soldiers Once… And Young. He portrayed Basil L. Plumley.

He portrayed General John Buford in the 1993 film Gettysburg. Elliott played The Stranger, a character narrating the story of The Big Lebowski (1998). He played General Thunderbolt Ross in the 2003 film Hulk. In 2005, he appeared in Thank You for Smoking as a former Marlboro Man advertisement cowboy who has developed lung cancer.

The same year, Elliott appeared in The Golden Compass as the character Lee Scoresby. The film is based on Northern Lights in Philip Pullman's trilogy His Dark Materials. Also appearing in the film are Nicole Kidman, Christopher Lee and Daniel Craig.

In 2009, Elliott had a small role in Up In The Air in which he portrayed the chief pilot of American Airlines. He has appeared three times on Parks and Recreation as Ron Dunn, the Eagleton equivalent of Ron Swanson; Dunn is a hippie, compared to Swanson's staunch survivalist and Libertarian personality. He had a supporting role in the film The Company You Keep and played a college football coach in 2014's Draft Day.

In 2015, Elliott played Karl in Paul Weitz's film Grandma,[14] appeared in the romance I'll See You in My Dreams, and had a role in the independent film Digging for Fire.[15] In 2015, he won the Critics' Choice Television Award for best guest performer in a drama for his role in the FX Network's show Justified.[15]

In 2015, Elliot appeared in the Netflix series The Ranch.[16] He also had a recurring role as Phil Millstein in the second season of Grace and Frankie.

In 2017, Elliott appeared in The Man Who Killed Hitler and Then the Bigfoot.[17]

Elliott has performed voice-over narration for various commercials. He has lent his voice to campaigns for Dodge, IBM, Kinney Drugs, Union Pacific, and, most notably, the American Beef Council, succeeding Robert Mitchum in the latter. Since late 2007, Elliott has done voice-overs for Coors beer, bringing his deep, rich voice and "western" appeal to the brand brewed in Colorado. In 2010, Ram Trucks hired Elliott to do the voice-over for their Ram Heavy Duty truck commercial; he has been voicing their commercials since. Starting in 2008, he has voiced Smokey Bear, and shares the mascot's birth date (August 9, 1944). For animated films, Elliott lent his voice to Ben the Cow in Barnyard, Buster (a.k.a. Chupadogra) in Marmaduke, and Butch in The Good Dinosaur. He also narrated the Pittsburgh Steelers and Green Bay Packers team introductions to Super Bowl XLV, played at Cowboys Stadium in Arlington, Texas at the conclusion of the 2010 NFL season for NFL on Fox.

Elliott married actress Katharine Ross in 1984. Ross starred in Butch Cassidy and the Sundance Kid, in which Elliott had a very small role (though no scenes with Ross) in 1969, but the two did not meet again and begin dating until 1978, when they both starred in The Legacy. They have a daughter, Cleo Rose Elliott (born September 17, 1984),[18][19] who is now a musician in Malibu, California.[20][21] Ross and Elliott live on their ranch in Malibu.[19]

Report a problem
Write to Sam Elliott at FanPal • 2020