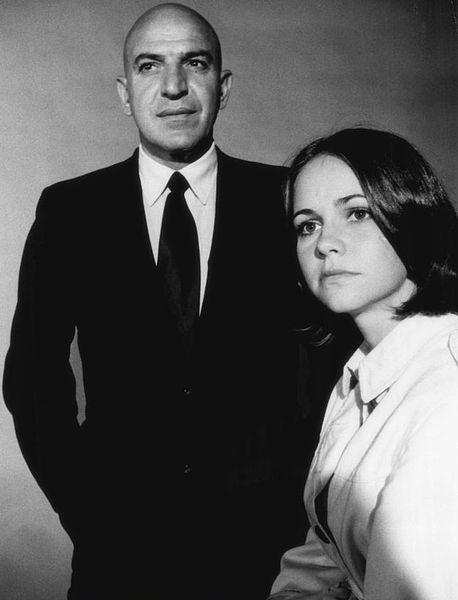 Sally Margaret Field (born November 6, 1946) is an American actress and director. She is the recipient of various accolades, including two Academy Awards, three Primetime Emmy Awards, two Golden Globe Awards, a Screen Actors Guild Award and has been nominated for a Tony Award and two BAFTA Awards.

Field began her professional career on television, starring in titular roles on the short-lived sitcoms Gidget (1965-1966), The Flying Nun (1967-1970), and The Girl with Something Extra (1973-1974). In 1976, her career saw a turning point when she garnered critical acclaim of her portrayal of a woman suffering from multiple personality disorder in the television miniseries Sybil, for which she received the Primetime Emmy Award for Outstanding Lead Actress in a Limited Series or Movie. Although her film debut was as an extra in Moon Pilot (1962), her film career escalated during the 1970s with starring roles in successful films including Stay Hungry (1976), Smokey and the Bandit (1977), Heroes (1977), The End (1978), and Hooper (1978). Her career further expanded during the 1980s, twice receiving the Academy Award for Best Actress for Norma Rae (1979) and Places in the Heart (1984), and continued to appear in a wide range of acclaimed and successful films including Smokey and the Bandit II (1980), Absence of Malice (1981), Kiss Me Goodbye (1982), Murphy's Romance (1985), Steel Magnolias (1989), Mrs. Doubtfire (1993), and Forrest Gump (1994).

As a director, Field is known for the television film The Christmas Tree (1996), an episode of the 1998 HBO miniseries From the Earth to the Moon, as well as the feature film Beautiful (2000). In 2014, she was presented with a star on the Hollywood Walk of Fame.

Sally Field was born in Pasadena, California, to Margaret Field (née Morlan; an actress) and Richard Dryden Field. Her father was an army officer.[1] Following her parents' 1950 divorce, her mother married actor and stuntman Jock Mahoney. Field alleged in her 2018 memoir that she was sexually abused by Mahoney during her childhood.[2][3] Through her maternal grandmother's genealogical line, Field is a descendant of Mayflower passenger and colonial governor William Bradford, her tenth great-grandfather.[4][5][6]

Field with Joanne Woodward in Sybil (1976)

Field got her start on television as the boy-crazy surfer girl in the sitcom Gidget (1965-1966). The show was not an initial success and was canceled after a single season; however, summer reruns garnered respectable ratings, making the show a belated success. Wanting to find a new starring vehicle for Field, ABC next produced The Flying Nun with Field cast as Sister Bertrille for three seasons, from 1967 to 1970.[7] In an interview included on the Season One DVD release, Field said that she thoroughly enjoyed Gidget, but hated The Flying Nun because she was not treated with respect by the show's directors. Field was then typecast, finding respectable roles difficult to come by. In 1971, Field starred in the ABC TV movie Maybe I'll Come Home in the Spring, playing a discouraged teen runaway who returns home with a bearded, drug-abusing hippie (played by David Carradine).[8][9] She made several guest television appearances through the mid 1970s, including a role on the western Alias Smith and Jones, a popular TV series starring Gidget co-star Pete Duel.[10] She also appeared in the episode "Whisper" on the TV thriller Night Gallery.

In 1973, Field was cast in a starring role opposite John Davidson in the short-lived series The Girl with Something Extra from 1973 to 1974.[11] Following the series' cancellation, Field studied at the Actors Studio with the acting teacher Lee Strasberg. Strasberg became a mentor to the actress, helping her to move past her television image of the girl next door. It was during this time period that Field divorced her first husband in 1975.[12][13][14]

Soon after studying with Strasberg, Field landed the title role in the 1976 TV film Sybil, based on the book by Flora Rheta Schreiber. Her dramatic portrayal of a young woman afflicted with multiple personality disorder earned her a best dramatic actress Emmy Award in 1977[15] and enabled her to break through the typecasting of her sitcom work.

In 1977, she co-starred with Burt Reynolds, Jackie Gleason, and Jerry Reed in the year's #2 highest-grossing film, Smokey and the Bandit.[16]

In 1979, Field played the eponymous union organizer in Norma Rae, a successful film that established her as a dramatic actress. Vincent Canby, reviewing the film for The New York Times, wrote: "Norma Rae is a seriously concerned contemporary drama, illuminated by some very good performances and one, Miss Field's, that is spectacular."[17] For her role in Norma Rae, Field won the Best Female Performance Prize at the Cannes Film Festival and the Academy Award for Best Actress.

Field appeared with Reynolds in three more films: The End, Hooper and Smokey and the Bandit II.[18] In 1981, she continued to change her image, playing a foul-mouthed prostitute opposite Tommy Lee Jones in the South-set film Back Roads.[19] She received Golden Globe nominations for the 1981 drama Absence of Malice and the 1982 comedy Kiss Me Goodbye.[20]

Then came a second Oscar for her starring role in the 1984 drama Places in the Heart.[21] Field's gushing acceptance speech is well remembered and has since been both admired as earnest and parodied as excessive. She said, "I haven't had an orthodox career, and I've wanted more than anything to have your respect. The first time I didn't feel it, but this time I feel it—and I can't deny the fact that you like me, right now, you like me!"[22] Field was actually making a humorous reference to dialog from her role in Norma Rae, but many people missed the connection.[23] Field even parodied herself when she delivered the line (often misquoted as "You like me, you really like me!"[24]) in a Charles Schwab commercial.

In 1985, she costarred with James Garner in the romantic comedy Murphy's Romance.[25] In A&E's biography of Garner, she cited her on-screen kiss with Garner as the best cinematic kiss she ever had. The following year, Field appeared on the cover of the March 1986 issue of Playboy magazine, in which she was the interview subject. She did not appear as a pictorial subject in the magazine, although she did wear the classic leotard and bunny-ears outfit on the cover. That year, she received the Women in Film Crystal Award.[26] For her role as matriarch M'Lynn in the film version of Steel Magnolias (1989), she was nominated for a 1990 Golden Globe Award for Best Actress.[27]

Field at the 1990 Academy Awards ceremony

Field had supporting roles in a number of other movies, including Mrs. Doubtfire (1993) in which she played Miranda Hillard, the wife of Robin Williams's character and the love interest of Pierce Brosnan's character Stuart 'Stu' Dunmyer. She then played Tom Hanks's mother in Forrest Gump (1994), even though she was only 10 years older than Hanks, with whom she had co-starred six years earlier in Punchline.

Field's other 1990s films included Not Without My Daughter, a controversial thriller based on the real-life experience of Betty Mahmoody's escape from Iran with her daughter Mahtob; and Soapdish, a comedy in which she played pampered soap-opera star Celeste Talbert and was joined by an all-star cast, including Kevin Kline, Whoopi Goldberg, Elisabeth Shue, and Robert Downey, Jr. In 1996, Field received the Berlinale Camera award at the 46th Berlin International Film Festival for her role as a grieving vigilante mother in director John Schlesinger's film Eye for an Eye.[28] She co-starred with Natalie Portman in Where the Heart Is (2000) and appeared opposite Reese Witherspoon in Legally Blonde 2: Red, White & Blonde.

Field had a recurring role on ER in the 2000-2001 season as Dr. Abby Lockhart's mother, Maggie, who suffers from bipolar disorder, a role for which she won an Emmy Award in 2001. After her critically acclaimed stint on the show, she returned to the role in 2003 and 2006. She also starred in the very short-lived 2002 series The Court.

Field at BookExpo America in June, 2018

Field's directorial career began with the television film The Christmas Tree (1996).[29] In 1998, she directed the episode "The Original Wives' Club" of the critically acclaimed TV miniseries From the Earth to the Moon, also playing a minor role as Trudy, the wife of astronaut Gordon Cooper.[30] In 2000, she directed the feature film Beautiful.

Field was a late addition to the ABC drama Brothers & Sisters, which debuted in September 2006. In the show's pilot, the role of matriarch Nora Walker was played by Betty Buckley.[31] However, the show's producers decided to take the character in another direction, and offered the part to Field, who won the 2007 Emmy Award for Outstanding Lead Actress in a Drama Series for her performance.[32] The drama also starred Calista Flockhart and Rachel Griffiths as Nora's adult daughters.[31] In November 2009, Field appeared on an episode of The Doctors to talk about osteoporosis and her Rally With Sally Foundation.

On May 5, 2014, Field received a star on the Hollywood Walk of Fame for her contributions to motion pictures. Her star is located in front of the Hollywood Wax Museum.[33] In January 2015, it was announced that she would co-host TCM.[34] The same year, Field portrayed the titular character in Hello, My Name Is Doris, for which she was nominated for the Critics' Choice Movie Award for Best Actress in a Comedy.

In 2017, Field reprised her role as Amanda Wingfield in The Glass Menagerie on Broadway at the Belasco Theatre. Performances began on February 7, 2017, in previews, and officially opened on March 9. The production closed on May 21, 2017. Field had previously played the role in the Kennedy Center production in 2004.[35] She was nominated for a Tony Award for Best Actress in a Play for her performance.[36] Her memoir, In Pieces, was published by Grand Central Publishing in September 2018.[37]

On October 29, 1988, at Aspen-Pitkin County Airport in Colorado, Field and three members of her family were in a private plane owned by media mogul Merv Griffin when it lost power and aborted takeoff, slamming into parked aircraft.[40] They all survived with minor injuries.[41]

After the end of her relationship with Reynolds, Field married second husband Alan Greisman in 1984. Together they had one son, Sam, in 1987. Field and Greisman divorced in 1993.[38]

In 2005 Field was diagnosed with osteoporosis. Her diagnosis led her to create the "Rally with Sally for Bone Health" campaign[42] with support from Roche and GlaxoSmithKline that controversially co-promoted Boniva,[43][44] a bisphosphonate treatment for osteoporosis. Field's campaign encouraged the early diagnosis of such conditions through technology such as bone-density scans.[45]

During her acceptance speech at the 2007 Emmy Awards, when she won for Outstanding Lead Actress in a Drama Series, Field said: "If the mothers ruled the world, there would be no goddamn wars in the first place."[46] Fox Broadcasting Company, which aired the show, cut the sound and picture after the word "god" and did not return camera/sound to the stage until after Field finished talking.[46] An e-mail statement from the company the day after the incident explained that the censorship of Field's speech (among two other censorship incidents during the award ceremony) occurred because "some language during the live broadcast may have been considered inappropriate by some viewers. As a result, Fox's broadcast standards executives determined it appropriate to drop sound and picture during those portions of the show."[46]

Field is an advocate for women's rights. She has served on the board of directors of Vital Voices Global Partnership, an international women's NGO, and has co-hosted the Global Leadership Awards six times.[47] A Democrat, Field supported Hillary Clinton's bid for the Democratic Party nomination in the 2008 presidential election.[48]

Field is also an advocate for gay rights and won the Human Rights Campaign's Ally for Equality Award in 2012. Her youngest son, Sam, is gay.[49]