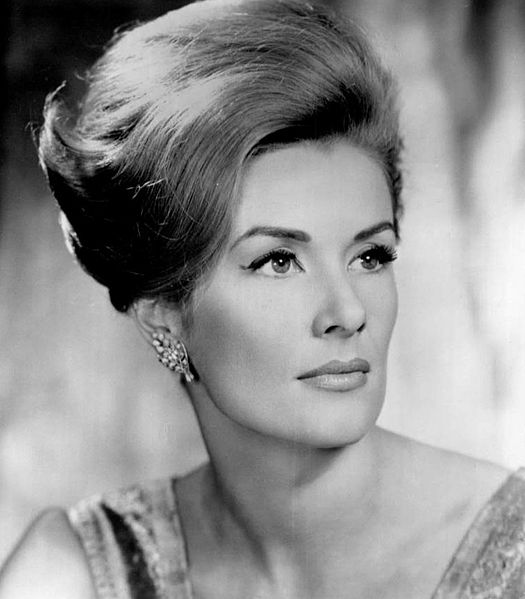 Sally Ann Howes (born 20 July 1930) is an English actress and singer who holds dual British-American citizenship. Her career on stage, screen, and television has spanned over six decades. She is best known for the role of Truly Scrumptious in the 1968 musical film Chitty Chitty Bang Bang. She was nominated for the Tony Award for Best Lead Actress in a Musical in 1963 for her performance in Brigadoon.

Howes was born in St John's Wood, London, the daughter of British comedian/actor/singer/variety star Bobby Howes (1895-1972) and actress/singer Patricia Malone (1899-1971). She is the granddaughter of Capt. J.A.E. Malone (died 1928), London theatrical director of musicals, and she had an older brother, Peter Howes, a professional musician and music professor. Her great-grandfather, Joseph Malone, was awarded the Victoria Cross in 1854 at the Charge of the Light Brigade. Her uncle, Pat Malone, was an actor on stage, films, and television.

Howes moved to the family's country house in Essendon, Hertfordshire, for the duration of World War II. She was a show-business baby who lived a quiet, orderly childhood, where she grew up with a nanny and was surrounded by a variety of pets and her parents' theatrical peers, including actor/writer Jack Hulbert and his wife, actress Cicely Courtneidge, who had an adjoining house. Her first taste of the stage was school productions, but as she came from a theatrical family, another family friend, an agent who was visiting the Howes family for dinner, inevitably became impressed with her and not long after suggested the young Sally Ann for a role in a movie. Two hundred young girls had already been screen tested without success, and the producers were desperate to find a talented little girl to play the lead, and they asked her father to please rush in some pictures on the recommendation of the agent. The movie, Thursday's Child, was written by playwright and screenwriter Rodney Ackland, also a close neighbour to the Howes family, and it would become Ackland's directorial debut. Thursday's Child (1943) launched her career. A second film, The Halfway House (1944), led to her being put under contract by Michael Balcon of Ealing Studios, and this was followed by many other film roles as a child actress, including Dead of Night (1945) with Sir Michael Redgrave, Pink String and Sealing Wax (1946), Nicholas Nickleby (1947), My Sister and I (1948) and Anna Karenina (1948), with Vivien Leigh.

Musical theatre on the West End and Broadway

Howes had begun taking singing lessons on the recommendation of a visiting teacher friend not only to bring out her natural talents but also in effort to lower her speaking voice, which was quite high-pitched. While still in her teens, she made her first musical-comedy stage appearance in Fancy Free. In late 1950, she starred in a BBC TV version of Cinderella.

That same year, Howes accepted her first professional stage role in the Sandy Wilson musical, Caprice, forcing her to terminate her contract with Rank, with whom she had been unhappy with the film roles and being on "loan out". She was finding gainful employment in television and radio, and she was looking to flex her singing talent, something that both Balcon and Rank had overlooked. Caprice was followed by Bet Your Life with Julie Wilson, Arthur Askey, and Brian Reece. She was also simultaneously on the radio with Askey and Reece. In 1953, she starred on the West End in the musical Paint Your Wagon with her father, Bobby Howes. The show ran for 18 months. It was followed by Summer Song, also on the West End, firmly establishing her as a leading musical comedy star. This was followed by her critically acclaimed performance in the stage drama, A Hatful of Rain. In the early-to-mid-1950s, she also mixed her theatre with television appearances and even modelling, commercials, and product endorsements.

She became a popular celebrity in England, even appearing as a comic-strip character in TV Fun serial comics and annuals, as a young, wholesome teacher in the wild American West at a time when Western TV shows were very popular. She appeared on the cover of many magazines, most notably Life (3 March 1958), when she was in the United States to take over from Julie Andrews in My Fair Lady on Broadway.

In late 1957, Howes was offered the part (for the third time) to enable Andrews to join the cast of the London production. She had turned it down twice before. The first offer had been to join the USA touring company of the musical, and the second time she declined the part was due to her film commitment for Admirable Crichton (1957). With the persistence of Lerner and Loewe, however, she accepted the third time, for a year's contract, but at a higher salary than Julie Andrews. She became an instant hit as a very fiery Eliza Doolittle.

In January 1958, Howes married Tony-winning composer Richard Adler (The Pajama Game, Damn Yankees) . The following December, she appeared on television in Adler's musical adaptation (which was written for her) of O. Henry's short story, The Gift of the Magi. Adler and Bob Merrill collaborated on a musical version of W. Somerset Maugham's Of Human Bondage so that Howes could play Mildred.

She appeared on many TV shows, including those of Perry Como, Dinah Shore, and Jack Paar in 1962, The Tonight Show, plus appearing in The Bell Telephone Hour, The Kraft Music Hall, and The United States Steel Hour. She appeared on The Ed Sullivan Show four times.

When her one-year contract in My Fair Lady was over, she returned to Britain to tape six 1-hour variety shows The Sally Ann Howes Show for the British commercial television network. She was also personally requested to sing for three US presidents (Dwight D. Eisenhower, John F. Kennedy, and Lyndon B. Johnson). She became a frequent guest panellist on game shows and was known for her quick, spontaneous answers.

She returned to Broadway in 1961 in the short run of Kwamina, another Adler musical which was written for her. She starred opposite Terry Carter. The musical centred on an interracial love story and was too controversial in a time when civil rights were hotly contested. The show has not had a Broadway revival since. Coincidentally, her father was also on Broadway that year with a short revival of Finian's Rainbow, and a cast album exists of that show, as well.

In 1962, she starred in a short revival of the musical Brigadoon at the New York City Opera and received a Tony nomination, the first performer to be nominated for a revival performance. She recreated the role in a private White House performance at the express invitation of President and Mrs. Kennedy. In 1964, she starred on Broadway opposite Robert Alda and Steve Lawrence in the energetic What Makes Sammy Run?, which lasted over 500 performances.

She returned to familiar territory on TV in 1966 with Brigadoon opposite Robert Goulet, Peter Falk, and some of her Broadway cast; it won six Emmy Awards.

In 1967, Howes began the long shooting schedule for what would one day become a classic children's film, Chitty Chitty Bang Bang (1968). She starred as Truly Scrumptious, the beautiful, aristocratic daughter of a confectionery magnate.

Chitty Chitty Bang Bang did not, however, restart her film career or launch a career for her in episodic television despite several guest-starring roles in Mission: Impossible, Marcus Welby, M.D., Branigan, and The Men From Shiloh. Even the pilot Prudence and the Chief, which was a spoof on The King and I, did not get picked up as a TV series. In addition, musicals were now failing at the box office and that avenue was closed to her. As a result, she returned almost exclusively to the musical stage, appearing in only a few more films and TV productions.

In the 1970s and 1980s, she began to cross over from standard musicals to operettas. She performed two summers with the Kenley Players in Blossom Time and The Great Waltz, and she later added Franz Lehár's The Merry Widow and then two seasons of Stephen Sondheim's A Little Night Music at the New York City Opera. She also added the role of Gertrude in Hamlet to her repertoire.

In 1990, she debuted her one-woman show, From This Moment On, at the Edinburgh Festival and at a benefit for the Long Island AIDS Association at the John Drew Theatre in East Hampton, New York. Her last film was the 1992 miniseries Judith Krantz's Secrets. That marked her 50th year in film.

Except for occasional lectures, charity functions, and some Broadway openings, she is semi-retired, although she still hosts events or performs two or three times per year. Over the period September 2007 to January 2008, she toured the USA in the Cameron Mackintosh production of My Fair Lady, appearing as Mrs. Higgins. When she is not performing, she is an artistic advisor for the Palm Beach Theatre Guild, a non-profit organisation dedicated to preserving the Royal Poinciana Playhouse in Palm Beach, Florida.

Howes adopted her second husband Richard Adler's two sons, Andrew and Christopher (a Broadway lyricist who died at age 30 of cancer in 1984).[1]

She has been married to Douglas Rae since the early 1970s.

Early TV appearances included a guest appearance in "Cafe Continental" with her father when they faced the camera together for the first time. Other appearances included "Kaleidoscope, and her own Sunday night series called "Short and Sweet" with Harry Jacobson at the piano. She appeared in the 1951 Festival of Musical Production, which was written for her and entitled "The Golden Year."

In the late 1940s and early 1950s, she appeared on many radio programmes including: "Ignorance is Bliss," "Geraldo's Open House," "Taxi" with Jerry Verno, "Desert Island Discs," "Talk Yourself Out of This," and she appeared twice on the "Calling All Forces" show.

She has several Broadway, West End, TV and Film cast albums available including:

She can also be found on the albums The Best of the Telephone Hour, Cole Porter: A Remembrance (1965), An Evening With Alan Jay Lerner (1987), and the three Christmas songs she recorded, Toyland, It Came Upon A Midnight Clear, and O Little Town of Bethlehem can be found reissued each year on various compilation Christmas albums. The last known recording she made was a gift album for a party for a friend, called Mary Lea, Songs My Sister Loved & Sang (1998) for which she holds the production rights and copyright.

In the late 1940s and early 1950s, Sally Ann Howes lent her face to many products,[citation needed] a few of which are mentioned here:

She did some modelling in the 1950s and early 1960s, and can be found in the following publications:

The following publications feature portions about her career and life. For magazine articles and covers, see her biography on the Internet Movie Database: Sally Ann Howes on IMDb .

Report a problem
Write to Sally Ann Howes at FanPal • 2022