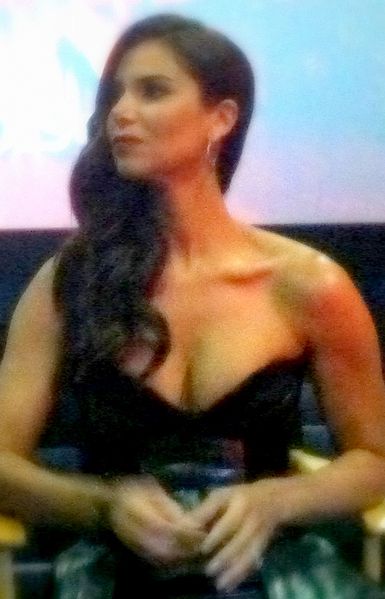 Sánchez (birth name: Roselyn Milagros Sánchez Rodríguez[note 1] in San Juan, Puerto Rico,[1] is the youngest of four siblings, having three older brothers. She received her primary education in San Juan. At a young age, she showed an interest in both dancing and acting and would put on shows for her family. Sánchez enrolled in the University of Puerto Rico, where like her father and brothers she was to study marketing.[2] However, after three years she left the course. In 1991, at the age of 18, Sánchez moved to New York City, where she took classes in dancing, acting and singing.[3] She returned to Puerto Rico, and in 1992 she made her movie debut, having landed a small part as an island girl in the movie Captain Ron, which was partly filmed in Puerto Rico, starring Martin Short and Kurt Russell.
Read more...

In Puerto Rico, Sánchez gained public attention as a dancer and as co-host of a variety show called Qué Vacilón. At that time, in 1993, Sánchez won the Miss Puerto Rico Petite contest, and in 1994 she won the international title of Miss American Petite, bringing her international fame. Sánchez has been named to numerous annual lists of beautiful women including Maxim Magazine's "Hot 100" in 2001, 2002 and 2006; AskMen.com's "Top 99 Most Desirable Women" in 2005 and 2006; and FHM's "100 Sexiest Women" in 2005 and 2006.[4]

In 2001, Sánchez was cast as Isabella Molina, an undercover United States Secret Service agent who was Jackie Chan's love interest in the hit movie Rush Hour 2. In 2003, she played the role of Lorena in the movie Chasing Papi, starring alongside Jaci Velasquez and Sofia Vergara. Sánchez has acted in some 20 movies, including as Maria in Edison and as Karen Lopez in Underclassman. She starred in the Puerto Rican film Cayo, released in 2005.

In 2003, her first musical recording, Borinqueña, was released. The album's first single, "Amor Amor", gained a lot of attention as well as a Latin Grammy nomination for Best Music Video. She appeared in Craig David's music videos "Hidden Agenda" and "Personal" and in the Fabolous video for the song "Make Me Better".

In the fall of 2005, Sánchez joined the cast of the CBS television series Without a Trace, where she played Agent Elena Delgado to 2009. She composed the musical Yellow, about a singer/dancer/actress who leaves Puerto Rico to hit the big time in New York, in which she played the principal part. The movie was filmed in 2005 and released in 2007. Also in 2007, she acted as Monique, the ballet teacher, in The Game Plan, and in 2009, starred in The Perfect Sleep, a neo-noir drama, co-starring Patrick Bauchau, Tony Amendola, Isaac Singleton, and Peter Lucas. In 2011, Sánchez made a guest appearance on TNT's Rizzoli & Isles, playing villainous attorney Valerie Delgado.

Sánchez was married from August 9, 1998, to April 15, 2001, to the English actor, former boxer and former model Gary Stretch. After her divorce, she started a relationship with Puerto Rican salsa singer Víctor Manuelle. However, in December 2005, she announced that she had ended their relationship; the separation was amicable. She married actor Eric Winter on 29 November 2008, in San Juan, Puerto Rico.[8][9] In August 2011, Sánchez announced that she and Winter were expecting their first child together.[10] Their daughter, Sebella Rose Winter, was born on January 4, 2012.[11] In June 2017, the couple announced that they are expecting their second child.[12] The couple welcomed son, Dylan Gabriel Winter on November 3, 2017.[13]

Sánchez is a supporter of animal rights and an active member of PETA. She recently appeared nude in a PETA ad in support of anti-fur campaign efforts.[14] She is the spokesperson of the Fundación de Niños San Jorge, which assists sick children from poor families.[15]

Report a problem
Write to Roselyn Sanchez at FanPal • 2021