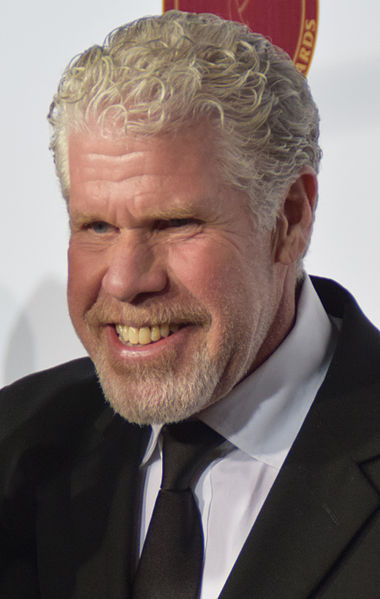 Ronald Perlman (born April 13, 1950) is an American actor and voice actor. He played the role of Vincent on the television series Beauty and the Beast (1987-1990), for which he won a Golden Globe Award, the comic book character Hellboy in both Hellboy (2004) and its sequel Hellboy II: The Golden Army (2008), and Clay Morrow on the television series Sons of Anarchy (2008-2013).

Perlman is known as a collaborator of Hellboy director Guillermo del Toro, having roles in the del Toro films Cronos (1993), Blade II (2002), and Pacific Rim (2013). He is also known for his voice-over work as the narrator of the post-apocalyptic game series Fallout, Clayface on Batman: The Animated Series, Slade on the animated series Teen Titans, The Lich on Adventure Time, and The Stabbington Brothers in Disney's animated film Tangled (2010).

Ronald Perlman[1] was born in Washington Heights, New York. His mother, Dorothy (née Rosen), (1921-2018) was a municipal employee, and his father, Bertram "Bert" Perlman, (1919-1969) was a jazz drummer and television repairman.[2][3] Perlman said in 1988, "It was not a bad childhood but I had a perception of myself that was ... I was terribly overweight as a young kid, and it was sort of a low self image."[4] He cited this experience as one thing that attracts him to roles where he portrays "these sorts of deformed people who are very endearing".[5] His parents are Jewish (their families were from Hungary and Poland). Perlman had a Bar Mitzvah ceremony.[6][7][8]

He has said that he and his father were "very close" and that it was his father, after seeing Perlman in a college production of Guys and Dolls, who told him that he "had to" pursue a career as an actor. Perlman later said that his father essentially "gave permission to be an actor".[5] He attended the University of Minnesota, where he graduated with a master's degree in theater arts in 1973.[1]

Perlman at the 41st Primetime Emmy Awards in September 1989.

Perlman started his career as a stage actor, appearing in various productions, and made his feature film debut in Jean-Jacques Annaud's film Quest for Fire (1981). Annaud later revealed that when he contacted Perlman to ask him about playing Salvatore in The Name of the Rose (1986), Perlman was thinking of abandoning his career. After various minor and supporting roles in films and television series, his breakthrough role came when he played Vincent on the television series Beauty and the Beast, opposite Linda Hamilton from 1987 to 1990. This earned him a Golden Globe Award for Best Performance by an Actor in a Television Series in 1989.[9]

He went on to play roles in many films and television series throughout the 1980s and 1990s as well as the 2000s. His most notable film appearances were in films such as The Name of the Rose (1986), Romeo is Bleeding (1993), The Adventures of Huck Finn (1993), Police Academy: Mission to Moscow (1994), The Last Supper (1995), The Island of Dr. Moreau (1996), Alien Resurrection (1997), Enemy at the Gates (2001), Blade II and Star Trek: Nemesis (both 2002) and two Stephen King story-to-movie adaptations, Sleepwalkers and Desperation. His appearances on television series include Highlander: The Series, The Outer Limits, The Magnificent Seven, and the Amazon series Hand of God.

He played his first leading film role in 1995, when he played "One" in Jean-Pierre Jeunet and Marc Caro's French-language The City of Lost Children. In 2003, Perlman starred in a commercial for Stella Artois beer. This commercial, which was called "Devil's Island",[10] won a Silver Award at the 2003 British Advertising Awards.[11][12] He got another leading film role in 2004 when he played the title role in the comic book adaptation Hellboy. Perlman reprised his role as Hellboy in the straight to DVD animated features Hellboy: Sword of Storms (2006) and Hellboy: Blood and Iron (2007) as well as Hellboy II: The Golden Army, released on July 11, 2008.

Perlman also has a successful career as a voice actor in addition to his onscreen acting. Having portrayed characters in numerous video games and animated series and in voice-over work in television commercials.[13] These include Casper High English teacher and vice-principal Mr. Lancer in Danny Phantom, The Lich in Adventure Time, Kurtis Stryker in Mortal Kombat: Defenders of the Realm, Justice in Afro Samurai and various characters in DC Comics based series such as the villainous Slade, a version of DC character Deathstroke in the Teen Titans animated series and again in Justice League: The Flashpoint Paradox, Clayface in Batman: The Animated Series and The New Batman Adventures, Jax-Ur in Superman: The Animated Series, Orion in Justice League and Justice League Unlimited, Sozin in Avatar: The Last Airbender, several villains (Killer Croc, Rumor and Bane) in The Batman, Doctor Double X in Batman: The Brave and the Bold, and Sinestro in Green Lantern: The Animated Series.

His video game credits include Fleet Admiral Lord Terrence Hood in the games Halo 2 and Halo 3, Jagger Valance in The Chronicles of Riddick: Escape from Butcher Bay, and Batman in Justice League Heroes. He is well known by Fallout fans for narrating the introductory movies in the series, including uttering the famous phrase "War. War never changes." He also voices "Slade" in the 2008 Turok game, and Emil Blonsky/Abomination in Incredible Hulk: Ultimate Destruction, Conan for the PS3 and Xbox 360, and voices the fast-talking Mayor Hoodoo Brown in the Neversoft game Gun. He also made an appearance in Payday 2 as "Rust", part of the "Biker Pack" DLC.

Perlman also provided the narration for the introduction to UFC on FOX 13.

Perlman is spiritual but not religious, and described himself as a lifelong Democrat in November 2016.[15] He has volunteered as an actor with the Young Storytellers Program.

On June 26, 2018, Perlman claimed to have urinated on his hand before a requested handshake with Harvey Weinstein at a charity event.[17]

Report a problem
Write to Ron Perlman at FanPal • 2021