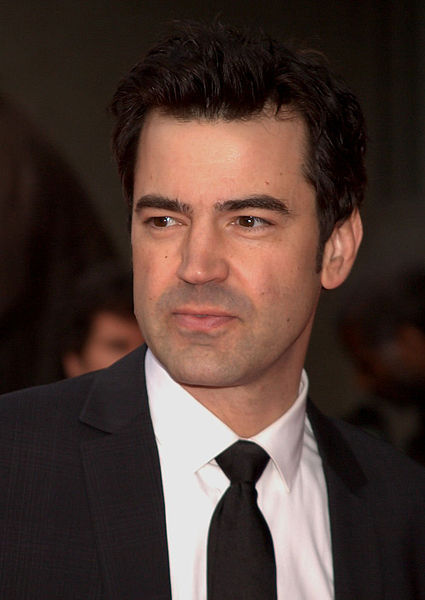 Ronald Joseph Livingston (born June 5, 1967)[1][2] is an American actor. Livingston is known for his starring role as Peter Gibbons in the 1999 movie Office Space, as well as his role as Captain Lewis Nixon in the 2001 miniseries Band of Brothers.

Livingston's other notable roles were in the films Swingers (1996), Adaptation (2002), The Conjuring (2013), and the television series Loudermilk and Boardwalk Empire, on which he appeared in the fourth season.

Livingston was born in Cedar Rapids, Iowa, to Linda (née Rinas), a Lutheran pastor, and Kurt Livingston, an aerospace/electronics engineer.[3][4][5] His younger brother John is also an actor; sister Jennifer Livingston and brother-in-law Mike Thompson are TV news personalities at WKBT in La Crosse, Wisconsin. Livingston first acted at Theatre Cedar Rapids after being introduced to the group during a school job shadowing.[6] Livingston moved to Chicago and became involved in the local theater scene.
Read more...

Livingston's first film role was in 1992, in Dolly Parton's Straight Talk. He moved to Los Angeles and was cast in supporting roles in Some Folks Call it a Sling Blade and The Low Life. Livingston landed his first role in a major film in 1996's Swingers. He starred as the male lead, Peter Gibbons, in the comedy cult classic Office Space, which co-starred Jennifer Aniston and was written and directed by Mike Judge. He also appeared in HBO's miniseries Band of Brothers as Captain Lewis Nixon opposite Donnie Wahlberg and Damian Lewis. Going beyond nice-guy roles, Livingston played a Hollywood agent in Adaptation (2002); a weaselly Ivy League upstart to Alec Baldwin's casino boss in The Cooler (2003); and teachers in Winter Solstice and Pretty Persuasion (both 2005). He also appeared as sardonic writer Jack Berger, Carrie's short-term boyfriend in the fifth and sixth seasons of Sex and the City. He guest starred in the episode "TB or Not TB" of House. In 2006, he starred as FBI negotiator Matt Flannery in the Fox series Standoff, co-starring Rosemarie DeWitt, and he was an ad spokesman for Sprint Nextel.

In summer 2007, Livingston appeared on the off-Broadway stage in the world premiere of Neil LaBute's In a Dark Dark House, produced by MCC Theater, with Frederick Weller and Louisa Krause. The show ran from May-July at the Lucille Lortel Theatre in New York City. In November 2007, the indie film Holly told the story of a Vietnamese girl trafficked into the sex trade in Cambodia. Livingston starred as Patrick, a shady card shark who becomes determined to save Holly from her ill-destined fate.

In 2009, he portrayed flight engineer Maddux Donner in the series Defying Gravity, which was cancelled after its first season.[7]

In 2010, Livingston co-starred in the Jay Roach comedy Dinner for Schmucks.[8] On February 26, 2013, Entertainment Weekly confirmed that he would be joining the cast of HBO's Boardwalk Empire for the fourth season.[9]

In 2013, Livingston co-starred in the indie comedy Drinking Buddies alongside Olivia Wilde, Jake Johnson and Anna Kendrick. Drinking Buddies received positive reviews from critics. Rotten Tomatoes gives the film a score of 82% based on 97 reviews.[10]

Livingston currently stars in the Audience comedy television series, Loudermilk. In the Peter Farrelly produced series, Livingston plays the title role of Sam Loudermilk, a substance abuse counselor who is also a recovering alcoholic who is known for his bad behavior and attitude. The show premiered in October 2017 and was renewed in April 2018 for a second season that will premiere in October 2018.[11] He also stars in the upcoming ABC family drama series A Million Little Things as Jon Dixon, whose suicide causes his group of friends to evaluate their own lives [12]

Livingston and his Standoff co-star Rosemarie DeWitt began a relationship after meeting on the show.[13] After dating for three years, they were married on November 2, 2009, in San Francisco.[14] He was previously engaged to actress Lisa Sheridan.[15]