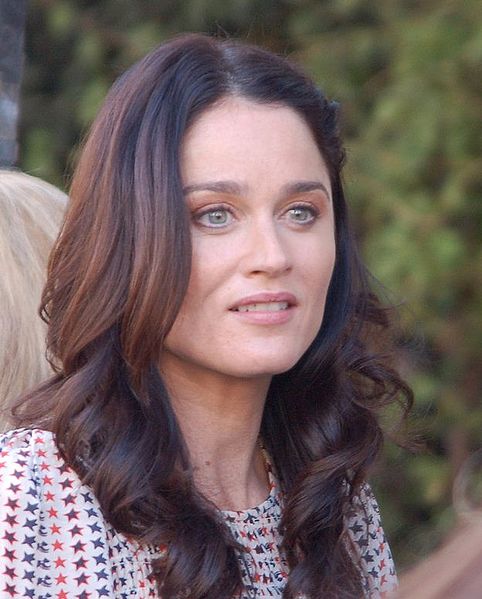 Robin Tunney (born June 19, 1972) is an American actress. She is known for her role as Teresa Lisbon on the television series The Mentalist (2008-15), and her portrayal of Veronica Donovan on the first two seasons of Prison Break (2005-06).

Tunney made her film debut in the 1992 comedy Encino Man. She came to prominence with leading roles in the cult films Empire Records (1995) and The Craft (1996). She received the Volpi Cup for Best Actress, as well as Gotham and Independent Spirit nominations for her performance in Niagara, Niagara (1997). She had leading roles in the action-thriller films End of Days (1999), Supernova and Vertical Limit (both 2000). In 2006, she earned critical acclaim for her portrayal of a victim of sexual assault in the independent drama Open Window.[1] Her other notable film appearances include Cherish, The Secret Lives of Dentists (both 2002), The In-Laws (2003), Hollywoodland (2006), August, The Burning Plain (both 2008), Passenger Side (2009), and Looking Glass (2018).

Tunney was born in Chicago, Illinois, to a car salesman father, Patrick, and a bartender mother, Cathy.[2][3][4] Tunney is Irish American;[5][6] her father was born in Straide, County Mayo, Ireland, while her maternal grandparents were from Clare Island.[7] Tunney grew up in Orland Park, a southwest suburb of Chicago. She was raised Roman Catholic,[6] attended Carl Sandburg High School in Orland Park and the Chicago Academy for the Arts in Chicago,[8] and resided in Palos Heights, also in the Chicago area.[9] She is a cousin of Chicago Alderman Tom Tunney.[9]
Read more...

At the age of 19, Tunney moved to Los Angeles, California, and obtained several recurring television roles on Class of '96, Law & Order, Dream On, and Life Goes On. She gave her breakthrough performance as a suicidal girl in Empire Records (with a shaved head) and attracted further attention by playing a witch in The Craft.

In 1997, Tunney starred in (her husband at the time) Bob Gosse's Niagara, Niagara with Henry Thomas in a performance which garnered her the Best Actress award Volpi Cup at the 1997 Venice International Film Festival. Tunney also was featured opposite Arnold Schwarzenegger in the 1999 supernatural action film End of Days.

She starred in the pilot episode of House as a kindergarten teacher who collapses before her class and descends into aphasia; she was credited as a "special guest star". She portrayed Veronica Donovan on the first season of Prison Break, credited third after two main characters, and left the show after the premiere episode of the second season. She had a minor role in the film August released on July 11, 2008. Tunney also starred opposite Simon Baker in the CBS drama series The Mentalist, playing Teresa Lisbon.

On June 28, 2006, Tunney won her table in the eighth tournament series of Bravo's Celebrity Poker Showdown, moving on to the final table. The finale aired on July 5, 2006, where she finished second to Jason Alexander, earning $200,000 for her charity of choice, The Children's Health Fund. In August 2006, Tunney played in the World Series of Poker after having her entrance fee covered by the online cardroom PokerRoom.com.