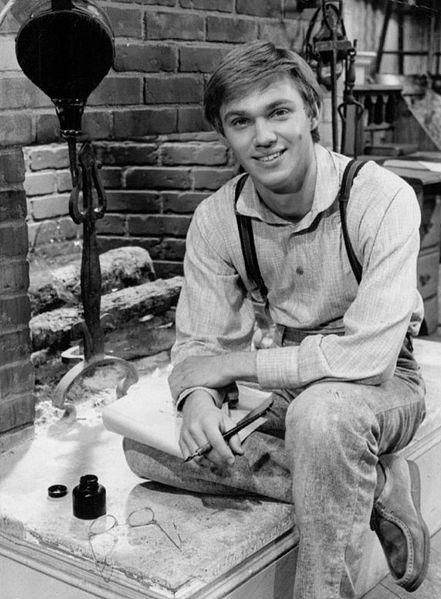 Richard Earl Thomas (born June 13, 1951) is an American actor. He is best known for his leading role as budding author John-Boy Walton in the CBS drama The Waltons, for which he won one Emmy Award and received nominations for another Emmy Award and two Golden Globe Awards. He also played Special Agent Frank Gaad on FX's spy thriller series The Americans (2013-2016), appeared in Stephen King's mini series IT (1990), and had a supporting role in the comedy-drama film Wonder Boys (2000).

Thomas was born in Manhattan, the son of Barbara (née Fallis) and Richard S. Thomas, in 1951.[1] His parents were dancers with the New York City Ballet and owned the New York School of Ballet. He attended The Allen Stevenson School and the McBurney School in Manhattan. Thomas was seven when he made his Broadway debut in Sunrise at Campobello (1958) playing John Roosevelt, son of future U.S. President Franklin Delano Roosevelt.
Read more...

Thomas soon began his television career. In 1959, he appeared in the Hallmark Hall of Fame NBC TV presentation of Ibsen's A Doll's House with Julie Harris, Christopher Plummer and Hume Cronyn.[2] He then began acting in daytime TV, appearing in soap operas such as The Edge of Night (as Ben Schultz, 1961), A Flame in the Wind, and As the World Turns (as Tom Hughes, 1966-67), which were broadcast from his native Manhattan.

Thomas received his first major film roles, appearing in Winning (1969) with Paul Newman, about auto racing,[3] and Last Summer (also 1969) with Bruce Davison and Barbara Hershey, a summer coming-of-age movie.[4] He starred in the Universal Pictures/Hal Wallis Production Red Sky at Morning (1971),[5] which was a financial failure.

He became internationally recognized for his portrayal of John "John-Boy" Walton, Jr., in the 1970s TV series The Waltons, which was based on the real life story of writer Earl Hamner, Jr. He appeared in the CBS television film The Homecoming: A Christmas Story (1971),[6] which inspired the commissioning of the largely recast series, and then played the role continuously in 122 episodes until March 17, 1977. Thomas left the series and his role was taken over by Robert Wightman, but Thomas returned to the role in three Waltons TV movies, 1993-97. (The first was A Walton Thanksgiving Reunion in 1993.[7]) Thomas won an Emmy for Best Actor in a Dramatic Series in 1973. He enrolled in Columbia College of Columbia University as a member of the class of 1973 but left after his junior year.

In 1972, he played against type as murderer and rapist Kenneth Kinsolving in You'll Like My Mother opposite Patty Duke.[8] He played the lead roles of Private Henry Fleming in the 1974 NBC TV movie The Red Badge of Courage,[9] and Paul Baumer in the 1979 Hallmark Hall of Fame TV movie on CBS All Quiet on the Western Front.[10]

In 1980, Thomas made his first Broadway appearance in more than 12 years when he was a replacement in Lanford Wilson's Fifth of July.[17] In 1980, he appeared as Shad, the young farmer entrusted to employ mercenaries to save his planet from Sador and his invading forces, in Battle Beyond the Stars.[18]

In 1987, he appeared on stage in Philadelphia and Washington DC in the one-man tour-de-force Citizen Tom Paine. In 1993, he played the title role in a Shakespeare Theater (Washington, DC) stage production of Richard II.[19]

Thomas starred with Maureen O'Hara and Annette O'Toole in the Hallmark Channel movie The Christmas Box in 1995. O'Toole and Thomas had starred in It together five years earlier.[20]

In 2001, he appeared in London's West End in a theater production of Yasmina Reza's Art with Judd Hirsch;[22] on the New York stage in The Public Theater's production in Central Park of As You Like It (2005);[23] Michael Frayn's Democracy on Broadway (2004)[24] and the Primary Stages' Off-Broadway production of Terrence McNally's The Stendhal Syndrome (2004).[25]

He has served as national chairman of the Better Hearing Institute, having suffered a hearing loss in his early 30s.[26]

In 2006, Thomas began an American theater tour of Reginald Rose's play Twelve Angry Men, along with George Wendt at the Shubert Theater in New Haven, Connecticut, playing the pivotal role of Juror Eight opposite Wendt's Juror One.[30]

Thomas has provided voiceovers in Mercedes-Benz, BB&T and Aleve commercials. In the summer of 2008, Thomas made commercials for the Zaxby's restaurant chain.

In 2009-2010, Thomas was featured on Broadway in Race, a play by David Mamet. The production was directed by Mamet and included James Spader, David Alan Grier, and Kerry Washington.[31] In February and March 2011, he starred at the Off-Broadway New York Public Theater in Timon of Athens.[32]

Thomas had a supporting role in the FX Network Cold War drama The Americans, which debuted in January 2013.[33] He played Frank Gaad, an FBI counterintelligence supervisor helping to investigate KGB sleeper agents in early 1980s America.

Thomas appeared in the 2017 Broadway revival of The Little Foxes, and was nominated for a 2017 Tony Award for Best Featured Actor in a Play.[34]

His book of poetry, Glass (1981), was published in a letterpress limited edition by Kenward Elmslie's Z Press.

Thomas married Georgiana Bischoff on November 20, 1994,[35] and they had one son born in 1996. Bischoff has two daughters from previous marriages.[35]