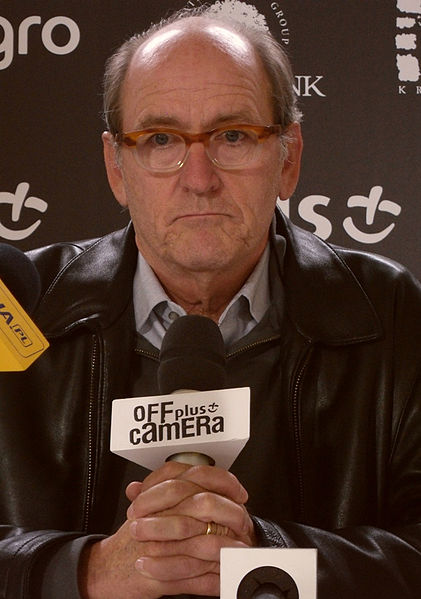 Richard Dale Jenkins (born May 4, 1947) is an American actor. Jenkins began his acting career in theater at the Trinity Repertory Company and later made his film debut in 1974. He has worked steadily in film and television since the 1980s, mostly in supporting roles. His first major role did not come until the early 2000s, when he portrayed the deceased patriarch Nathaniel Fisher on the HBO funeral drama series Six Feet Under (2001-2005). He is also known for his roles in the films Burn After Reading (2008), Step Brothers (2008), Let Me In (2010), and Jack Reacher (2012).

Jenkins was nominated for the Academy Award for Best Actor for the drama film The Visitor (2007).[1] He won the Primetime Emmy Award for Outstanding Lead Actor in a Miniseries or a Movie for the limited drama series Olive Kitteridge (2014). For his performance in the fantasy drama film The Shape of Water (2017), Jenkins received Academy Award, Golden Globe and Screen Actors Guild Award nominations for Best Supporting Actor.

Jenkins was born and raised in DeKalb, Illinois. His mother, Mary Elizabeth (née Wheeler), was a housewife, and his father, Dale Stevens Jenkins, was a dentist.[2][3] He attended DeKalb High School. Before he was an actor, Jenkins drove a linen truck (his boss was actor John C. Reilly's father).[4][5] Jenkins earned a degree in Drama from Illinois Wesleyan University before relocating to Rhode Island.
Read more...

Jenkins worked with the Trinity Repertory Company in Providence, Rhode Island, while breaking into film with a bit part in Feasting with Panthers (1974), a television film about Oscar Wilde. Jenkins was given the option of joining the Screen Actors Guild. Knowing that it was not that easy to join, Jenkins immediately accepted the offer.[6] He continued as a member of Trinity's resident acting company and served as its artistic director from 1990 to 1994.[7]

Although primarily known for supporting parts, Jenkins had a lead role in The Visitor (2007) for which he was nominated for the Independent Spirit Award and an Academy Award for Best Actor.[8] Jenkins won the International Press Academy's Satellite Award for Best Actor - Motion Picture.

In 2010, Jenkins costarred in Dear John, as the father of John Tyree (Channing Tatum), and also co-starred with Julia Roberts and Javier Bardem in Eat Pray Love. In 2012, he appeared in the Joss Whedon and Drew Goddard horror film The Cabin in the Woods and the action film Jack Reacher. He then appeared in the action films White House Down (2013) and Kong: Skull Island (2017).

Jenkins is perhaps best known for playing Nathaniel Fisher in the HBO drama series Six Feet Under. His character is the deceased patriarch of the Fisher family and regularly appears to his family as a ghost or in dreams. He played the role for the show's entire run. He and his castmates received a Screen Actors Guild Award nomination for Outstanding Performance by an Ensemble in a Drama Series in 2002.

Jenkins portrayed a DEA agent in one episode of Miami Vice and a mob boss in a later episode.

In 2015, Jenkins won the Primetime Emmy Award for Outstanding Lead Actor in a Miniseries or Movie for his performance as Henry Kitteridge in the HBO miniseries Olive Kitteridge.[9]

Jenkins and his wife, Sharon R. Friedrick, were married on August 23, 1969. They have two children, son Andrew Dale and daughter Sarah Pamela, and reside in Cumberland, Rhode Island.[3]

In 2014, Jenkins and his wife Sharon received the Pell Award for Lifetime Achievement from Trinity Repertory Company in Providence.[10][11]