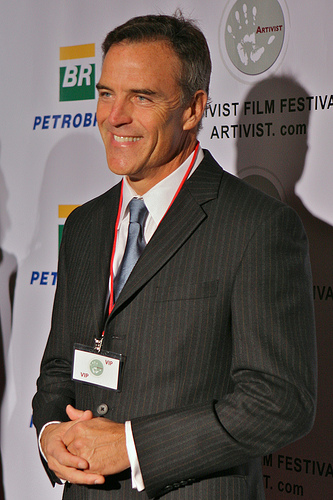 Richard William Burgi (/ˈbɜːrɡi/,[1] born July 30, 1958) is an American film and television actor best known for the roles of Det. Jim Ellison on The Sentinel and as Karl Mayer on Desperate Housewives.

Burgi was born in the suburbs of New York City in Montclair, New Jersey. His family was involved in community theatre.[2] His brother, Chuck Burgi, is a well-known rock drummer who has most recently toured with Billy Joel. After high school, Burgi travelled through the US and Europe, taking odd jobs.[3]
Read more...

Burgi began his career in New York, which led to regular roles on the Manhattan-based daytime soap operas One Life to Live, Another World and As the World Turns. After moving to Los Angeles, he starred on another soap opera, Days of Our Lives. He later received a role on Viper after a string of guest appearances on television shows, including a television film debut in Chameleons in 1989. His first lead role was in the 1994 television series One West Waikiki.[2]

Burgi was cast as the lead in the series The Sentinel, which was cancelled after three seasons, leaving key plot issues unresolved; an intense fan campaign convinced the network to film an additional half-season worth of episodes to end the series properly. He later received recurring roles on The District, 24 and Judging Amy as well as bit parts in other television series and films, including Matlock.[2] In the 1998 made-for-TV remake of the movie I Married a Monster, Burgi starred as Nick Farrell (the monster).

Since 2004, Burgi has appeared on Desperate Housewives playing Karl Mayer, soon promoted to a regular cast member in season two. He also starred in the big-screen thriller Cellular in 2004 as well as a remake of Fun with Dick and Jane and chick flick In Her Shoes as Toni Collette's love interest in 2005. In 2007, Burgi was cast in the horror film Hostel: Part II. In 2009, he played the police officer in Friday the 13th and a stylish doctor in Nip/Tuck.

In 2010, Burgi guest-starred in an episode of Law & Order: Special Victims Unit. In 2011, Burgi guest-starred on TV Land's Hot in Cleveland.[4] In 2011, it was announced that he would play Karl Parker in My Family USA, which premiered on September 26, 2011. In 2011, Burgi gained a new recurring role as CIA hitman Clyde Decker, who is part of a government conspiracy targeting the title character in Chuck. In 2011, Burgi appeared in season 9 of One Tree Hill as Brooke Davis's father. In 2012, he starred in cult classic "Christmas Twister" as TV Reporter 1, in which his character was killed trying to parry away a low flying shipping container. In 2013, Burgi guest-starred on Lifetime's Devious Maids as a brother, uncle, and love interest, Henri.