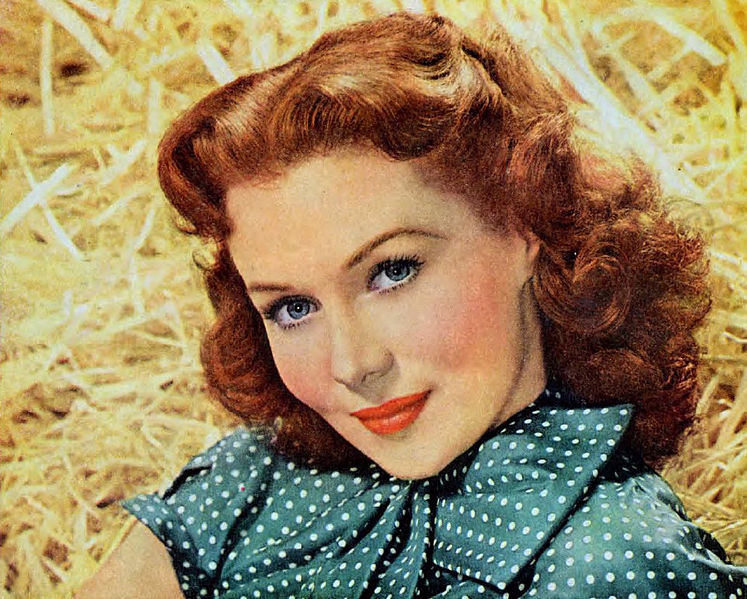 She acted in more than forty films, mostly in the 1940s and 1950s, and became renowned as one of the most glamorous actresses of her day. She was nicknamed the "Queen of Technicolor" because her fair complexion and flaming red hair photographed exceptionally well in Technicolor.[1]

Fleming was born as Marilyn Louis on August 10, 1923 in Hollywood, California, to Harold Cheverton Louis, a non-professional insurance salesman, and Effie Graham, who was a famous model and actress, who appeared opposite Al Jolson at New York's Winter Garden Theater, in the musical Dancing Around, from 1914 to 1915. Her grandfather was John C. Graham, a prominent actor, theater owner and newspaper editor in Utah.[2]

She began working as a film actress while attending Beverly Hills High School,[3] from which she graduated in 1941. She was discovered by the well-known Hollywood agent Henry Willson who changed her name to "Rhonda Fleming".[4]

"It's so weird," Fleming said later. "He stopped me crossing the street. It kinda scared me a little bit -- I was only 16 or 17. He signed me to a seven-year contract without a screen test. It was a Cinderella story. But those could happen in those days."[5]

She received her first substantial role in the thriller Spellbound (1945), produced by Selznick and directed by Alfred Hitchcock.

"Hitch told me I was going to play a nymphomaniac," Fleming said later. "I remember rushing home to look it up in the dictionary and being quite shocked."[8]

The film was popular and Selznick gave her another good role in a thriller, The Spiral Staircase (1946), directed by Robert Siodmak.

Selznick then leant her out to appear in supporting parts in the Randolph Scott western Abilene Town (1946) at United Artists, and the film noir classic Out of the Past (1947) with Robert Mitchum, at RKO.

Fleming auditioned for a part Deanna Durbin turned down, the female lead in a Bing Crosby movie at Paramount, A Connecticut Yankee in King Arthur's Court (1949), a musical loosely based on the story by Mark Twain. Fleming exhibited her singing ability, dueting with Crosby on "Once and For Always" and soloing with "When Is Sometime". She and Crosby recorded the songs for a three-disc, 78 rpm Decca album, conducted by Victor Young, who wrote the film's orchestral score. The movie was Fleming's first Technicolor film.[10][11]

She then played another leading role opposite a comedian, in this case Bob Hope for The Great Lover (1949). It was a big hit and Fleming was established.

"After that I wasn't fortunate enough to get good directors," said Fleming. "I made the mistake of doing lesser films for good money. I was hot - they all wanted me - but I didn't have the guidance or background to judge for myself."[12]

She was John Payne's love interest in The Eagle and the Hawk (1950), a Western.

In February 1949 Selznick had sold his contract players to Warner Bros, but he kept Fleming.[13]

Fleming was loaned to RKO to play a femme fatale opposite Dick Powell in Cry Danger (1951), a film noir. Back at Paramount she played the title role in a Western with Glenn Ford, The Redhead and the Cowboy (1951).[14]

In 1950 she ended her association with Selznick after eight years, even though her current contract with him had another five years to run.[15][16]

Fleming signed a three-picture deal with Paramount.[17] Pine-Thomas used her as Ronald Reagan's leading lady in a Western, The Last Outpost (1951), John Payne's leading lady in the adventure film Crosswinds (1951), and Reagan again in Hong Kong (1951).

She sang on NBC's Colgate Comedy Hour during the same live telecast that featured Errol Flynn, on September 30, 1951, from the El Capitan Theater in Hollywood.[18]

Fleming was top billed for Sam Katzman's The Golden Hawk (1952) with Sterling Hayden, then was reunited with Reagan for Tropic Zone (1953) at Pine Thomas.

In 1953, Fleming portrayed Cleopatra in Katzman's Serpent of the Nile for Columbia. That same year she did a Western with Charlton Heston at Paramount, Pony Express (1953), and two films shot in 3-D, Inferno with Robert Ryan at Fox and the musical Those Redheads From Seattle with Gene Barry, for Pine-Thomas.

The following year she starred with Fernando Lamas in Jivaro, her third 3-D release, at Pine-Thomas. She went to Universal for Yankee Pasha (1954) with Jeff Chandler. Fleming went to Italy to play Seriramis in Queen of Babylon (1954).

Much of the outdoor location work for Fleming's appearance in the 1955 Western Tennessee's Partner, in which she played Duchess opposite John Payne as Tennessee and Ronald Reagan as Cowpoke, was filmed at the storied Iverson Movie Ranch in Chatsworth, California, known as the most heavily filmed outdoor location in the history of the movies and television. She was filmed riding a horse over the movie ranch's rocky terrain, and one of those rocks, a distinctive monolithic sandstone feature behind which Fleming, as Duchess, hid during an action sequence, later became known as Rhonda Fleming Rock. The rock remains in place today and is part of a section of the former movie ranch known as Garden of the Gods, which has been preserved as public parkland.[19]

Fleming was reunited with Payne and fellow redhead Arlene Dahl in a noir at RKO, Slightly Scarlet (1956). She did other thrillers that year: The Killer Is Loose (1956) with Joseph Cotten, and Fritz Lang's While the City Sleeps (1956), co-starring Dana Andrews, at RKO. Fleming was top billed in an adventure movie for Warwick Films, Odongo (1956).

Fleming had the female lead in John Sturges’s Gunfight at the O.K. Corral (1957) co-starring Burt Lancaster and Kirk Douglas, a big hit. She supported Donald O'Connor in The Buster Keaton Story (1957) and Stewart Granger in Gun Glory (1957) at MGM.[16]

In May 1957 Fleming launched a nightclub act at the Tropicana in Las Vegas. It was a tremendous success. "I just wanted to know if I could get out on that stage - if I could do it. And I did! ... My heart was to do more stage work. But I had a son, so I really couldn't. But that was in my heart."[20]

Fleming was Guy Madison's co star in Bullwhip (1958) for Allied Artists, and supported Jean Simmons in Home Before Dark (1959), which she later called her favorite role ("It was a marvellous stretch," she said[8]).

Fleming was reunited with Bob Hope in Alias Jesse James (1959) and did an episode of Wagon Train.[21] She was in the Irwin Allen/Joseph M. Newman production of The Big Circus (1959), co-starring Victor Mature and Vincent Price. This was made for Allied Artists who Fleming later sued for unpaid profits.[22]

Fleming went to Italy to make The Revolt of the Slaves (1959) and was second billed in The Crowded Sky (1960).

In 1960 she described herself as "semi-retired" - by this stage she had made money in real estate investments. That year she toured her nightclub act in Las Vegas and Palm Springs.[20][23]

During the 1950s and into the 1960s, Fleming frequently appeared on television with guest-starring roles on The Red Skelton Show, The Best of Broadway, The Investigators, Shower of Stars, The Dick Powell Show, Death Valley Days, Wagon Train, Burke's Law, The Virginian, McMillan & Wife, Police Woman, Kung Fu, Ellery Queen, and The Love Boat.

On March 4, 1962, Fleming appeared in one of the last segments of ABC's Follow the Sun in a role opposite Gary Lockwood, who was nearly 14 years her junior. She played a Marine in the episode "Marine of the Month".

In 1958, Fleming again displayed her singing talent when she recorded her only LP, entitled simply Rhonda (reissued in 2008 on CD as Rhonda Fleming Sings Just For You). In this album, which was released by Columbia Records, she blended then current songs like "Around The World" with standards such as "Love Me Or Leave Me" and "I've Got You Under My Skin". Conductor-arranger Frank Comstock provided the musical direction. One of her final film appearances to date was a bit-role as Edith von Secondburg in the 1980 comedy The Nude Bomb (starring Don Adams).

In the 1960s Fleming branched out into other businesses and began performing regularly on stage and in Las Vegas.[24]

Fleming has a star on the Hollywood Walk of Fame.[26] In 2007, a Golden Palm Star on the Palm Springs Walk of Stars was dedicated to her.[27]

Fleming has worked for several charities, especially in the field of cancer care, and has served on the committees of many related organizations. In 1991, she and her fifth husband, Ted Mann, established the Rhonda Fleming Mann Clinic For Women's Comprehensive Care at the UCLA Medical Center.[25]

Joining Fleming and Eisley at the rally were Walter Brennan, Lloyd Nolan, Dale Evans, Pat Boone, and Gloria Swanson. Fleming declared, "Project Prayer is hoping to clarify the First Amendment to the Constitution and reverse this present trend away from God."[28] Eisley and Fleming added that John Wayne, Ronald Reagan, Roy Rogers, Mary Pickford, Jane Russell, Ginger Rogers, and Pat Buttram would also have attended the rally had their schedules not been in conflict.[28]

Fleming has been married six times:[29]

From her son Kent Lane (b. 1941), Rhonda also has two granddaughters (Kimberly and Kelly) and four great-grandchildren (Wagner, Page, Lane and Cole).[30][31]