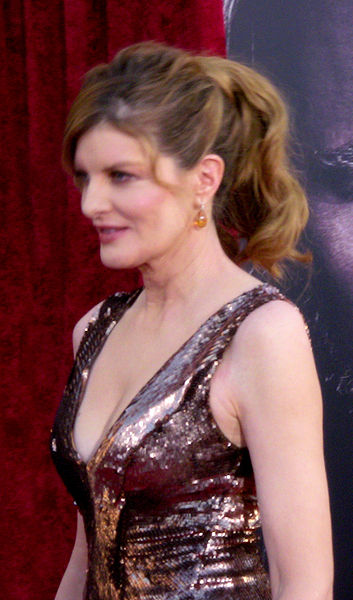 Russo appeared as Frigga, the mother of the titular hero in the superhero films Thor (2011) and Thor: The Dark World (2013). In 2014, Russo co-starred in the crime thriller film Nightcrawler, for which she received critical praise, won the Saturn Award for Best Supporting Actress and was nominated for the BAFTA Award for Best Actress in a Supporting Role.[3] She appeared in the 2015 comedy film The Intern and starred in the action comedy Just Getting Started, which was released in December 2017.

Russo was born in Burbank, California, the daughter of Shirley (née Balocca), a factory worker and barmaid, and Nino Russo, a sculptor and car mechanic who left the family when Russo was two.[1][4][5] Her father was of Italian descent, while her mother had Italian, German, and English ancestry.[6][7][8] Russo grew up with her sister, Toni (who would later marry songwriter Bernie Taupin), and attended Burroughs High School (where her classmates included director Ron Howard), dropping out in the tenth grade. She began taking a variety of part-time jobs to help her family, including working in an eyeglass factory and as a movie theater cashier.
Read more...

Russo started a modeling career after allegedly being spotted at a 1972 Rolling Stones concert by John Crosby, an agent from International Creative Management.[citation needed] With his encouragement, Russo applied to, and was signed by, Ford Modeling Agency. Russo was one of the top models of the 1970s and early 1980s,[9] appearing on magazine covers for Vogue, Mademoiselle, and Cosmopolitan, as well as advertisements for perfume and cosmetics.

As she entered her 30s, demand for her as a model began to dwindle. She did a few more commercials and then turned her back on modeling and show business for a while. She studied theater and acting, and began appearing in theater roles at small theaters in Los Angeles and elsewhere in California. At one point, she took acting lessons from veteran actor Allan Rich. They were interviewed on CNN in 1980.

She made her television debut in 1987 with a supporting role in the short-lived ABC television series Sable, based on the comic book, Jon Sable: Freelance by Mike Grell. She made her feature film debut in 1989 as the girlfriend of Tom Berenger's character in Major League, a comedy written and directed by David S. Ward. In 1990, she played the supporting role of the wife of Jim Belushi's character in the comedy film Mr. Destiny. In 1991, she had the female lead in the crime drama One Good Cop. She later starred in the science fiction film Freejack, which received mostly negative reviews from critics, but Russo was nominated for the Saturn Award for Best Supporting Actress for her performance.

In 1992, she achieved breakout success with her role as internal affairs detective Lorna Cole in the action film Lethal Weapon 3.[10] The movie was a box office success, grossing over $320 million worldwide.[11] In later years, she had major roles in a number of box office hits and critically successful movies. In 1993, she starred with Clint Eastwood in the thriller film In the Line of Fire, directed by Wolfgang Petersen. In 1995, Petersen cast her in the medical disaster film Outbreak with Dustin Hoffman. The film also had box office success, grossing $189 million worldwide.[11] Also in 1995, she appeared in Get Shorty, a crime-comedy directed by Barry Sonnenfeld. In 1996, she starred in the romantic comedy Tin Cup with Kevin Costner and the crime thriller Ransom, directed by Ron Howard.

In 1997, Russo had the leading role of Gertrude Lintz in the comedy film Buddy. The film received negative reviews from critics, and grossed only $10 million in US.[11][12] In 1998, she appeared in Lethal Weapon 4, the final film in the series. In 1999, she starred with Pierce Brosnan in the heist film The Thomas Crown Affair directed by John McTiernan. The film received generally positive reviews and was successful at the box office, grossing $124,305,181 worldwide.[11] Kenneth Turan in his review said: " smart, gritty performance is the best thing about this remake of the stylish caper movie 'Thomas Crown.'"[13] In 2000, she appeared in the live-action/animated film of The Adventures of Rocky and Bullwinkle, a box office bomb.

In 2002, Russo appeared with Tim Allen in the comedy film Big Trouble based on the novel by Dave Barry. Big Trouble was originally scheduled for release on September 21, 2001 and had a strong advertising push. The events of September 11 of that year cast a pall over the movie's comedic smuggling of a nuclear device onto an airplane. Consequently, the film was pushed back until April 2002, and the promotion campaign was toned down almost to the point of abandonment. The film came quietly to American theaters and left quickly afterwards, receiving mixed reviews and being generally ignored by audiences, becoming a box office bomb. Earlier in the same year, she appeared with Robert De Niro in Showtime. She starred in and produced Two for the Money, a 2005 film starring Al Pacino and Matthew McConaughey. In 2005, Russo starred with Dennis Quaid in the family comedy film Yours, Mine and Ours. The film received negative reviews from critics, but was success at the box office, grossing $72,028,752 worldwide.[11] In 2011, six years after resting from acting, she appeared in the superhero film Thor as Frigga, the mother of the titular hero.[14] Most of her scenes were removed in editing. She said that "Anthony Hopkins and I were each cut out".[15] She reprised the role in 2013's Thor: The Dark World in which she received more screen time.

In 2014, Russo appeared with Jake Gyllenhaal in the critically acclaimed crime thriller film Nightcrawler, written and directed by her husband Dan Gilroy.[16] A film critic from Indiewire in his review said: "Russo is an integral part of the narrative and she gives as good as she gets. The role is easily her finest in several years and the rich material uncorks a wealth of inventiveness from the actress. There’s not a lot of imaginatively drawn roles for aging women, but Russo sinks her teeth into the role of a coldblooded vampiress protective of her own uncertain hold in the newsroom."[17][18] She also had the leading role in the independent film Frank and Cindy.[19] She also co-starred with Robert De Niro in the 2015 comedy The Intern directed by Nancy Meyers.[20] In 2017, she starred with Morgan Freeman and Tommy Lee Jones in comedy film Just Getting Started.[21]

Russo has been married to screenwriter Dan Gilroy since March 14, 1992. They have one daughter, Rose (born August 31, 1993), and live in Brentwood, California. Her sister Toni was married to lyricist Bernie Taupin in the 1980s, and Russo appeared with her sister in the 1987 video for Taupin's song "Citizen Jane".