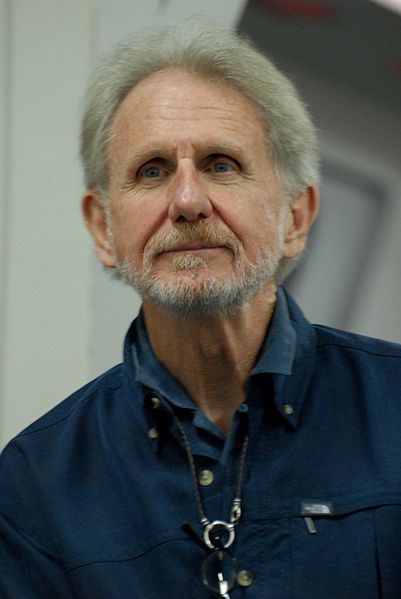 In films, Auberjonois has portrayed Father Mulcahy in MASH (1970), and Chef Louis in The Little Mermaid (1989), in which he sang "Les Poissons". In the American animated musical comedy film Cats Don't Dance (1997), Auberjonois lent his voice as Flanagan, the human film director of "Li'l Ark Angel".

In various long-running television series, Auberjonois portrayed a number of characters, including: Clayton Endicott III on Benson (for which he was nominated for an Emmy Award), Odo on Star Trek: Deep Space Nine, and Paul Lewiston on Boston Legal.

He has also branched out into voice acting for video games, having appeared in a number of popular video games. He portrayed the Greek mythological figure Talos in the first God of War (2005) game, the enigmatic Mr. House in Fallout: New Vegas (2010), and Karl Schafer in the Uncharted video game series.

Auberjonois has a sister and a brother, and two half-sisters from his mother's first marriage.[4] His family moved to Paris, France, after World War II, where at an early age he decided to become an actor.[3]

After a few years in France, the family moved back to the United States and joined an artists' colony in Rockland County, New York, whose residents included Burgess Meredith, John Houseman, and Helen Hayes. The Auberjonois family also lived in London, United Kingdom, where Auberjonois completed high school while studying theatre. To complete his education, he attended and graduated from the Carnegie Institute of Technology (now Carnegie Mellon University) in 1962.[5]

After college, Auberjonois worked with several different theatre companies, beginning at the prestigious Arena Stage in Washington, D.C., and then he traveled between Los Angeles, California, and New York, working in numerous theatre productions. He helped found the American Conservatory Theatre in San Francisco, the Mark Taper Forum in Los Angeles, and the Brooklyn Academy of Music Repertory Company in New York. He was a member of the Peninsula Players summer theater program during the 1962 season.[6]

In 1968, Auberjonois landed a role on Broadway, and appeared in three plays simultaneously: as Fool to Lee J. Cobb's King Lear (the longest running production of the play in Broadway history), as Ned in A Cry of Players (opposite Frank Langella), and as Marco in Fire! In 1969, he earned a Tony Award for his performance as Sebastian Baye alongside Katharine Hepburn in Coco.[7]

He received Tony nominations for his roles in Neil Simon's The Good Doctor (1973) opposite Christopher Plummer; as the Duke in Big River (1984), winning a Drama Desk Award; and, memorably, as Buddy Fidler/Irwin S. Irving in City of Angels (1989), written by Larry Gelbart and Cy Coleman.[7]

Other Broadway appearances include Malvolio in Twelfth Night (1972); Scapin in Tricks (1973); Mr. Samsa in Metamorphosis (1989); Professor Abronsius in Dance of the Vampires (musical), the English-language version of Jim Steinman's musical adaptation of Tanz der Vampire; and Jethro Crouch in Sly Fox (2004), for which he was nominated for an Outer Critics Circle Award.[citation needed]

Auberjonois has appeared many times at the Mark Taper Forum, notably as Malvolio in Twelfth Night and as Stanislavski in Chekhov in Yalta. As a member of the Second Drama Quartet, he toured with Ed Asner, Dianne Wiest, and Harris Yulin. He appeared in the Tom Stoppard and André Previn work, Every Good Boy Deserves Favor, at the Kennedy Center in Washington, D.C., and the Metropolitan Opera in New York.[citation needed]

Auberjonois has directed many theatrical productions, and has starred in the Washington D.C. production of 12 Angry Men (2004), where he portrayed "Juror #5" to Roy Scheider's "#8" and Robert Prosky's "#3". He made his debut at the Shakespeare Theatre Company in Washington, D.C., as the titular character in Molière's The Imaginary Invalid through July 27, 2008.

Auberjonois was on the advisory board of Sci-Fest, the first annual Los Angeles Science Fiction One-Act Play Festival, held in May 2014.[8]

Auberjonois portrayed the character of Straight Hollander in the 1993 Miramax film The Ballad of Little Jo. He voiced Professor Genius in Little Nemo: Adventures in Slumberland, Louis the Chef in the 1st and 2nd Little Mermaid films, Flanagan in Cats Don't Dance, the Butler in Joseph: King of Dreams, and the concierge in Planes: Fire & Rescue.

In addition to having been a regular actor on three TV shows (Benson, a situation comedy; Star Trek: Deep Space Nine in science fiction; and Boston Legal, a legal dramedy), Auberjonois has been a guest star on many television series, including: Ellery Queen, Family, Grey's Anatomy, The Rockford Files, Charlie's Angels, Starsky & Hutch, Wonder Woman, Harry O, The Jeffersons, The Outer Limits, Night Gallery, Hart to Hart, Matlock, Murder, She Wrote, The Bionic Woman, Frasier, Judging Amy, Chicago Hope, The Bob Newhart Show, Star Trek: Enterprise, Stargate SG-1, Warehouse 13, Archer, L.A. Law, The Practice (for which he received an Emmy nomination, playing a different character than the one he has played on The Practice spinoff Boston Legal), Saving Grace, It's Always Sunny in Philadelphia, Criminal Minds, NCIS, The Good Wife, The Librarians, and Madam Secretary.

His television movie credits include The Rhinemann Exchange, The Dark Secret of Harvest Home, Disney's Geppetto, Gore Vidal's Billy The Kid, the remake of A Connecticut Yankee in King Arthur's Court, and the Sally Hemings: An American Scandal (2000) miniseries. He portrayed the character, Fortunato, in an episode of American Masters entitled "Edgar Allan Poe: Terror of the Soul" (1995). He received a third Emmy Award nomination for his performance in ABC's The Legend of Sleepy Hollow. He played NASA scientist, Dr. Felix Blackwell, in the episode "Phoenix" on NCIS.

Auberjonois has voiced animated roles, including characters on Snorks, Batman: The Animated Series, Leonard McLeish on Pound Puppies (2010), Avatar the Last Airbender, Master Fung in the first episodes of Xiaolin Showdown (before being replaced by Maurice LaMarche), Azmuth on Ben 10 Omniverse, Renard Dumont on The Legend of Tarzan, Justice League Unlimited, Max Steel, Fantastic Max, Challenge of the Gobots, Archer, Young Justice, Random! Cartoons, and Avengers Assemble. He lent his voice talents to the 2001 Public Broadcasting System (PBS) American Experience documentary, "Woodrow Wilson", as the title character, along with the 2003 PBS historical documentary Kingdom of David: The Saga of the Israelites.

Auberjonois has been active in radio drama. He read "The Stunt" by Mordechai Strigler for the NPR series Jewish Stories From the Old World to the New, and he has recorded novels on tape. On PRI, he has been featured numerous times on Selected Shorts, reading works of dramatic fiction. His voice was heard in Disney's The Little Mermaid (receiving alphabetical top billing as Chef Louis and singing "Les Poissons"), and as The Skull in The Last Unicorn.

He did voice work on the Challenge of the GoBots series in 1980s as Dr. Braxis, He was the voice of Peter Parker on the 1972 Buddah Records Spider-Man LP "From Beyond the Grave" (BDS 5119), a radio-style narrative replete with sound effects and rock and roll song interludes provided by "The Webspinners", in which the characters of The Vulture, The Lizard, The Green Goblin, The Kingpin, Aunt May and Doctor Strange appeared.

In 1984-85, he lent his voice to Desaad, an associate of the villainous Darkseid on the animated series, Super Friends. From 1986-87, he voiced Alvinar in the cartoons series Wildfire. He also provided the voice of Professor Genius in Little Nemo: Adventures in Slumberland.

He provided the voice for Janos Audron, an ancient vampire in the Legacy of Kain video game series; he was in Soul Reaver 2, Blood Omen 2, and Legacy of Kain: Defiance. He provided the voice of Angler in the Pirates of the Caribbean: At World's End video game. He voice-played General Zod in the Joseph Ruby-Kenneth Spears animated Superman series episode titled "The Hunter".

Auberjonois provided minor character voices for Justice League, reprising his role as Desaad, and parts such as 2003's "In Blackest Night", as Kanjar-Ro, a pirate testifying in the trial of the Green Lantern, and as a fellow member of the Green Lantern Corps in other episodes.

In 2003, he provided the voice of Katori in the English dubbed version of semi-sequel to the Hayao Miyazaki film Whisper of the Heart, The Cat Returns. He reprised an animated version of his character Odo from Star Trek: Deep Space Nine in a cutaway joke in Family Guy's Stewie Griffin: The Untold Story. The cutaway featured a more humanoid-faced Odo threatening Stewie's alleged cousin Quark Griffin. Auberjonois also lent his voice to Skylanders: SuperChargers.[9]

In 2011, he voiced villain Mark Desmond in Cartoon Network's Young Justice, is the voice of Leonard Mcleish in the Pound Puppies series, and is the current voice of Pepé Le Pew in the Looney Tunes Show in 2011, Azmuth in Ben 10 Omniverse, and Ebony Maw in Avengers Assemble.[10]

One of Auberjonois's earliest forays into video game voice acting was the role of Janos Audron in Soul Reaver 2; he continued to voice the character in subsequent releases in the Legacy of Kain series. According to a behind-the-scenes featurette in Soul Reaver 2, showing candid discussions among the voice actors during recording, he was surprised at the quality of the writing, asking, "This is for a video game?!" when the purpose of the recordings was brought to light.

More recently, Auberjonois provided the voice of Karl Schäfer, the honourable German explorer in the video game Uncharted 2: Among Thieves, and Mr. House, the reclusive New Vegas casino owner in the 2010 video game Fallout: New Vegas. He also voices Dr. Ignatio Mobius in Command and Conquer: Renegade. He reprised his role as Odo in the game Star Trek: Deep Space Nine: The Fallen. In June, 2018 he will reprise his role as Odo in the MMORPG game Star Trek Online [11]

He has been married to his wife Judith since 1963. They have two children, Tessa and Remy, and three grandchildren.