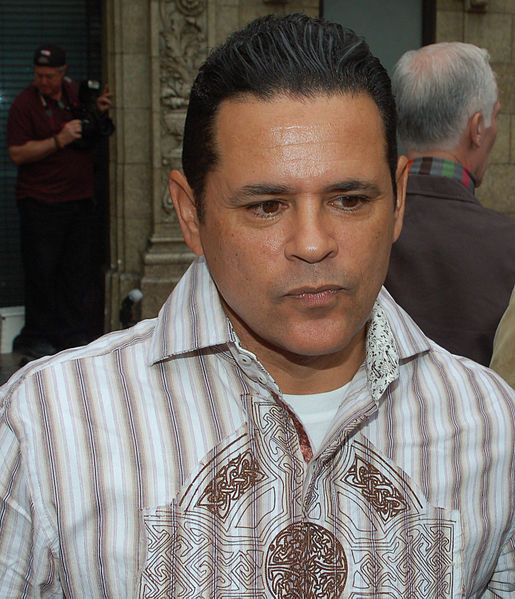 Raymond Cruz (born July 9, 1961) is an American actor, best known for his starring role as Detective Julio Sanchez in the series The Closer and his recurring role as the drug lord Tuco Salamanca in the crime drama Breaking Bad and its spin-off Better Call Saul. He also starred on the series Major Crimes, a spinoff of The Closer, reprising the role of Sanchez.[1]

Cruz attended East Los Angeles College. Of Mexican descent, he grew up in a neighborhood that regularly saw gang activity, a reality he brings to his roles, particularly as Sanchez and a range of gang-affiliated characters.[2] [3]

Cruz has said that becoming interested in American literature early in life helped him avoid joining such gangs himself.[4]

His film roles include Ding Chavez in Clear and Present Danger, Hector in "Out For Justice", Tom Berenger's second-in-command Joey Six in The Substitute, U.S. Marine Sergeant Rojas in The Rock, as Jesus in From Dusk Till Dawn 2: Texas Blood Money, USM Private Vincent DiStephano in Alien: Resurrection, and Ramirez in Under Siege. He appeared as Chuey, a gang member from the Vatos Locos, in the gang film Blood In Blood Out. In 2005, he played Chino in Havoc. He appeared in Gremlins 2: The New Batch, credited as "The Messenger," and in Training Day as a gang member named Sniper. He played a Los Angeles firefighter in Collateral Damage. He had guest roles in the Star Trek: Deep Space Nine episode "The Siege of AR-558", the X-Files episode "El Mundo Gira", and the second season of 24. He also made an appearance as the father of a murdered girl in CSI. He played a short-lived but well-known role as Tuco Salamanca, a sadistic and sociopathic meth dealer in Breaking Bad in 2008 and 2009. He later reprised the role of Tuco in the Breaking Bad spin-off, Better Call Saul. He had a recurring role as Paco on My Name Is Earl, and as Alejandro Perez on Nip/Tuck.

Report a problem
Write to Raymond Cruz at FanPal • 2021