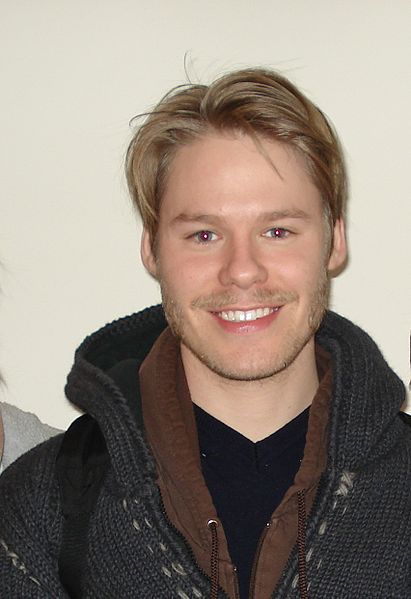 Randolph Clarke Harrison[1] (born November 2, 1977)[1] is an American actor best known for his portrayal of Justin Taylor on the Showtime drama Queer as Folk.

Harrison was born in Nashua, New Hampshire, but moved to Alpharetta, Georgia with his family at age eleven.[2] He attended Pace Academy, a private prep school in Atlanta.[3] His father is an executive with a large paper company, while he has described his mother as a "thwarted artist."[4] His only sibling, an older brother, is a bank manager.[4]

Harrison attended the University of Cincinnati's College-Conservatory of Music (CCM), graduating with a Bachelor of Fine Arts degree in musical theatre. During his time at CCM, Harrison starred in university productions such as Hello Again, Shopping and Fucking, and Children of Eden. He also had roles in other theatrical venues across the U.S., in productions such as Violet at the Ensemble Theatre of Cincinnati, 1776 at the St. Louis Municipal Theatre and West Side Story at the Forestburg Playhouse, as well as productions of A Midsummer Night's Dream, The Real Inspector Hound and A Cheever Evening.

Harrison made his television debut playing Justin Taylor, a gay teen, in 2000's American version of Queer as Folk, based on the British television series. The series ran for five seasons, ending in 2005. In 2002, Harrison played the character Sean in Bang Bang You're Dead, a made-for-television movie based on the play of the same name. Harrison stars as Brutus in cinematographer/director/writer Patrick Donelley's postmodern feature film adaptation of Julius Caesar opposite actor John Shea as the title role.

In 2002, Harrison starred in the play Deviant at the New York International Fringe Festival. In summer 2004, Harrison made his Broadway debut as Boq in the musical Wicked. His Off Broadway credits include A Letter for Ethel Kennedy (MCC Theatre, 2002), the Father in Oak Tree (Perry Street Theatre, 2006), Young Spencer in Edward II (Red Bull Theatre, 2007-08),Eros in Antony and Cleopatra (Theatre for a New Audience, 2008), Laszlo Fickes/Gerhardt Zeitzler in A Singing Forest (Public Theatre, 2009), and Kevin Adams-Weller in Harbor (Primary Stages, 2013). Harrison has also done several staged readings for Red Bull Theatre and starred in their "In the Raw" workshop production of A Tyger's Heart in February 2011.

Harrison has a substantial résumé in regional theatre, most prominently as a featured player since 2005 at the Berkshire Theatre Festival. Roles with BTF include Alan Strang in Equus (2005), the title role in Amadeus (2006), Bill Bibbit in One Flew Over the Cuckoo's Nest (2007), Frank Gardner in Mrs. Warren's Profession (2007), Lucky in Waiting for Godot (2008), Osvald Alving in Ghosts (2009), Nagg in Endgame (2010), and the title character in The Who's "Tommy" (2011). Other regional theatre credits include Lysander/Thisbe/Cobweb in the Alabama Shakespeare Festival production of A Midsummer Night's Dream, presented in spring 2006 by the SITI Company (where Harrison has studied extensively through Skidmore College and in Manhattan); Tom in the Guthrie Theater's production of The Glass Menagerie (2007); Andy Warhol in the Yale Repertory Theatre's production of Pop! (2009); Sebastian in the Shakespeare Theatre Company's production of Twelfth Night (2010); Tim in the Studio Theatre's production of Habit of Art; and Ken in the George Street Playhouse's production of Red (2012).

In 2006, Harrison co-founded the Arts Bureau (tAB), an umbrella organization encompassing theatre, film, music, and writing. In July 2007, he starred in tAB's first production, a heartwarming story, ultimately, based on the work of Anton Chekhov. In late 2007/early 2008, Harrison shot and starred in the first tAB short film,Thinking, which has been shown at several film festivals. In Summer 2008, tAB shot its first feature film Lorton Lake.

Harrison, who is openly gay, dated Advertising Age columnist Simon Dumenco from 2002 to 2008; the two met when Dumenco interviewed Harrison for a New York magazine cover story.[5][6][7] As of December 2009, Harrison lives in Williamsburg, Brooklyn with his cats Ella and Aggie.[8]