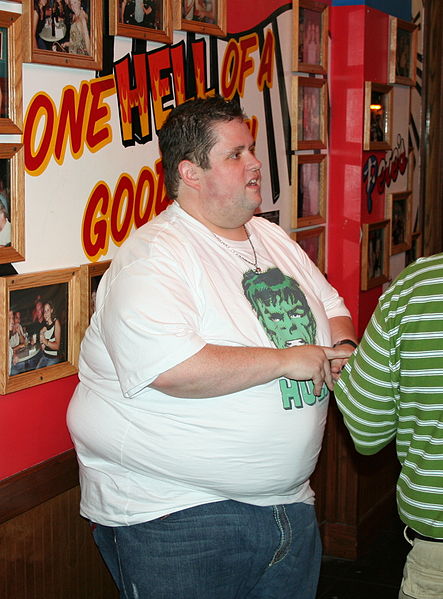 Ralph Duren May (February 17, 1972 - October 6, 2017) was an American stand-up comedian and actor, known for his extensive touring and comedy specials on Netflix and other outlets.

May was born on February 17, 1972, in Chattanooga, Tennessee,[1] and raised in Clarksville, Arkansas,[2] the youngest of 4 children.

At 17, he won a contest to open for Sam Kinison, whom he considered his idol.[3] Kinison suggested that May move to Houston to further develop his comedy routine.[4] May graduated from the High School for the Performing and Visual Arts. He then moved to Los Angeles to pursue a career in the entertainment industry.[5]

In 2003, May was chosen to participate in the first season of Last Comic Standing. He finished in second place in the competition, with Dat Phan winning first place. Afterwards, May appeared in comedy shows, such as The Wayne Brady Show and The Tonight Show with Jay Leno. In 2005, he was the only white comedian on The Big Black Comedy Show, which also featured Mo'Nique, Rodman, and Vince Morris.[6]

On July 3, 2005, May married comedian Lahna Turner. The couple had two children: daughter April June May[12][13] and son August James May.[14][13] The couple filed for divorce in October 2015 and sought physical and joint custody of their children, but the divorce was never finalized.[15]

In November 2011, he suffered a nearly-fatal pulmonary embolism after contracting serious pneumonia on a cruise ship, where a blood clot from his leg became lodged in an artery.[17]

May discussed his grandmother in a number of interviews and credited her with helping take care of him and his siblings as they were growing up. Speaking to the Arkansas Times in 2012, May said, "Thank goodness for my grandmother, she was a hell of a woman. She was really beneficial, she kept us in a stature way above our means and made sure we were taken care of as far as clean clothes and shoes." His Facebook bio also references his grandmother. "When I was a kid, my grandmother taught me how to crochet and how to quilt, and that's kind of how I do an act. I have one-liners, I have dirty jokes, but I also have long stories that are 10 or 20 minutes long and the laughs come every eight seconds. It's a different set. And it's a different life than most people have led."

In an interview with the Arkansas Times in 2012, he discussed growing up in Clarksville, shedding light on some of the hardships he faced. He shared, "It was a hard life growing up. It was a similar story to a lot of people in Arkansas. My mom was a florist. I'm the youngest of four. My father and mother hated each other, and they took it out on us. She'd sue him for not paying child support, then he didn't pay, and that ended up costing us a lot..."

In 2013, May and his wife Turner started a podcast together called Perfect 10.

His memoir, This Might Get a Little Heavy, was published in December 2017.[18]

On October 6, 2017, May went into cardiac arrest. May had been battling pneumonia for several weeks and had cancelled previous shows over the last month, his publicist Stacey Pokluda confirmed following his death. He was 45 years old and is survived by his estranged wife and two children.[19][20] It was later published that hours before his death, May was scheduled to do a meet-and-greet after his final performance at Harrah's in Las Vegas around midnight, but May had already shown signs of his deteriorating condition.[21]

Report a problem
Biography of Ralphie May at FanPal • 2021