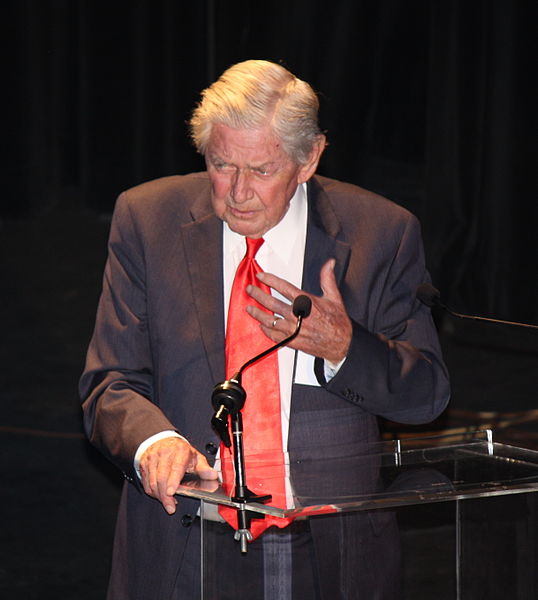 Waite, the eldest of five children, was born in White Plains, New York on June 22, 1928, to Ralph H. Waite, a construction engineer, and Esther (née Mitchell) Waite.[2] Too young for World War II, Waite served in the U.S. Marine Corps from 1946 to 1948, then graduated from Bucknell University in Lewisburg, Pennsylvania. He worked briefly as a social worker. Waite earned a master's degree from Yale University's Divinity School and was an ordained Presbyterian minister and religious editor at Harper & Row, New York before deciding on an acting career.[3] He was a member of the Peninsula Players summer theater program during the 1963 season.[4]

Waite made his Broadway debut in Blues for Mister Charlie, and would work on and off-Broadway steadily throughout the 1960s.[5]

His film work included roles in Cool Hand Luke, Five Easy Pieces, Lawman, The Grissom Gang, Chato's Land and The Stone Killer. His later films included The Bodyguard, the part of Frank the helicopter pilot in the 1993 film Cliffhanger and as the mysterious Time Traveller in the Science Fiction Historical Drama film Timequest (2002).[6] He also voiced Shadow in Homeward Bound II.

Waite scored a personal triumph when he created the role of Will Kidder in the Pulitzer Prize-winning The Young Man from Atlanta, by playwright Horton Foote, in 1995.[7]

Waite was married three times, two marriages ending in divorce. He had three daughters from his first marriage. His eldest daughter, Sharon Waite, died of leukemia when she was 9 years old in 1964.[8] Liam Waite, one of Waite's stepsons, is also an actor. After 50 years away from organized religion, Waite returned in 2010 and became an active member of Spirit of the Desert Presbyterian Fellowship in Palm Desert, California.[3]

Waite ran unsuccessfully for Congress in California as a Democrat on three occasions: In 1990, he challenged veteran GOP incumbent Al McCandless in the Riverside County-based 37th district, losing by five percentage points. In 1998, Waite ran in the special election for the then-Palm Springs-based 44th district left vacant by the death of incumbent Sonny Bono.[9] He was defeated in that election by Mary Bono, Sonny's widow, and lost to her again that November.[10]

On October 21, 1991, Waite introduced then-former California Governor Jerry Brown prior to the latter's speech announcing his candidacy for the 1992 Democratic presidential nomination.[11]

Report a problem
Biography of Ralph Waite at FanPal • 2021