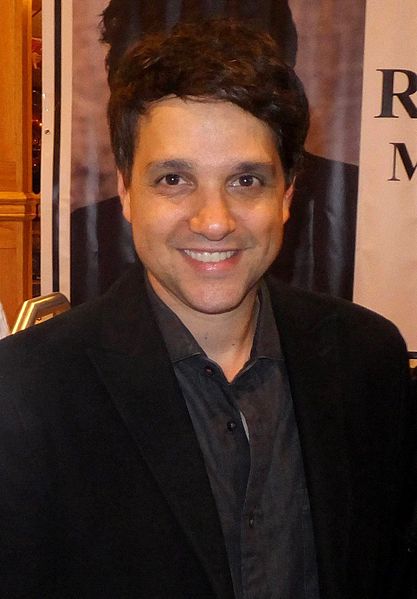 Ralph George Macchio Jr. (/ˈmɑːtʃioʊ/; born November 4, 1961) is an American actor, known for his roles as Daniel LaRusso in The Karate Kid and Cobra Kai, Eugene Martone in Crossroads, Bill Gambini in My Cousin Vinny, and Johnny Cade in The Outsiders. Additionally, he competed on the twelfth season of Dancing with the Stars.

Macchio was born in Huntington, New York.[1] He is the son of Rosalie (née DeSantis) and Ralph Macchio, Sr., who owned a ranch.[2][3] His father is of half Greek[4] and half Italian descent, and his mother is of Italian ancestry.[5] In a 1980 screen test, Macchio stated his family is from Naples.[6]
Read more...

Macchio at the Chiller Theatre Expo in New Jersey, October 2013

Macchio first appeared on American television commercials for products such as Bubble Yum and Dr Pepper. His on-screen debut was in the 1980 film Up the Academy, and his first major role was playing Jeremy Andretti in the television series Eight Is Enough. In 1983, he appeared as Johnny Cade in The Outsiders alongside many young actors who had yet to become major stars, such as C. Thomas Howell, Tom Cruise, Emilio Estevez, Patrick Swayze, Rob Lowe, and Matt Dillon. In 1984, Macchio became known internationally following the release of the first Karate Kid film. Playing high school senior Daniel LaRusso, Macchio was actually in his early twenties when the film was made. He continued this success with the film's sequels, The Karate Kid Part II and The Karate Kid Part III. In the mid-1980s, Macchio's face began appearing on the covers of many teen "bubblegum" magazines such as Tiger Beat, 16, and Teen Beat. Macchio appeared in the 1986 film Crossroads, portraying music student Eugene Martone. In 1992, he starred opposite Joe Pesci and Marisa Tomei in the hit comedy My Cousin Vinny, playing Billy Gambini, who was wrongfully accused of murder while passing through a small Alabama town.

In 1993, Macchio portrayed Chris, the sexually confused best friend of Eric Stoltz's character, in the indie film Naked in New York, along with such notable actors as Mary-Louise Parker, Jill Clayburgh, Kathleen Turner, and Tony Curtis. In 1996, Macchio performed the lead role of J. Pierrepont Finch in the U.S. tour revival of the 1962 Tony Award-winning musical How to Succeed in Business Without Really Trying, and received positive reviews. Referring to his performance as a chorister in a high school production of the same musical, Macchio said, "I was known as the 'Dancing Kid,' not that I was all that great. But I had been dancing since the age of three, taking lessons at the June Claire School of Dance in Babylon, Long Island."[7][8] Since the mid-1990s, Macchio's film appearances have been occasional cameo or supporting roles, notably and recently A Good Night to Die and Beer League.

In 2005, Macchio played himself in the HBO series, Entourage. On May 1, 2007, Macchio played himself in an episode of the Starz series, Head Case. In 2008, he appeared in a VitaminWater commercial that featured NASCAR driver Carl Edwards. Macchio was depicted as Edwards' "spiritual advisor" and dressed in his Karate Kid clothes. Since October 2008, he has appeared in several episodes of the ABC Network television series Ugly Betty as Archie Rodriguez, a local politician, with a semi-regular role as Hilda's love interest on the show. As of November 2008, Macchio was ranked No. 80 among VH1's 100 Greatest Teen Stars.[9]

In June 2010, Macchio appeared in Funny or Die's online short, "Wax On, F*ck Off", in which his loved ones stage an intervention to turn the former child star from a well-adjusted family man into an addict besieged with tabloid scandal, all in order to help his career. During the video Macchio reacts to seeing a poster for the 2010 Karate Kid remake.[10] A recurring joke in the sketch is that Macchio is confused for an adolescent. The short was lauded by TV Guide's Bruce Fretts, who referred to the video as "sidesplitting" and "comic gold".[11] On September 20, 2010, Macchio played the adult Carl Morelli in a staged reading of the Charles Messina play A Room of My Own presented by the Bleecker Street Theater Company.[12] In February 2011 it was announced he would compete on ABC's Dancing with the Stars. He was eliminated during the semi-finals, placing fourth in the overall competition.[13] Macchio appeared in Canadian band Danko Jones' music videos for "Had Enough" and "I Think Bad Thoughts", also featuring Elijah Wood and Jena Malone.[14] In April 2012, Macchio was cast in the film Hitchcock, based on the non-fiction book Alfred Hitchcock and the Making of Psycho, co-starring Anthony Hopkins, Helen Mirren, Jessica Biel and Toni Collette, and directed by Sacha Gervasi. Macchio portrays Psycho screenwriter Joseph Stefano.[15] In April 2013, Macchio appeared in the popular sitcom How I Met Your Mother in the episode entitled "The Bro-Mitzvah". From February to March 2016, Macchio co-stars with Mario Cantone in the Off-Broadway production A Room of My Own,[16] after having read the play in 2010[12] and 2014.[17]

Macchio reprises his role as Daniel LaRusso in Cobra Kai, a television sequel to the movie trilogy, that YouTube Premium released on May 2, 2018, with a ten-episode first season. He is also a co-executive producer of the series, along with William Zabka. The series is set 34 years after the events of the 1984 All Valley Karate Tournament and revolves around a down-and-out Johnny Lawrence (Zabka) who - seeking to get his life back on track, and obtain redemption for his defeat in the 1984 tournament - reopens the Cobra Kai dojo. This reignites his rivalry with a now-successful LaRusso, who has been struggling to maintain balance in his life without the guidance of his mentor, Mr. Miyagi, whose death in the series took place seven years before episode 1.[18]

At a celebration of the 30th anniversary of Karate Kid at the Japanese American National Museum in 2014, Macchio said that the 1947 yellow Ford convertible his character Daniel receives from Miyagi in the first film is sitting in the garage at his home in southern California.[21]

DJ Q-Ball of the Bloodhound Gang released a song on his MySpace called "The Ralph Macchio Memoirs". Poetry slam artist Big Poppa E references Ralph Macchio in his performance poem The Wussy Boy Manifesto. Nerdcore artist MC Frontalot mentions him in his song, "Braggadocio".[22] Macchio was featured in a brief cameo at the end of the No More Kings video for "Sweep the Leg".[23]

Macchio's character in the Karate Kid film inspired the "Daniel" song by English singer Bat for Lashes;[24] the front cover of the single shows Bat for Lashes with Daniel LaRusso's face painted on her back.[25]

The song "Ralph Macchio" by Norwegian singer Annie is about her crush on Macchio in her youth[26] over a 1980s-themed pop track.

In the TV series How I Met Your Mother, Barney Stinson asserts that Macchio's character, Daniel LaRusso, in The Karate Kid isn't the real karate kid; instead, it's Johnny Lawrence, Daniel's nemesis in the film. In the 8th-season episode The Bro Mitzvah, Macchio is invited to Barney's bachelor party, although Barney is disappointed in the surprise, expecting actor William Zabka, the "real Karate Kid". For the duration of the episode, the characters note the similarities between Barney and Macchio, by which Barney is disgusted. At the end of the night, the clown hired for the party's entertainment reveals himself to be Zabka.[27]

In the Parks and Recreation episode "The Master Plan", Andy Dwyer, unable to remember the proper name of Jean-Ralphio Saperstein, declares "That Ralph Macchio guy's a total douche" after Jean-Ralphio flirts with April Ludgate.[28]

Report a problem
Write to Ralph Macchio at FanPal • 2020