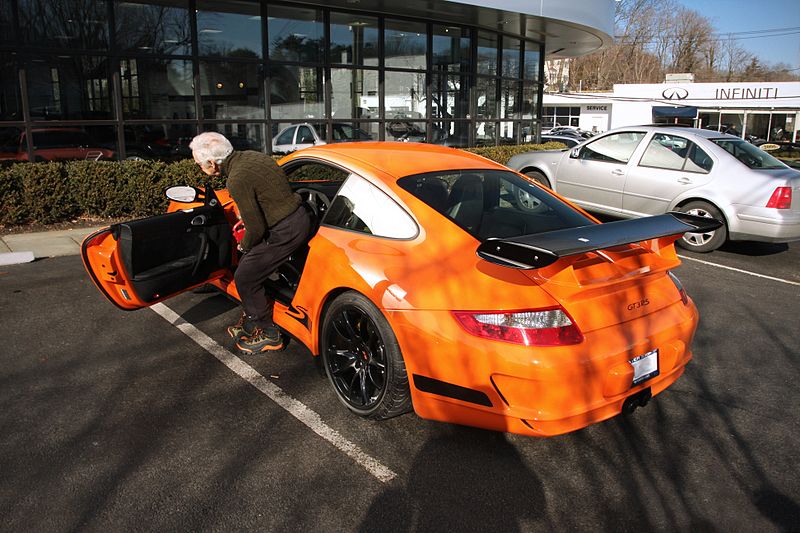 Ralph Lauren (né Lifshitz; born October 14, 1939) is an American fashion designer, philanthropist, and business executive, best known for the Ralph Lauren Corporation, a global multibillion-dollar enterprise. He has also become well known for his collection of rare automobiles, some of which have been displayed in museum exhibits. Lauren stepped down as Chief Executive Officer of the company in September 2015 but remains the Executive Chairman and Chief Creative Officer.[2] As of 2018, Forbes estimates his wealth at $7.2 billion, which makes Ralph Lauren the 91st richest person in America.[3]

Lauren attended day school followed by MTA (now known as the Marsha Stern Talmudical Academy), before eventually graduating from DeWitt Clinton High School in 1957.[16][17] He went to Baruch College, at the City University of New York (CUNY) where he studied business, although he dropped out after two years.

From 1962 to 1964 he served in the United States Army and left to work briefly for Brooks Brothers as a sales assistant before becoming a salesman for a tie company.[18] The Ralph Lauren Corporation started in 1967 with men's ties. At 28 years old, Lauren worked for the tie manufacturer Beau Brummell, where he convinced the company's president to let him start his own line.[19]

Drawing on his interests in sports, Ralph Lauren named his first full line of menswear 'Polo' in 1968. He worked out of a single "drawer" from a showroom in the Empire State Building and made deliveries to stores himself.[20] By 1969, the Manhattan department store Bloomingdale's sold Lauren's men line exclusively. It was the first time that Bloomingdale's had given a designer their own in-store boutique.

In 1971, Ralph Lauren Corporation launched a line of tailored shirts for women, which introduced the Polo player emblem to the world for the first time, appearing on the shirt's cuff. The first full women's collection was launched the following year. 1971 also marked the opening of Ralph Lauren's store on Rodeo Drive in Beverly Hills, California. This is the first freestanding store for an American designer.[21]

In 1972 the Ralph Lauren Corporation introduced a signature cotton mesh Polo shirt in various colors. Featuring the polo player logo at the chest, the shirt became emblematic of the preppy look—one of Ralph Lauren's signature styles. The tagline for the ad campaign was: "Every team has its color – Polo has seventeen."[22]

In 1974 he outfitted the male cast of The Great Gatsby in costumes from his Polo line – a 1920s-style series of men's suits and sweaters, except for the pink suit which Lauren designed especially for Robert Redford's Jay Gatsby. In 1977, Diane Keaton and Woody Allen wore Lauren's clothes throughout their Oscar-winning film, Annie Hall.[23]

The first Ralph Lauren fragrances, produced by Warner-Lauren, Ltd. were launched at Bloomingdale's in March 1978. Lauren, a fragrance for women, on March 12 and Polo, cologne for men, on March 26. This was the first time that a designer has introduced two fragrances - one for men and one for women - simultaneously. The company entered the European market, and went international, in 1981 with the opening of the first freestanding store for an American designer on New Bond Street in the West End of London, England.

A Polo Ralph Lauren store on the Magnificent Mile in Chicago

Ralph Lauren opened his first flagship in the Rhinelander mansion, on Madison Avenue and 72nd Street in New York City in 1986. Lauren re-created the building's original opulence with a young design consultant named Naomi Leff, with whom he had previously worked on Ralph Lauren Home.[24] The Polo Sport line was introduced in 1992 followed by over ten additional lines and acquired brands, including Ralph Lauren Purple Label in 1995 and Lauren Ralph Lauren in 1996.

On June 12, 1997, the company became a publicly traded company on the New York Stock Exchange.[25]

The 98-seat restaurant, RL, opened in March 1999 in a newly constructed building adjacent to the largest Ralph Lauren store at the corner of Chicago and Michigan Avenues. It was followed by the opening of two additional restaurants - Ralph's at 173 Boulevard Saint Germain Paris flagship store in 2010 and The Polo Bar at Polo's flagship in New York in 2015.[26]

The company launched its official web site, and online shop in 2000 as polo.com by RL Media (a cooperation between Ralph Lauren and NBC). In 2007, Ralph Lauren Corporation acquired the NBC share of RL Media and the web site was relaunched as ralphlauren.com. In 2008, Ralph Lauren Corporation launched a brand called American Living, exclusively for JCPenney. It was the largest cross-category brand launch in the history of Ralph Lauren and JCPenney. On 29 September 2015, it was announced that Stefan Larsson would replace the company's founder, Ralph Lauren, as CEO in November. Lauren will stay on as executive chairman and chief creative officer.[27]

Ralph Lauren has been featured on over 100 global magazines covers including Architectural Digest, GQ, Forbes, Town & Country, TIME and Vogue.

On December 20, 1964, he married Ricky Ann Low-Beer in New York City. Ricky is the daughter of Margaret Vytouch, and Rudolph Low-Beer. The two met six months earlier, in a doctor's office where Ricky was working as a receptionist and on alternate days teaching dance.[29] She is the author of The Hamptons: Food, Family and History.[30]

They have three children. Andrew Lauren (b. 1969) is a film producer and actor.[31] David Lauren (b. 1971) is Executive Vice President of Global Advertising, Marketing, and Communications at Ralph Lauren Corporation. In September 2011, he married Lauren Bush, the granddaughter of former U.S. President George H. W. Bush.[32] Lauren and David have two children and live in Manhattan.[33] Dylan Lauren (b. 1974), owner of Dylan's Candy Bar in New York City, was married in June 2011 to hedge fund manager, Paul Arrouet.[34] Dylan and Paul welcomed twins on April 13th via surrogate in New York City.[35]

In April 1987, Ralph Lauren underwent surgery to remove a benign brain tumor and made a full recovery.[36]

His cars have won "Best in Show" at the prestigious Pebble Beach Concours d'Elegance twice, his 1938 Bugatti Type 57SC Atlantic won in 1990 and his 1930 Mercedes-Benz SSK "Count Trossi" roadster won in 1993. In 2005 his collection was displayed at Boston's Museum of Fine Arts.[40] Seventeen cars from his collection were exhibited at the Musée des Arts Décoratifs, Paris in 2011.[41] In 2017, Lauren's now $350 million car collection took center stage during New York Fashion Week.[42]

Lauren stated in May 2014, "I hate when people call me philanthropic because I see it as more coming from the heart".[43]

In 1989 Lauren co-founded the Nina Hyde Center for Breast Cancer Research at Georgetown University Hospital in Washington D.C. in memory of the late Post fashion correspondent.[44] He served as chairman and created the name and symbol for Fashion Targets Breast Cancer, a charitable initiative of the CFDA that founded in 1994 that marshals the goodwill and services of the fashion industry to raise public awareness and funds for breast cancer internationally.[45]

In 2000 the Ralph Lauren Corporation launched its Volunteer Program, which energizes employees and creates meaningful connections with the communities in which they work.[46] On Friday, September 15, Ralph Lauren Corporation launched the Pink Pony Campaign, a national initiative to reduce disparities in cancer care by raising awareness as well as enhancing prevention, screening, and treatment in poor and underserved communities.[47]

The Polo Ralph Lauren Foundation established the American Heroes Fund following the September 11th attacks to allow Polo's 10,000 employees worldwide, as well as their customers, the opportunity to participate in the relief effort.[48]

In 2003, Ralph Lauren supported the establishment the Ralph Lauren Center for Cancer Care and Prevention in Harlem. The Center is a collaboration between Ralph Lauren, Memorial Sloan-Kettering, and North General Hospital in Harlem, New York City.[49]

The Polo Fashion School was established in 2004, in which Company executives work with inner-city youth to offer insights into the fashion business.[50] Established in 2006, the Polo Jeans G.I.V.E. (Get Involved Volunteer Exceed) campaign was created to inspire and encourage community service through volunteerism by supporting the efforts of dedicated volunteers and their causes.[51]

The Star-Spangled Banner, the original 1813 flag that inspired Francis Scott Key to write the United States National Anthem, was preserved by a $10 million contribution to Save America's Treasures from Polo Ralph Lauren in 1998. The flag was then unveiled on Wednesday, November 19, 2008 in a new gallery at the Smithsonian National Museum of American History, in Washington D.C.[52]

Ralph Lauren Corporation announced in July 2013 its commitment to restore the elite L'Ecole des Beaux-Arts in Paris, one of the most influential art schools in France.[53]

Lauren is a regular donor to the Democratic Party.[56]

Report a problem
Write to Ralph Lauren at FanPal • 2020